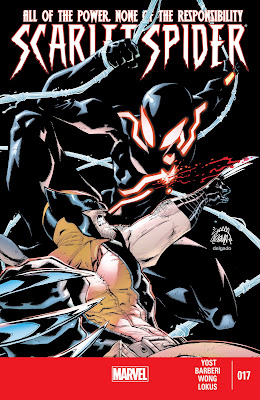 Well, it was only a matter time before Kaine would be making a trip back to his old stomping ground in the Big Apple and getting involved in the larger Marvel Universe once again.  And who better welcome him back (well, not really as you will see) than Marvel's most popular mutant and X-Man that already appears in virtually every Marvel comic (and who it just so happens is getting yet another movie coming out this summer), Wolverine?  So let's see how nice these two get actually along in part one of "Wrath."

We open the issue with a gunshot victim brought into the Park Plaza Hospital at the Houston Medical Center.  However, when Dr. Donald Meland examines the victim, he finds a very odd obstruction: a large orange ball inscribed with Kaine’s name. 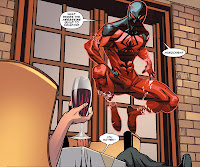 The next scene is at a restaurant in the River Oaks neighborhood in Houston, where the leader of the Assassin’s Guild, Belladonna, and her servant, Smithy, await Kaine’s arrival (they also make a brief mention of someone called “The Red Death”).  Sure enough, Kaine, having used the cloaking device on his costume to sneak-in, makes an appearance by punching Smithy.  When Kaine demands to know what the Assassin’s Guild wants, Smithy gets his second wind and says Kaine is dead, but Kaine, having noticed how Smithy’s hands have healed from their last battle, stabs one of them with a broken piece of chair.  Belladonna orders the humiliated Smithy to leave, then, after Kaine returns her the ball from the gunshot victim, reminds him that if he wishes to prevent the Assassin’s Guild from killing his friends, he owes them a murder and that it's now time to fulfill his end of the bargain.  She hands Kaine a manila envelope which reveals his target: none other than the X-Man, Wolverine.  Reluctantly, Kaine accepts the assignment.

Back at the Four Seasons, Aracely insists on going with Kaine to New York, not allowing him to get a word in edge wise as she comes up with all kinds of reasons why she should go.  Finally, when she says that she just really wants to see New York, Kaine reveals that he has already made a forged passport for her and says that she is, in fact, going with him.

As we see both Kaine and Aracely fly to and arrive at New York, Kaine thinks about how, despite all of his best efforts to leave the city and his old life behind him after “Spider-Island” how he’s once again been forced to come back.  Aracely, however, is ecstatic, from flying to New York first-class, to riding in a limousine (all bought and paid for by the Assassin’s Guild) to seeing a glimpse of Spider-Man (or rather SpOck) swinging past. 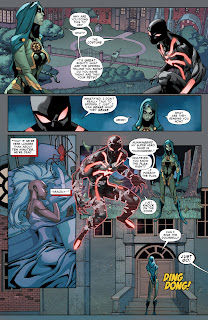 Later that evening, Kaine and Aracely are outside the Jean Grey School for Higher Learning in Weschester doing reconnaissance via Kaine’s ability to “talk” to spiders.  Kaine has altered his costume back to the original “Big Time” stealth suit and Aracely is now wearing a costume of her own and has given herself the codename “Hummingbird."  After Kaine has located Wolverine, he tells Hummingbird they cannot stay longer than ten minutes, and, as he activates his stealth mode, tells her to stick to the plan--which is Hummingbird causally strolling up the front door and ringing the doorbell. The school janitor, Toad, answers the door and Hummingbird uses her psychic powers to convince him that she's “the scariest mutant ever."  Toad flees in terror, allowing both Kaine and Hummingbird to slip inside.  Meanwhile, hidden outside, a sniper is in communication with Belladonna, who tells the sniper to report back when either Wolverine or Kaine is dead.

During their search of the mansion, Kaine and Hummingbird split up and, via her psychic powers, stay in contact.  However, Hummingbird accidentally encounters Rachel Grey-Summers.  Hummingbird tries the same trick she used on Toad against Rachel which doesn’t work given Rachel herself is a telepath.  Rachel then attempts to probe into Hummingbird’s mind for answers, and her surprise, but when she does Hummingbird’s voice changes and declares themselves to be “ Huitzilopochtli“ and a psychic backlash is unleashed against all the telepaths in the school and causing the students to panic.

Hummingbird tries to apologize as she has no idea how she’s doing this, but Rachel, barely getting her bearings, is able to sense Kaine and tells Beast to attack.  Beast is able to use his heightened senses to detect Kaine and, in spite of Kaine having the same scent and looking like Spider-Man, knows Kaine is not the real Spider-Man.  Kaine is able to hold his own against Beast when he is also confronted by Iceman.  Kaine is able to take them both down when he gets ambushed by Kitty Pride, who threatens to use her phasing powers to scramble Kaine’s brain.  Teen Jean Gray also arrives, saying how something is inside her head, and that moment, Hummingbird shows up with an unconscious Rachel, still apologizing for what she’s inadvertently doing.  A fear-induced Kitty lets Kaine go, and Kaine is able to fight her, and the other X-Men off. 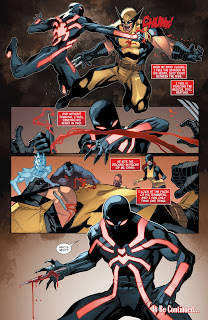 At that moment, Wolverine arrives, claws extended, and he and Kaine do battle.  As they fight, Kaine notes that, despite being stronger and faster than him, Wolverine is far tougher and more resilient, reminding Kaine of his encounter with the Wolves.  When Wolverine slashes Kaine across the face, suddenly, Kaine’s Other thinks “Prey” and his stingers retract--and then Kaine stabs Wolverine in the heart.

And as Wolverine falls dead to the ground, Kaine tells the shocked X-Men, “Who’s next?”  To be continued…

First thing to mention right off the bat is that Carlos Barberi has taken over penciling duties on the title and it’s much welcomed change.  Readers of my past Scarlet Spider reviews know that I’ve said that Khoi Pham had been gradually improving with each issue, but coming off the heels of Ryan Stegman, he had a tough act to follow that he never quite live up towards.  Barberi, however, has a much cleaner and (albeit with some few but glaring exceptions) a much better handle at showing a consistent body proportions with the characters.  One drawback however is that, based on the way he lays out his panels, his figures can look a bit stiff and his action sequences appear cramped and crowded, but otherwise it looks decent and is easy to follow.

As for Chris Yost’s script, I loved the interaction between Kaine and Aracely (and "Hummingbird" is such a cool name for a super-heroine).  This being their first official superhero team-up, Yost once again shows what great chemistry these two have and why Aracely has been such a great supporting character in this series, as her sunny disposition, enthusiasm, and occasional naïvety offers an appropriate counterpoint to Kaine’s more cynical, no-nonsense professionalism.  I also appreciate that Yost makes the X-Men formidable opponents and intelligent enough to recognize that Kaine is not the real Spider-Man (as opposed to say the Superior Spider-Man, but that’s a whole separate issue).  Unlike some other comics where superheroes have made a guest-star appearances, Yost never forgets that this is Kaine’s title and that the X-Men are in service to Kaine’s story, not the other way around.

One thing that Yost hints at, and which I hope gets explored in the next part, is how Kaine shares a lot of similarities with Wolverine, and not just because both characters have stabbing weapons that retract from their forearms.  They are killers are loners by nature, both of whom were scientific test subjects, and who are trying to atone and make amends for their past.  In fact, I’d say Kaine now has far more in common with Logan than he ever did with Peter, despite his sharing the same DNA.

If I do have one complaint, it’s the cliffhanger ending, in that while it is surprising, it’s all but guaranteed that Wolverine won’t stay dead, not when he’s the lead in so many other X-Men titles, and common sense dictates that Marvel wouldn’t kill off such an A-list character like him in a Spider-Man spin-off title (although it certainly would be shocking if they did).  Even so, this is a very good and enjoyable opening salvo to this three-part story and am looking forward to the eventual Scarlet Spider and Wolverine team-up.
Read More

So, being a Spider-Man website, and having some time to post some Amazing Spider-Man 2 movie photos, I decided to make use of that time and do exactly that.

Below we have some photos, courtesy of Superherohype and Fan Girl 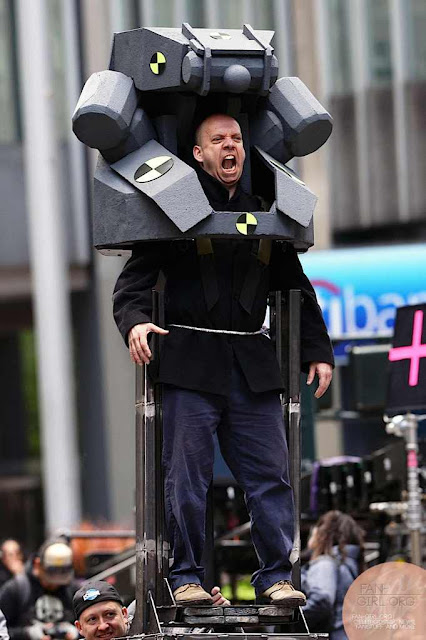 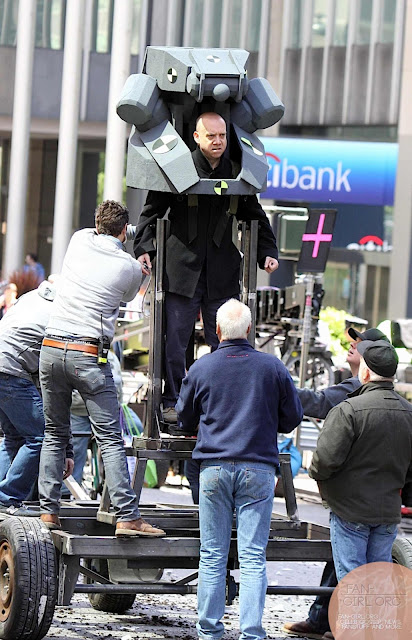 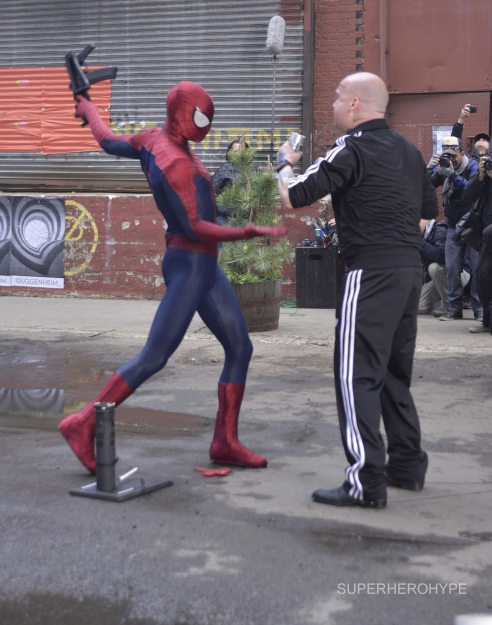 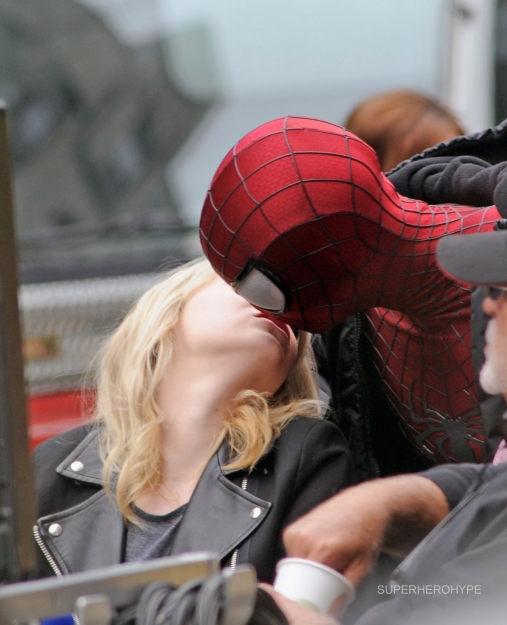 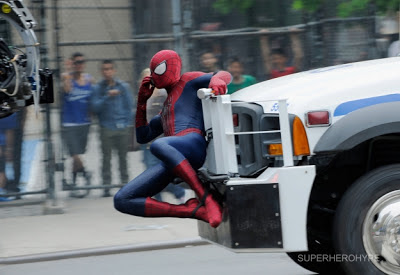 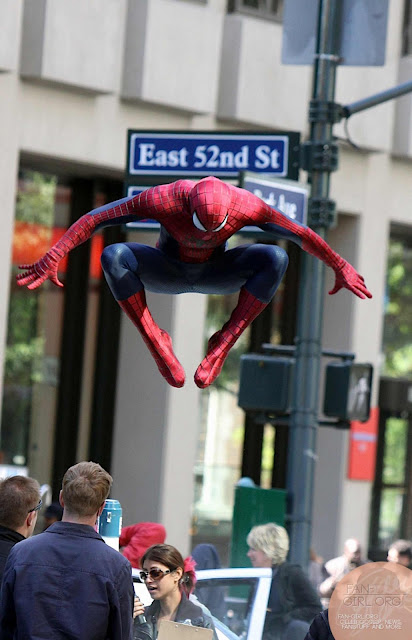 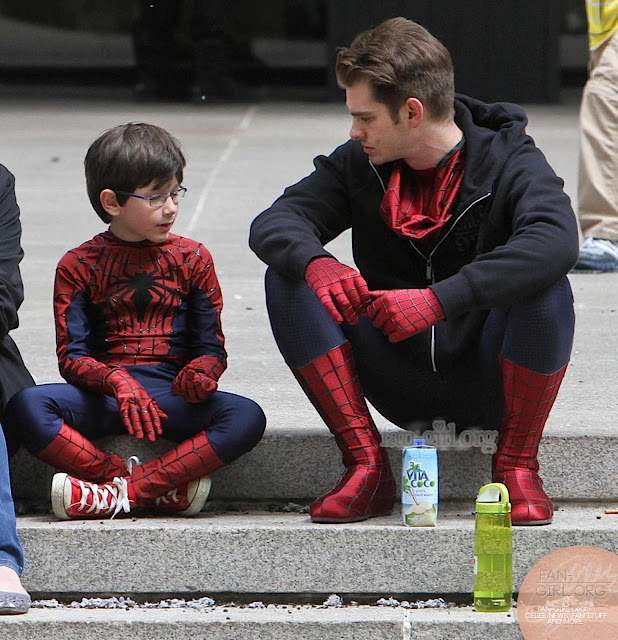