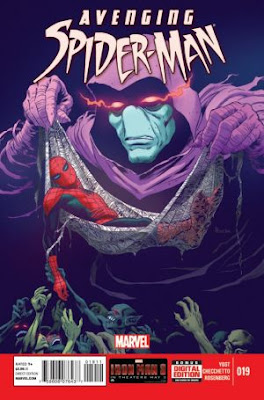 Otto Octavius, A.K.A. the Superior Spider-Man is trapped inside his own mind, having an endless nightmare.  After briefly being attacked by Peter Parker's ghost (which Otto dismisses as not being real), Otto is tormented by a monstrous manifestation of his father.  Meanwhile out in the real world, Spider-Man's physical body is being possessed by a fear worm, who is using it to kill Sleepwalker in a subway station.

Sleepwalker eventually finds Otto in his dreams and attempts to help him overcome his demons so he can regain control of his body.  While Peter's ghost is able to hold back Otto's physical body from killing Sleepwalker, Otto manages to overcome his fear of his father by fully embracing his new identity as Spider-Man.  Otto is able to pull the fear worm off his body, allowing Sleepwalker to destroy it.  Afterwards, Otto ponders why his physical body hesitated to kill Sleepwalker and thinks back to Peter's ghost attacking him earlier, remarking that some aspects of his dream seemed so real...

Chris Yost and Marc Checchetto really nailed their portrayal of the landscape of Doc Ock's twisted psyche.  Details like Spider-Man's shadow possessing tentacles, and Otto's monstrous vision of his father being a spider/octopus hybrid made the trip through Otto's head a visual treat.  Yost also found a great use for ghost Peter, giving him an important role in the story without him pestering the reader with his unnecessary commentary (as he did over in Superior Spider-Man).

Yost and Checchetto manage to deliver another great installment of Avenging Spider-Man, this time making use of a more obscure Marvel hero.

Electro seeks revenge against the god of thunder!  Can the Superior Spider-Man stop his former colleague? 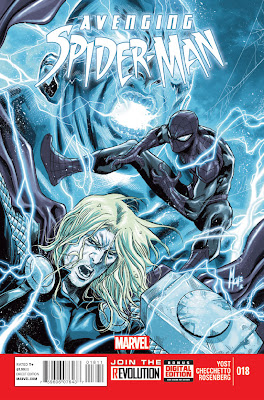 Electro returns to Earth determined to get revenge on Thor, who shot him into space during Ends of the Earth.  Electro quickly enlists the help of A.I.M. to kill Thor.

Otto Octavius detects Electro's energy signature and, as Spider-Man, attempts to warn Thor that Electro is back and may attack him.  Thor however, brushes Spidey off, not considering Electro a threat.  Spider-Man eventually tracks Electro down to one of A.I.M.'s laboratories.  Despite Spidey's intervention, A.I.M. is able to transform Electro into an anti-matter version of himself by converting his energy form's electrons to protons.

Electro quickly moves to attack Thor with Spider-Man following close behind.  Spidey warns Thor that direct contact between his lightning and Electro's anti-matter would cause an explosion that could level New York State.  As Thor and Electro duke it out, Spidey is able to build a device from the equipment in A.I.M.'s laboratory that is able to destroy the protons in Electro's energy form, thus saving the day.

Back in his underwater lair, Spider-Man muses over how Thor was willing to sacrifice his life to save New York, and wonders how far he is willing to go to get what he wants as he looks over Sandman and the newly captured Electro.

Chris Yost continues to show that he has a great knack for writing Otto Octavius as Spider-Man as he manages to successfully show Otto slowly growing as a character.  Although his arrogance remains high, the fact that Otto was still able to gain some measure of respect for Thor by the end of the story is a significant step for the character.  But just when we think that Otto is growing into his new role as a hero, Yost gives us a scene like the one at the end of this issue showing just how twisted this new Spider-Man is, with Otto keeping both the Sandman and Electro in glass jars, like bugs caught in a spider's web.  Otto's unique approach to crime fighting continues to lead to some very cool, very different Spider-Man stories.

Taking over from Paco Medina on art duties is the very talented Mark Checchetto.  Checchetto's pencils are detailed and clear, continuing the trend of Avenging being a great looking comic book and an essential companion to Dan Slott's Superior Spider-Man.