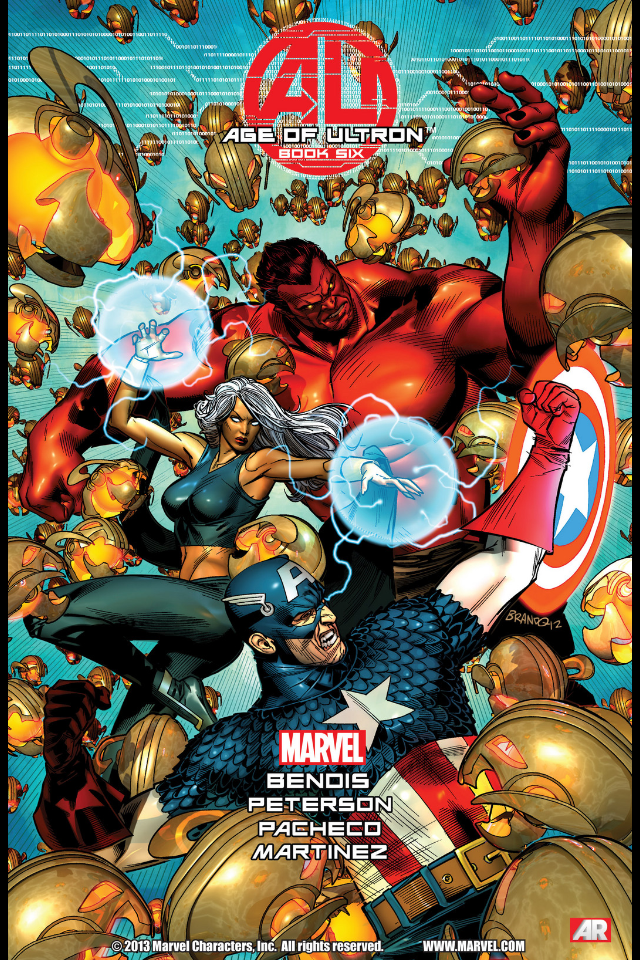 Hello everybody & welcome to my review of Age of Ultron #6. Once again I'm really sorry for the delay and I'll try and get my review of the next issue out as soon as I can. 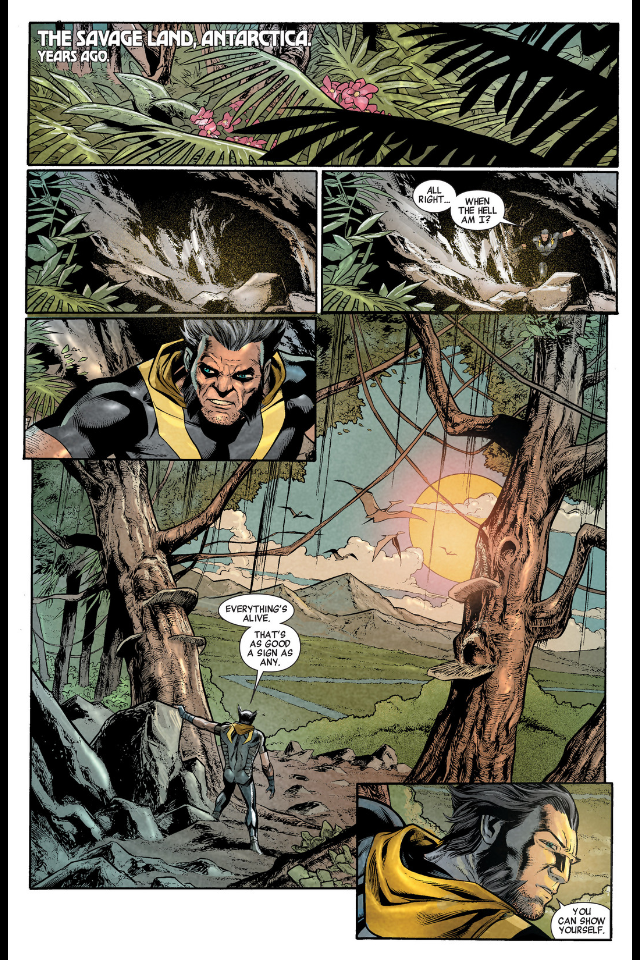 Wolverine materialises in Nick Fury Sr.'s bunker in the Savage Land years in the past. After stumbling out of the cave, he says that the other person can show themselves now. The Invisible Woman becomes visible at that moment, having followed Wolverine from the present day instead of going with Fury's team. She says that Wolverine has that look in his eye and she knew he wasn't going to listen to Captain America. When Logan asks if she's here to stop him, Sue replies that she honestly doesn't know, as the situation is insanely complicated. Wolverine disagrees and asks Sue if she would kill someone to save her children (who she lost along with the rest of the Four in the Fantastic Four AU tie-in issue). Sue doesn't answer.
Wolvie suddenly picks up a scent and orders Sue to cloak them both, which she does. The scent turns out to be Fury, who lands nearby in a flying car and heads into the cave, presumably to inspect the bunker. When he re-emerges a short while later, he is shocked to find the car gone, with his bag dumped on the ground. Logan & Sue, having obviously stolen the car, quickly put some distance between themselves and the Savage Land.

In the future, Fury & his team emerge from the cave. They are surprised to find that the Savage Land is not a wasteland, but in fact anything but. Cap quickly notices that Sue Storm is missing, which annoys Fury as she was supposed to be their "stealth component", though Iron Man points out that invisibility wouldn't have worked with Ultron. Fury sends Quicksilver to Manhattan as recon, with he and the rest of the team flying there via Storm's powers.

Back in the past, Wolverine and Sue arrive in New York. Wolvie lands the car and swiftly picks up Pym's scent. He orders Sue to stay in the car. Inside his lab. Dr. Henry Pym is examining Dragon Man. He is also recording the seventh in a series of audio logs documenting this examination. 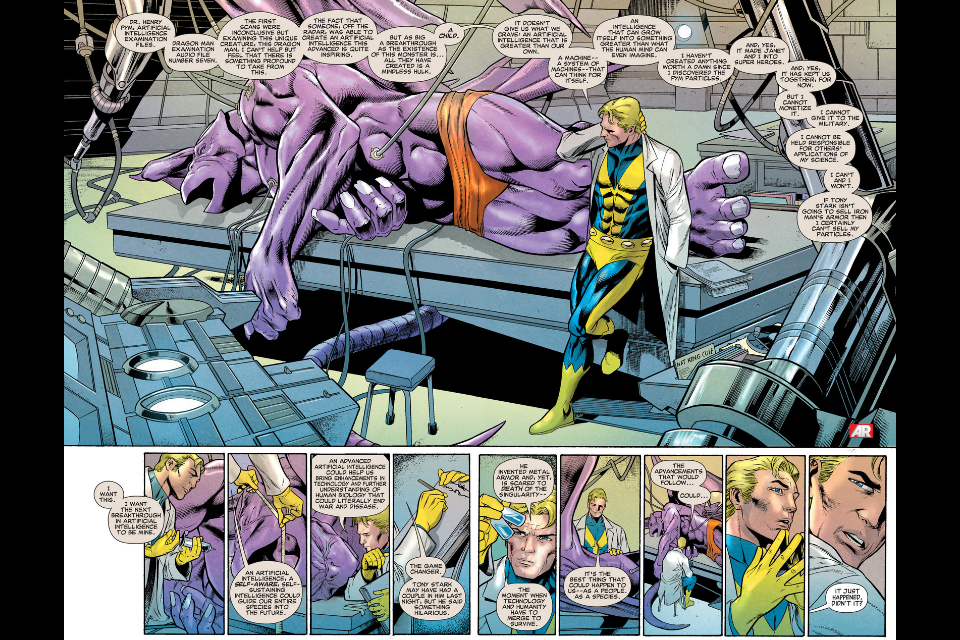 During his recording, he begins to get the idea to create Ultron, which Wolverine happens to witness as he enters the lab. After a brief, vague explanation as to why he's here, Logan draws his claws. Pym grows to giant size and attacks him.

Meanwhile, in the future, Fury's team arrive in New York, which has been transformed into what Tony dubs "a technological masterpiece". They are swiftly attacked by a swarm of Ultron drones (which are now just heads for some reason?). Though the heroes destroy many of them, the drones continue to arrive in large numbers and gradually, the heroes begin to be overwhelmed. One drone in particular manages to decapitate Captain America with a laser blast to the head.

In the past, Wolverine gains the upper hand against Pym. He prepares to strike the killing blow, but it's blocked by the Invisible Woman, who tries to convince Logan that they can't do this. Wolverine reminds her not only of the loss of her family, but the hundreds of innocent people that have fallen thanks to what Pym will create. Before Pym can argue otherwise, Susan lowers the shield and Wolverine kills him with a single blow. Sue asks what they do next, to which Wolverine responds, "Now we go home...and whatever is watin' for us...Hell, we know it's got to be better than what we left"... 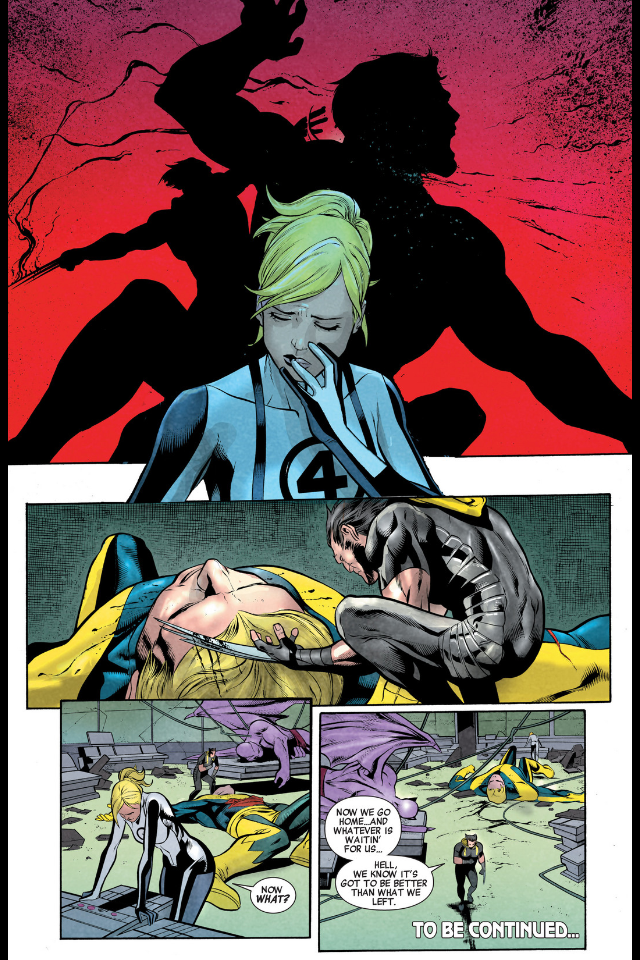 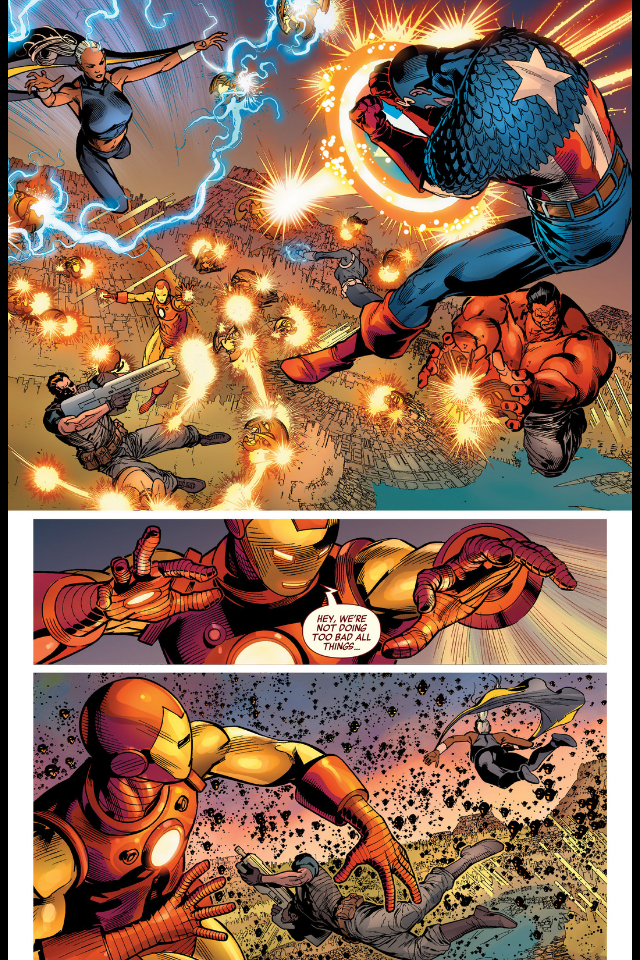 Age of Ultron has certainly gone in some interesting directions since it's opening issue, but it's here that we reach a game-changing moment in the series with the death of Hank Pym (well at least we got to see him for a little while anyway).
Wolverine & Invisible Woman are certainly an interesting pairing and Bendis find a way to make it work with their conflicting moralities. I could definitely buy that Sue under the right circumstances would let Wolvie kill Pym and these are definitely the right circumstances. Sue has lost her entire family to Ultron and however much Pym tries to dodge around it, he is responsible for every life Ultron has taken. I'm still a little disappointed that we haven't yet seen the modern version of Pym yet, but I'm holding out a little more. Don't let this twist fool you. Pym will be revived by the end of this. As for the future parts, not much happens here with the exception of the death of Captain America, thought the impact isn't that strong due to the knowledge this will soon be changed back to normal.

For this issue we have not one, but TWO artists taking over from Bryan Hitch. Brandon Peterson handles the artwork in the future whilst Pacheco serves as penciller to the past segments. Right now, I prefer Pacheco's work as it feels more polished that Peterson's, which is quite sketchy in places and the facial features look a little weird occasionally. Don't take this to mean that I didn't enjoy Peterson's artwork though, the action sequence with the Ultron swarm looked great. I like the touch of having Past Hank Pym & Past Nick Fury's dialogue balloons shaded a different colour to the future characters.