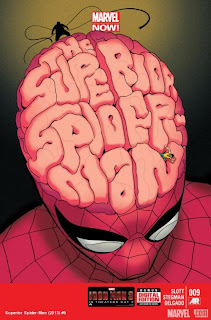 
The Story
Honestly, as far as the story itself is concerned there isn't too much that takes place. In Superior Spider-Man # 8, Spider-Ock has discovered the subconscious living memories of Peter Parker, still wondering about in his brain.

In this issue, Ock is ready to extract Peter and exterminate him once and for all! Peter Octopus decides that although he initially kept Peter's memories to help him live his new life, he decided it was too risky seeing that Peter's memories had taken a life form of its own.

Pretty soon we see the Daily Bugle building inside of Peter's mind disappearing. He finds himself forgetting all that took place at the Bugle. He puts up a fight for a while, but eventually regains his memories of the Bugle. We then see the Bugle rebuilding itself.

Peter manages to put up a small fight for his body in the real world, taking control of his own right hand for a moment. Eventually however, Ock has enough and decides he has to get into his brain and settle this once and for all.

Peter puts up a major struggle with Ock for his own mind. He calls on all his friends and family to come help him - Jameson, Mary Jane, Gwen, Captain Stacy, Uncle Ben and the whole gang. Unfortunately, Ock also knows Peter's mind and calls forth his greatest fears - his greatest enemies!

In no time, Ock begins to win the fight, causing Peter to forget even Uncle Ben. With absolutely nothing left, Peter changes to The Amazing Spider-Man. He challenges Ock to a final battle in which winner takes all. At first, Ock is afraid and begins running away. Spider-Man taunts Dr Octopus until he almost gives in. At that point however, Ock realizes that he too is a Spider-Man, The Superior Spider-Man. 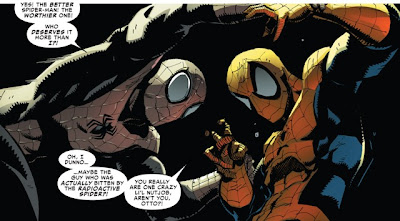 We soon have a battle between the two. While the Amazing Spider-Man gains the initial upper hand, the Superior Spider-Man wins the battle. The issue ends making the reader believe that Peter Parker is gone for good.

As I mentioned at the start, there is not much story in this issue. Essentially, Peter and Ock fight for Peter's mind, and Ock wins, the end.

However, I would like to point out that this whole battle that takes place in Peter's mind is really just a mind game. Each time Peter gains the upper hand, it is because he is playing mind games with Ock. The same can be said for Dr Octopus.

So, what has happened to Peter Parker?

I doubt any of us really think he is gone for good. I certainly don't believe he is gone. Peter Parker is either:


In a way, I am glad that Ock won the battle, not because I like him better as Spider-Man, but because I can't wait to see the Goblin kick his ass and tell him that the real Peter put up a better fight.

I'm also guessing Norman Osborne will have a role in bringing our Friendly Neighborhood Spider-Man back from the 'dead.' 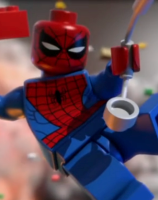 In this latest trailer, we have what looks like a giant LEGO Galactus as the bad guy.

Would the Silver Surfer show up?

Check out the teaser trailer below