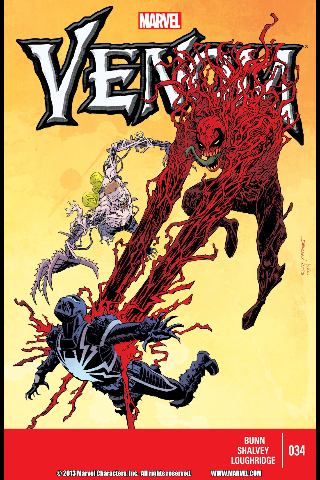 Hello everybody and welcome to my review of Venom #34. Well it's taken a bit longer than I thought, but it's finally here. Venom VS Toxin, feat. the U-Foes' Experiment. LET'S GET READY TO RUMBLE!!! 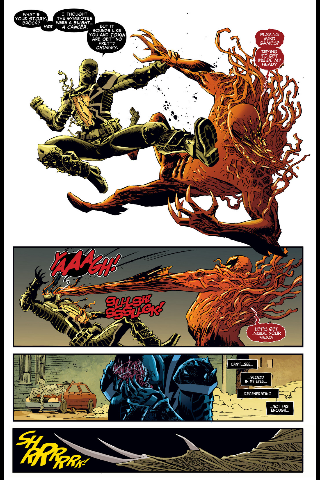 Not wasting time after his surprise reveal, Toxin attacks Venom, viciously slicing into him. Venom quickly retaliates however, knocking Toxin back. He doesn't have much time to recover however, as he soon has to dodge Toxin attempting to crush him with a car. As the symbiote heals Flash's wounds, Toxin rips through the car to get at Venom. Drawing his pistol, Venom fires some shots at Toxin (which of course do absolutely nothing) and leaps in to fight, pointing out to Eddie his recent views that the symbiotes were like a cancer. Brock assumes Flash is playing mind games and trying to get in his head, so he gets inside Flash's, stabbing him in the face with a tendril. He explains to Flash while the Venom symbiote heals his face that he and Toxin have an understanding. Once they've killed Venom, their going to kill one another, or try to anyway. This fight is interrupted by the Experiment, which causes Toxin to change targets. He quickly incapacitates the Experiment. Venom attempts to prevent Brock from killing it, but is quickly grabbed by a tentacle from Toxin. 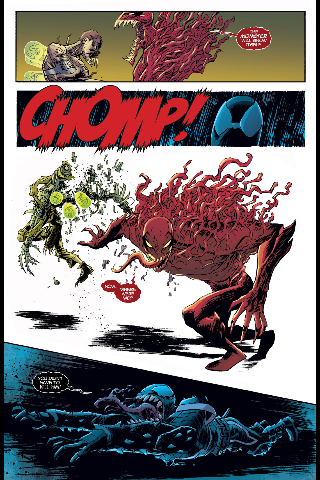 Toxin mocks Flash as he smashes him into various objects, stating that he's deluded if he thinks he's playing the hero, and that sooner or later, the monster will show itself. Brock then kills the Experiment. Venom, filled with rage, leaps forward and bites off Toxin's arm, fighting with more ferocity. As they battle, Flash notes that Eddie & Toxin have bonded really fast while Toxin continues to mock him, saying he must know what a danger he is. The fight quickly starts to turn in Toxin's favour and he eventually stabs Venom, the symbiote barely holding Flash together. As a last resort, Flash unveils the serum he was given by Beast to control the symbiote and stabs Toxin with it, causing the symbiote to recede from Eddie's body. He leaves Venom, nearly passed out on the sidewalk, saying he's not done with him yet. The canisters containing the creatures attached to the Experiment's back leak out onto the floor as Venom loses consciousness.
Later, at the apartment block where Flash lives, Andi comes across Flash lying battered and bruised on the rooftop. She's shocked at how injured he looks, though Flash jokes that she should see the other guy. Flash tells her he's alright, but she persists, telling him they need to get him to his apartment, so Flash shouts at her to leave him alone. Clearly hurt by his outburst, Andi leaves, making sure to call Flash an ass as she does so. Flash feels guilty, but reminds himself that he can't get close to anyone, especially now that Toxin's around.

Meanwhile, the mechanical creatures that were attached to the Experiment begin to multiply, infecting a bunch of homeless people under an archway. They determine Venom and Toxin as the primary threats, before designating them both as targets... 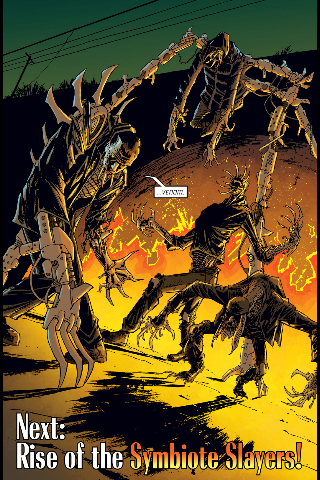 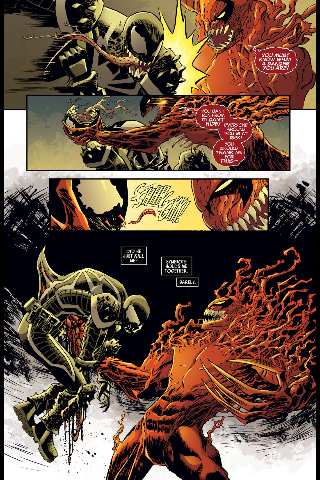 Wow, this was great. I was starting to worry that after building this up for four issues, Cullen Bunn wouldn't be able to deliver on the showdown between Venom & Toxin. Well he certainly proved me wrong. The fight in question was well handled by Bunn. I like that Flash called Eddie out on being bonded with Toxin. Toxin & Eddie's bonding is different to what we've seen before with symbiotes and hosts. These two don't like each other, but their held together by a mutual hatred of Venom. I do kind of question why he leaves Venom alone when Flash causes the Toxin symbiote to recede? I suppose we could say that the drug weakened Eddie as well, but considering that he's a 300 pound bodybuilder and that Venom was weak and on the floor, that just looked a little odd.
The scene with Flash and Andi was also handled well. This arc has been about Flash adjusting to life in Philidelphia and his increasing loneliness, and that scene really helps to forward that. While Flash is becoming an overall somber character, it's tempered by the fact that he's proactive and willing to make sacrifices. It's all the better seeing this character work with Flash given what's going on in Superior Spider-Man. When these two eventually come to blows (because, let's face it, it would be a massive missed opportunity if they don't.) I will definitely be rooting for Flash (something I thought I would never say).

I've really enjoyed Declan Shalvey's artwork on the series and this issue was no exception. The fight scene between Venom & Toxin is brutal and Shalvey renders that brilliantly. I'm hoping that he's going to "stick" around for a while, especially after what the last page indicates. Cullen Bunn has finally found his footing with Venom and I've really enjoyed reading this story arc. I'm really excited for what's coming next. Here's hoping Rise of the Symbiote Slayers will be as good as this story arc... 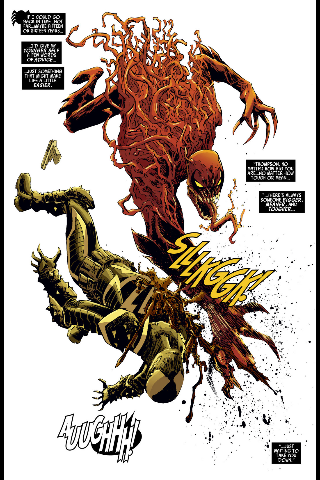