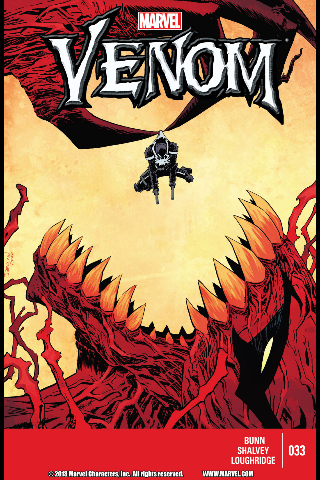 Hello everybody and welcome to my review of Venom #33. 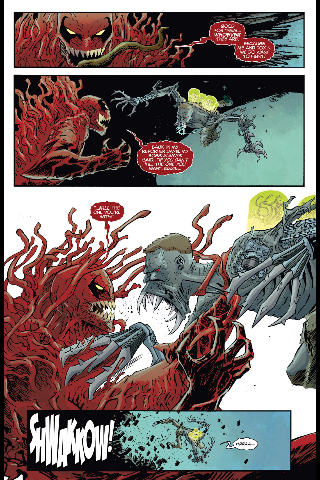 Picking up where the last issue left off, Toxin attacks the Experiment (hey that's not a bad name, I think I'll use that), who fights back despite not really wanting to. After a brief fight, Toxin subdues the Experiment, stating he was going to let him live long enough to tell him where to find Venom, but he'd rather get one more freak off the street. As he prepares to kill the Experiment however, several hooked tentacles burst from the Experments stomach, wounding Toxin, who hurls the Experiment away. After healing, Toxin realises the Experiment has fled. He decides to let him live, reasoning that Venom will will be coming for him soon.

The next morning, Flash Thompson converses with Beast via webcam, telling him about his encounter with the Experiment last night. Beast tells him that he may be able to help the man, assuming Flash can bring him to Beast. He offers to help, but Flash replies that he's good. That afternoon Flash attends an AA meeting. While he talks about his alcohol problem, he thinks about how these people don't understand him and that he doesn't belong amongst them.

Later that night, at the kennels, the receptionist there hears a disturbance among the dogs. She investigates only to find that they've all been killed by the Experiment, who apologises just before he leaps to attack. The woman rushes outside with the Experiment in hot pursuit, only to be saved by Venom in the nick of time. Venom quickly subdues the Experiment with webbing and ponders over whether or not Beast will be able to cure him. He is then interrupted from his thoughts by Toxin, who states that he'll take care of the Experiment as soon as he's done with Venom... 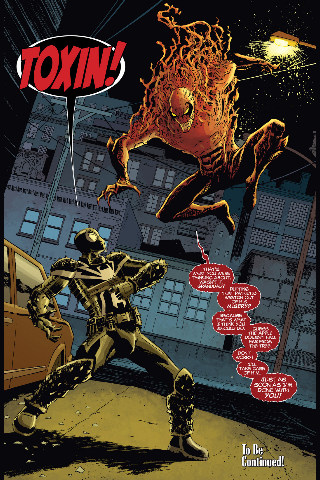 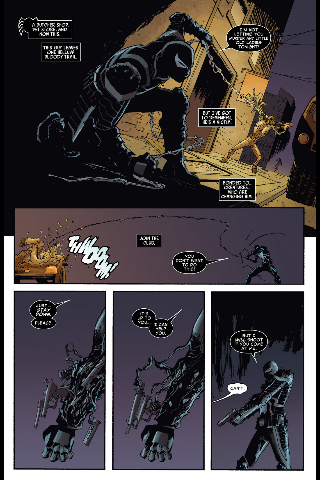 Okay, so Cullen Bunn is taking his time in having Flash and Eddie come face to face. It helps that he has some interesting character work with Flash to fill the issue. I enjoyed Flash's conversation with the Beast, Bunn has a good voice for Hank McCoy and it's nice to see them maintain a friendship even though their no longer Avengers. The AA meeting was also very well written, though I think it was a missed opportunity not to have Eddie Brock be there too, it would have added a nice bit of tension to the scene.

Speaking of Eddie, it's nice to see him actually DO something in this issue. If we aren't going to see him face off with Flash then we might as well see him in action. I didn't expect the Experiment to survive this issue, so it was interesting that he managed to hold his own against Toxin. It's also nice that Venom takes a proactive approach to finding him, and I was left super excited by the final page.

I'm still really enjoying Declan Shalvey's artwork. Toxin & Venom both look great and the gritty look continues to serve the series well. Cullen Bunn is definitely hitting his stride with this storyline and I hope he can maintain it to the end. If so, the we're looking at a great story for Venom... 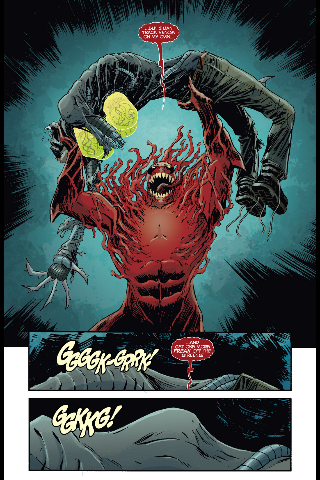