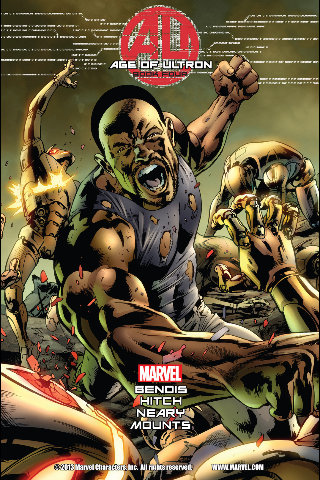 Hello everybody and welcome to my review of Age of Ultron #4. I apologize for the delay as there have been some issues with my laptop's Internet connection. I hope you all enjoy the review. Luke Cage stands in disbelief as he faces the Vision, who repeats is question of what Cage offers. Luke attempts more questions which the Vision gives vague answers to. He suddenly goes quite only to yell that Ultron controls them all from the future, before clearly gasping in pain and reverting to his previous question. The supposedly unconscious She-Hulk states she's heard enough and throws Cage through the wall and out of the building, instructing him to tell Tony Stark what he saw. She attacks the Ultron Sentinels, but is swiftly killed when one of them fires a laser through her head, the sight of which causes the Vision to hang his head in shame. Cage is attacked by more Ultron's. He holds his own until several of them fire at him, creating a massive nuclear explosion.
In San Fransisco, Moon Knight & Black Widow are going over Nick Fury's doomsday scenarios. It turns out Fury has an underground bunker specifically for the end of the world located in the Savage Land. Back in New York, the superhero resistance are also leaving for the Savage Land via Storm's control of the wind. They witness the explosion and go invisible thanks to Invisble Woman. In Chicago, Red Hulk catches up to Taskmaster and brutally kills him, saying he can no longer trust him.

As Rulk leaves Chicago the story jumps eight days later to the resistance arriving in the Savage Land, which is full of craters. The heroes also notice a crashed Quinjet nearby. They are then greeted by Ka-Zar, who asks that they follow him. They arrive at a small village, which Ka-Zar confirms is all that's left of his people. He points to a nearby shack, telling the heroes what they seek is there. Emma Frost & Wolverine realises that Cage is in there (having flown and crashed the Quinjet) and that he's dying of radiation poisoning. Reading his mind, Frost relays what he knows to the other heroes. That Ultron is in the future with the Vision as his conduit in the present. As Logan wonders aloud what to do next, Rulk arrives with Black Widow & Moon Knight, answering that they go get Ultron, and thanks to Nick Fury, they know just how to do it. 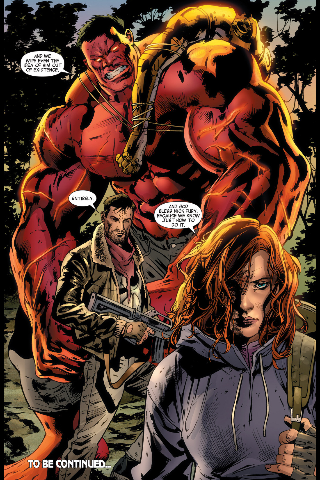 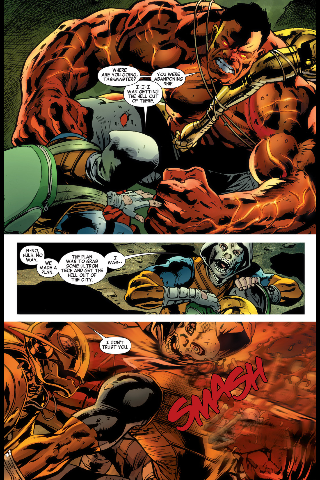 Things are starting to gather pace now. Now that we've been properly exposed to this dystopian future, Bendis is starting to inform us of the bigger picture. Ultron being in the future is a smart move on the robots part and it's quite twisted the way in which he's using the Vision, who is just as much a prisoner as a servant. The deaths of Luke Cage & She-Hulk are well handled, Cage's in particular. Seeing these two fall to mere drones shows how dangerous the threat is. Taskmaster's death on the other hand is a bit of a waste, the character didn't serve any purpose at all, which leads me to assume the death was merely for shock value.
The move to the Savage Land gives Bryan Hitch a chance to refresh the scenery a bit. Post-apocalyptic New York was starting to get repetitive anyway. there were a few niggles here and there though. Luke Cages hair looks like it was added quite hastily to help keep the story up to date and Taskmaster's mask looks a little weird. However, like I said, these are only a few niggles and they don't wreck the artwork, they just stand out a bit. Bendis's voices for the characters does become a little blurred here and there during the group scenes, but that's forgivable as he has a lot to work with.

A swift shipping schedule has ensured that the slow pace of the first three issue wasn't a problem. Now that's over and done with, It's time to see the heroes fight back and fight back hard, and it looks as though they're going to do just that... 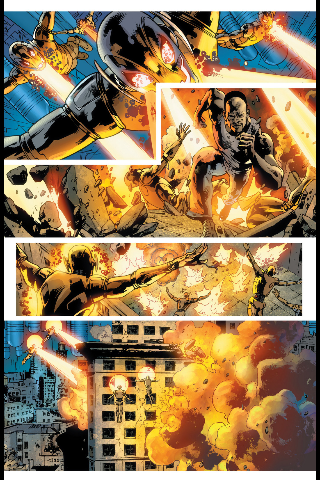