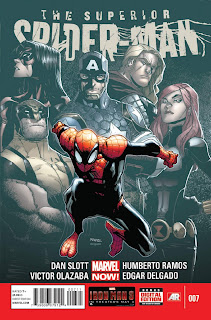 Greetings! I've finally managed to scrape up some time to write a late review for Superior Spider-Man 7.

Many thanks to our other great reviewers out there who help write stuff so the website is not static!

The Story
This issue begins with Norah and Phil Urich interviewing Dr Elias Wirtham. He intends to reopen the infamous shelter which Martin Li aka Mister Negative used to use to secretly run his operations. The good Doctor is however, none other than Cardiac, a semi crook who steals things to find solution that can help improve the world medically. We see Cardiac, visiting his patients in his 'lab' just like a normal good doctor would.

Back at Parker's place, Peter Octopus is sleeping soundly. Peter Parker, still trapped in Ock's head however is wide awake. Parker tries as hard as he can and manages to move his right hand! He tries to write a note to warn others. However, he has lost his ability to spell words. Just then, the phone rings, waking Peter Octopus. Peter Parker, pushes the notebook on which he tried to spell something into the trash, just before Ock wakes up. ( I know this does not make sense to someone randomly reading who has not been following the Superior Spider-Man)

As Spider-Man, Ock swings to the location of threat. Cardiac is busy storming the "Boneyard" looking for something he can use to improve his medical research. He is attacked by Spider-Man and is almost shredded to bits by Spider-Man, but Peter, in his head, manages to stop him! For a moment Spider-Ock is stunned, wondering where he heard the voice from. Cardiac ceases the moment and tries to attack, but mostly gets thrown around the room. Somewhere during the fight, Cardiac finds what he was looking for. Spider-Ock confiscates it however and is pissed when he realizes that Cardiac was trying to steal Dr Otto Octavious' Neurolitic Scanner.

Spider-Ock is about to kill Cardiac when our friendly neighborhood Spider-Man in the head somehow gains control of his physical hand and lets Cardiac go. Cardiac takes the opportunity to flee with the package, but not before having a Spider tracer thrown at him. 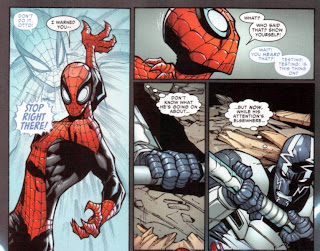 Back at the lab, Peter Ock is busy preparing something but stops when his Avengers card starts flashing. Thinking the world is in danger, he rushes to the Avengers, believing that if they need his assistance, it must be serious ( dumbass) Capt America insists Spider-Man go through a full battery test to prove he is in fact Spider-Man. Spider-Man attacks Capt, resulting in the rest of the Avengers, ready to take him down. 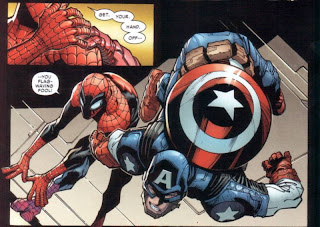 Meanwhile, our good ghost Spider-Man watches in amusement as his own body is about to be shredded.

This was not too bad an issue. I'm probably as excited as ghost Peter Parker to see what becomes of Spider-Ock! By now the Avengers must surely know that this is not Spider-Man! Peter Parker has always been a big fan of Captain America, and would never pull a stunt like that!

Honestly, I'm a little disappointed the Green Goblin hasn't turn up yet. We saw a little of him a few issues back, but nothing since. I'm sure all things will come in good time. I'm not sure how big this Cardiac story is going to get. In my opinion, I think it's just a minor plot to magnify Spider-Ock's feelings about not getting rightful acknowledgement for his past great inventions.

Also, as a Peter Parker fan, I'm damn glad he is finally getting a little control of his physical body back! The explanation is really weak as to how he is even still alive, but I'm glad he is. Can't wait to see what happens.