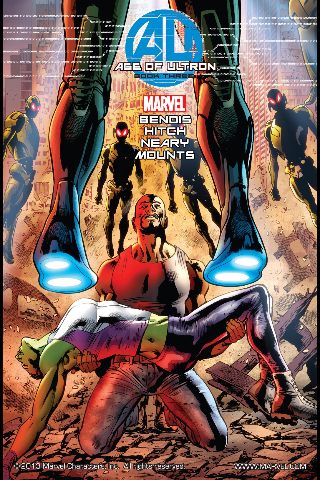 Hello everybody & welcome to my review of Age of Ultron #3. 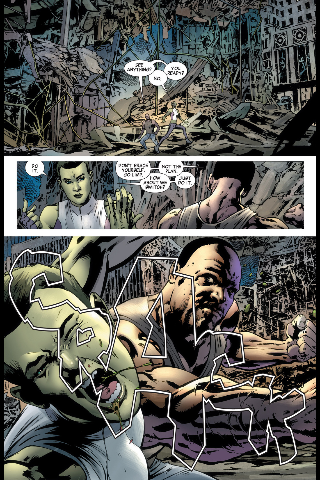 In New York, Luke Cage & She-Hulk are on the surface, going over a plan, Luke tells She-Hulk to go limp right before he punches her in the face, knocking her out. He then lifts her up over his shoulder and begins carrying her somewhere. We flash back an hour ago to the heroes hideout, where Spider-Man is attempting to rally everyone to fight back.
As the conversation goes on, we learn that Cyclops, Thor, the Hulk, the Thing, Jessica Jones & Danni Cage are among the dead. Captain America says that was before they learned that Ultron was accepting heroes as a trade. When Storm questions why Ultron would do that, Iron Man explains that Ultron was created to have human needs and desires. Ideas like revenge, torture and hate are programmed into him. Hawkeye suddenly interjects to condemn Hank Pym for inventing Ultron in the first place. Iron Man attempts to defend Hank, which infuriates Hawkeye given the heroes reaction to his rescuing Spider-Man in #1.

Cap breaks up the arguing to explain his plan. They sell one of the group to Ultron, someone durable enough to grab intel and do some damage. Cage & She-Hulk both offer to go, and after some back and forth, it is decided that She-Hulk should go and that Luke should be the one to sell her, which sets up the opening scene. The other heroes will travel to the Savage Land (if it even still exists), since their base won't be safe after the plan is executed. Back in the present, Cage is surrounded by Ultron Sentinels. He states that he has a Hulk, and that he wants to trade.


﻿
Meanwhile, in Chicago, Red Hulk, Black Panther & Taskmaster are watching for U-Sentinals. Taskmaster spots one 1.2 miles away and notifies Red Hulk, who then immediately jumps to and attacks the U-Sentinel, easily ripping off it's head, which seems to be what they were after. However, this gets the attention of more drones, which quickly swarm around the three. Rulk tosses the head to Black Panther and tells them both to run while he holds off the Ultrons. As Rulk stands his ground, an explosion knocks the other two forward and down some stairs. After landing roughly, Taskmaster gets to his feet and urges Panther to get up. Unfortunately, Panther landed awkwardly and fatally broke his neck. After a clear moment of sorrow, Taskmaster picks up the U-Sentinel head and carries on.
Back in New York, Luke Cage and the unconscious She-Hulk are transported into Ultron's city by several drones. As he is lead to their figure of authority, he discovers that it isn't Ultron, but in fact the Vision (well the top half anyway), who asks Luke what he offers... 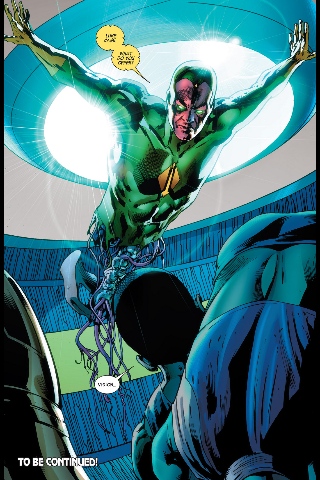 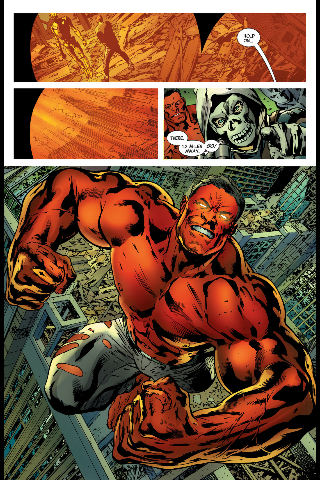 Once again a very strong issue. Bendis is starting to throw some info about Ultron while still keeping the robot physically off panel. He doesn't falter from providing a killer atmosphere for this future world, literally. The death of Black Panther amps up the tension even more and reminds us how much danger our heroes are in, the fact that it's so sudden makes it all the more effective. I enjoyed seeing the heroes becoming more proactive and take the fight directly to Ultron. It was also good to see Taskmaster and Red Hulk in this issue, Taskmaster gets a funny line here that I'd rather not spoil.

The final twist with the Vision surprised me, and I'm now intrigued to see how he's now in this position. I'm glad he's playing a crucial role in this and hopefully Bendis will provide us a look at the relationship between Ultron and his creation. I'm kind of confused as to where Hank Pym is in all of this, but I'm glad that he's referred to here and that his creating Ultron is brought up by Hawkeye.

Bryan Hitch continues to impress with his art. When the characters need to show emotion, he captures that very well. Hitch also provides great action. It's helped by the fact that he draws Rulk so well. Three issues in already, and the story continues to be compelling. Bendis is continuing to weave an epic struggle between the heroes and Ultron, and with the Vision now involved and Pym hopefully on the horizon, this series will go from strength to strength... 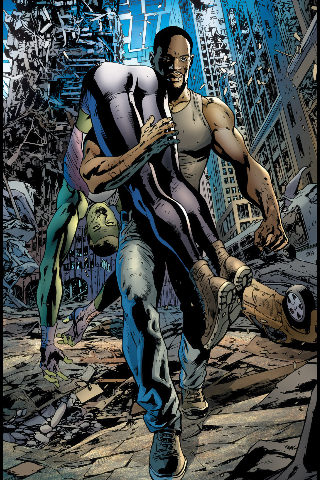