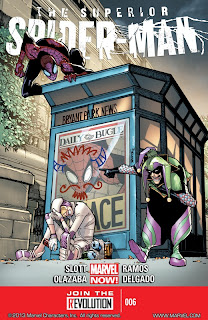 In Superior Spider-Man 6, we see the return of Spider-Man's harmless 'enemy,' - Screwball.

The Story
This issue begins with Mayor Jameson making an important speech about a crackdown on villains. In the middle of his speech, Screwball and Jester appear, playing a prank on Mayor Jameson, catching him with his pants down, live online. Everyone in town is watching and laughing, including Peter-Octopus. Not long later, Peter receives a message from Jameson. He is summoned as Spider-Man to his office and is asked to take out Screwball and Jester. Although he refuses at first, Spider-Man eventually agrees to help the Mayor.

Meanwhile, The Avengers are having a serious discussion about Spider-Man and his new violent behavior. Wolverine sticks up for Spider-Man stating that everyone on in the Avengers has had blood on their hands, so why should Spider-Man be treated differently. 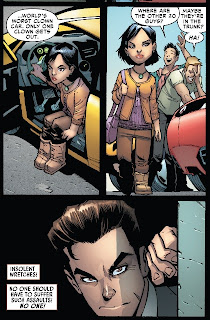 Coming back to Spider-Man he makes his way to the Empire State University for his appointment with Anna Maria Marconi, the short lady who offers tuition for Peter's Doctorate from Superior Spider-Man 5. Peter-Octopus watches Anna approach from a distance, also observing how she is made fun of by some others for her height.

Meanwhile, inside Doc Ock's head, the real Spider-Man is being tossed around Ock's memories, seeing Octavious being bullied as a kid.

Peter Octopus offers to teach the bullies a lesson, but Anna tells him that she is above them. Anna then tells Peter how she wanted him to meet and apologize to his tutor lecturer - Doctor Lamaze, who was Octavious' classmate back in the day. Peter is not really enjoying his 'coffee' time with the Doctor and leaves as soon as he gets notified of Screwball and Jester's whereabouts.

Anna later tries to call Peter but is shocked when she finds her bullies' car in a wreck and the bullies themselves stuck in the boot. 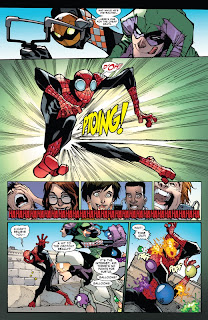 Spider-Man tries to be as professional as possible with the two goons. However, things soon get out of hand when Screwball and Jester manage to humiliate him on camera. Spider-Man then shows them no mercy and beats them silly leaving two bloodied bodies lying on the ground.

Elsewhere, Wolverine, along with the rest of the world is watching. Wolverine tells Cap that Spider-Man has to be brought in.

If there is anything this issue is telling us it is that Peter-Octopus hates bullies from the bottom of his heart.
Our Peter Parker also had similar bullying from the likes of guys like Flash Thompson, but somehow, Octavious' goes a whole lot deeper.

By now, everyone who knew Peter Parker should know that something is not right with this 'Peter.' The Avengers are noticing the change and are determined to do something about it. Screwball noticed that Spider-Man didn't have any quick comebacks. His colleagues at Horizon Labs definitely notice a change. Even Mary Jane, who was watching the feed could finally tell something was up.

As far as Anna Maria's bullies are concerned. She will soon find out who did this to them, creating more doubt about Spider-Man.
Read More
Newer Posts Older Posts Home