"The Spider-Man made Bentley urinate himself." 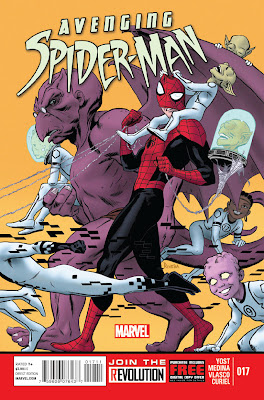 Some time in the future, the Time Variance Authority (TVA) detects that an incident caused by the Future Foundation (FF) will lead to the destruction of the present timeline, unless the FF are eliminated!

Afterwards, Spider-Man reveals that he has an ulterior motive for agreeing to babysit, and makes his way to the Baxter Building vault to retrieve something.  When he opens the vault however, he is attacked by the time travelling bounty hunter known as Death's Head.  At the same time, several TVA agents teleport into the Baxter Building and begin attacking the children.  Alex Power asks the leader of the TVA, Oborus, what the FF have been charged with, but before he can answer, Oborus realizes that Spider-Man is currently Otto Octavius, prompting Spidey to web his mouth shut and continue the fighting.

After punching off the head of one Death's Head robot and kicking another one (called from another timeline) out the window, Spider-Man is able to get Oborus to explain why the TVA is attacking.  Oborus reveals that the FF will create a device that will rip a hole in space time that will destroy the timeline.  Remembering the plans from Bentely's room, Spider-Man is eventually able to get Bentely to agree not to create the device by whispering a threat so horrible, Vil and Wu would later claim that Bentely urinated himself.  This averts the catastrophe and the TVA leaves, unknowingly leaving a Death's Head robot behind.  When the Fantastic Four return to the Baxter Building, Spider-Man tells them that he's out of the babysitting business.

Back at the TVA, Oborus reveals that in the future Spider-Man will do something that will destroy many lives and expresses frustration that he can't do anything about it since it doesn't involve time.  Meanwhile, at one of Doctor Octopus' old hideouts, we discover that Spider-Man has taken Sandman (contained in a special glass jar) out of the Baxter Building vault...

Chris Yost has succeeded in crafting another fun done-in-one story while also planting the seeds for a larger story to come.  The best part of this series is getting Doc Ock's perspective on his new superhero colleagues, and this issue is no different.  Spider-Man's biting commentary of the FF and the FF's reactions to this new, more intense Spider-Man made for a fun read.  Of course, the premise of a supervillain trying to babysit a bunch of super powered kids is a recipe for hilarity, and Yost plays it up well, perfectly capturing each character's voice and preserving the lighthearted tone of Matt Fraction and Mike Allred's FF.  Yost also uses the situation to showcase this new Spider-Man's unique brand of heroism, as in the end the day was saved because it was Doc Ock under the mask and not Peter Parker.  Paco Medina once again handles art duties, and does a great job with both action and character interaction.  His clean, straightforward style is a perfect fit for this series.

Yost has turned Avenging Spider-Man from a fun diversion into an essential read, as he offers tantalizing hints at what the future holds for this current incarnation of Spider-Man both in this title and in Dan Slott's Superior Spider-Man. 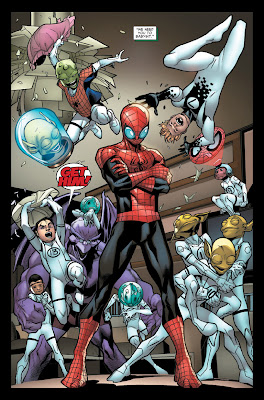