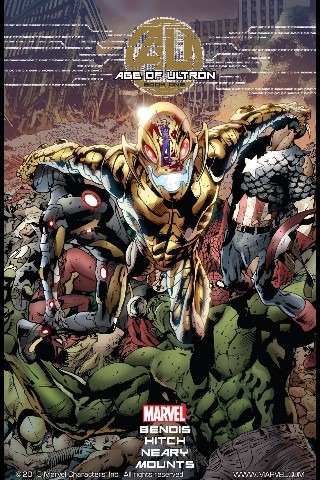 Hello everybody and welcome to my first crossover event review, Age of Ultron #1. 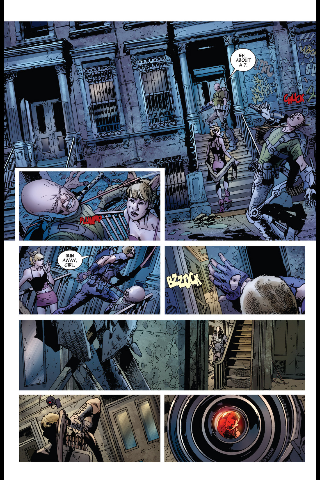 We open to a post-apocalyptic New York City. In the deserted and ransacked streets, Hawkeye watches as a young girl arrives at one of the few occupied houses. Someone from inside asks the girl what she's looking for. The girl says she was invited. The guy inside calls to another man, saying that they have a "honey delivery". Hawkeye kills the two men as they step outside, then tells the girl to run as he makes his way into the house. He comes across two other men harassing another older girl for sex, despite her attempts at refusal, and kills them, causing one man to shoot his gun into the next room, injuring one guy and alerting the rest of the household.

Hawkeye tells the girl to leave. When she refuses and grabs one of the men's guns, he shoots her in the arm, saying he warned her and telling her again to leave, which this time she does. Hawkeye accesses the nearby surveillance system of the house, where he spots the person he's looking for, strapped to a chair, clearly having been tortured. He then takes cover as the thugs mobilise. Hammerhead & The Owl are revealed to be among them. The pair talk about selling whoever is attacking them to "the big guy" if it turns out to be an Avenger, Hammerhead insisting that an Avenger buy lots of "free passes". They approach Hawkeyes location, but he kills one with an arrow, and hurls a grenade at the rest. 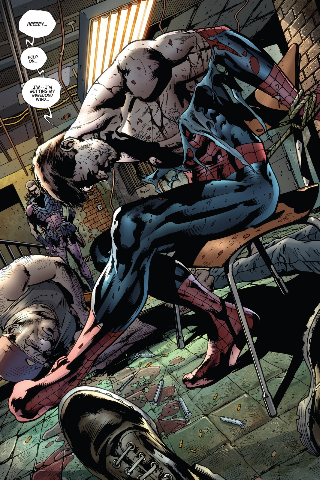 He makes his way to the basement, killing the guards there and greeting his target, who is revealed as Spider-Man (and from the looks of things, it's Peter Parker :D). Hawkeye unties him just before the two are fired upon by The Owl & Hammerhead. Hawkeye engages in a shoot-out with them whilst Spider-Man just takes cover. Suddenly, the building begins to vibrate. Several Ultron drones outside order that the humans evacuate the premises immediately. The Owl runs outside, claiming that they had an understanding, that Hammerhead paid them off, but the drones ignore him. Spider-Man & Hawkeye flee, Hawkeye managing to take down one of the drones with an explosive arrow before they blow up the building, killing Hammerhead & the Owl.

Spider-Man asks Hawkeye if there are others, to which Hawkeye responds "not enough". They make their way to Central Park, entering the wreckage of the S.H.I.E.L.D Helicarrier Hawkeye warns Spider-Man that what comes next won't be pleasant, shortly before they are attacked by Luke Cage & She-Hulk. Luke tells Hawkeye that they told him not to come back if he, Hawkeye replies that he told the that he was bringing Spidey back. Iron Man appears, cursing Hawkeye for making him use tech out in the open. He scans them both with a kind of mouthpiece device, to see if they are being controlled by Ultron. They both show up as clear. When Luke & She Hulk voice disapproval, Emma Frost reads their minds, confiring they are clear. Hawkeye calls shame on the heroes for giving up. Iron Man says they have no plan, to which Hawkeye responds "and whose fault is that?" We then see an emotionally broken Captain America... 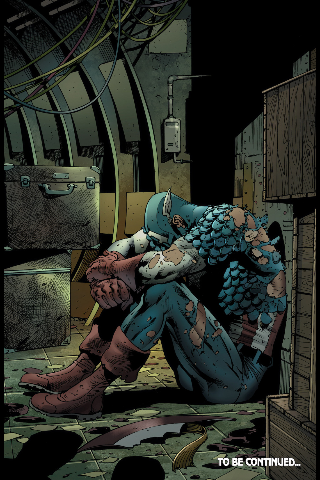 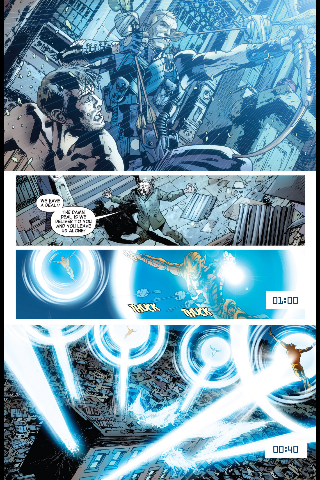 Beginning this story In meidas res was a great idea. The dystopian world ruled by Ultron, while we don't get the full scope of it, is a nasty looking place. Bendis makes a smart choice by focusing on giving us the look and feel of the atmosphere of this broken New York and it's superheroes rather than cramming tons of exposition down our throats.
Hawkeye is in full badass mode this issue. Who'd have thought that dual-wielding crossbows would look so cool. It's a thrill to see Peter Parker in this event rather than Otto Octavius, which makes this event all the more enjoyable to read for me personally. Despite the prominence of these two jokesters, don't expect a lot of gags here, though there are one or two occasionally. This is a darker, more serious Marvel U now, and the characters reflect that wonderfully with their actions and expressions.

Bryan Hitch draws some dynamic splash pages and the action is fast and brutal. The vibration effect is okay at first, but it becomes a little too disorientating after a while, and it makes the artwork look a little muddled. This is a promising start to Age of Ultron. I'm very intriuged as to how Ultron was able to do this, and how the heroes plan to defeat him. Also, how the hell did Ultron manage to kill Thor? I guess we'll find out soon enough... 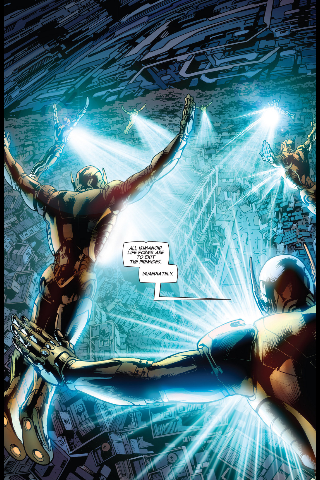