One month after the death of Peter Parker, we see Otto Spider-Man, watching the night with the help of his new spider-bots. He also seems to be faring quite well with Peter's personal life, gaining the trust of Aunt May. Otto-Parker however is unsatisfied that Aunt May can no longer walk properly due to her accident.

He sets to invent a means to solve this problem. Once he finishes, he summons Max Modell, who is not at all impressed by Peter negligence of protocol, behaving like he is the boss instead of Max. Otto-Parker says that his invention is now ready for human trials, starting with hi Aunt May. Just then, Uatu makes a passing comment about Peter being Dr Frankenstein  At this, our Otto brained Peter Parker insist that he is Doctor Peter Parker. Max corrects him, telling him that he is plain Mister Peter Parker. 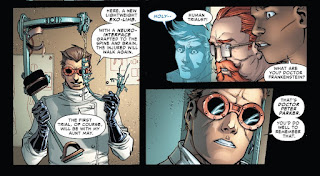 Octavius is furious by this and begins accessing Peter's memories, only to find that Peter is indeed not a doctor. He then storms off to 'rectify' the problem, leaving Max quite unimpressed.

In the meantime, an old villain, has broken loose and is mindlessly killing people as he pleases.

Coming back to Otto-Parker, Peter has enrolled himself back to school to obtain his doctorate. It's not long before Spider-Man is summoned at the break out scene of this mass murderer- Massacre. Doing things Ock's way, Spider-Man requests the help of Uatu to upgrade his Spider-bots to better find Massacre.

Finally, in a totally unrelated scene, that remains to be my favorite of all, we have two kid vultures flying around, trying to hide from Spider-Man and his spider-bots. The kids spot a spider-bot spying on them and begin to freak out. Just then however, a foot crushes the spider-bot. He tells the kids to spread the word that someone who can crush Spider-Man is back in town - the Green Goblin! 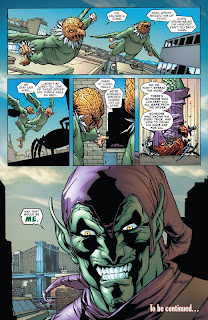 Firstly, I must say that Doc Ock is definitely a smarter Spider-Man. Only he can think up the invention of spider-bots to find criminals. He even gets the help of Uatu to upgrade his bots. Here we see Ock going through a lot of trouble to find Massacre. It's all very logical, except that, our Friendly neighborhood Spider-Man would normally just listen to the police intercom and swing around to where Massacre was last sighted and look around... and find him without it ever being an issue. No? My point here is that, with this new Spider-Man, things are suddenly getting a little more logical, but not necessarily entertaining. I mean, I could really skip the part as to how Spider-Man finds the bad guy..