From the cover of this issue, it looks as if this new Superior Spider-Man is following after our Dark Knight. Allow me to reassure you, that you comic fans have nothing to worry about as the new Spider-Man is not interested in having a Spider-Signal beaming into the sky.

It all starts with Mayor Jameson, clearly watching too many Batman movies, standing atop a building, boasting how he will now be running the city with Spider-Man arriving at his command. Spider-Man does arrive, but only  to blow up Jameson's Spider-signal.

Spider-Man toys around with Jameson a little, by inflating his ego, right after blowing up his Spider-Signal.

Anyhow, Spider-Man is soon informed about the vulture's thugs creating problems around the city. Spider-Man states that he already knows about it. Carlie is then assigned to partner with Spidey to solve the case. Spidey then requests to have full access to the police lab.

In the police lab, Spider-Man makes some adjustments to his lens. Carlie immediately realizes that they did not need to be in the police lab, but that Spider-Man was simply pushing Jameson around. Meanwhile, ghost Peter is still hanging around, as he has been for the past two weeks. Once Spidey finishes with his lens, he then swings off, leaving Carlie behind, telling her he does not need her.

With his improved lens, he is now somehow able to easily locate the Vulture. While swinging to his destination, Ock Spidey recalls his first encounter with the Vulture. Suddenly, ghost Peter finds himself transported to the past, still a ghost, but able to see first hand everything that took place in Ock's past with the Vulture.

Back in real life, the magnetic trail that Spider-Man was following begins to get stronger. He stops recalling his past for a minute. Still in Ock's thoughts, ghost Peter, now in a Spider-Man costume realizes that everything has paused. He decides to continue snooping around however, just to see if he can find anything useful in Ock's past.

Back at the Vulture's lair, the little vultures return with everything the Vulture requested. He then rewards them with game tokens. Not long later, Spider-Man, who is really Doc Ock, comes into the picture. Recalling his past friendship with the Vulture, he offers the Vulture fifty million dollars to stop his evil ways once and for all.

The Vulture obviously does not believe him and sends his goons to attack. Spider-Man easily knocks one out, only to find that it is actually a child! 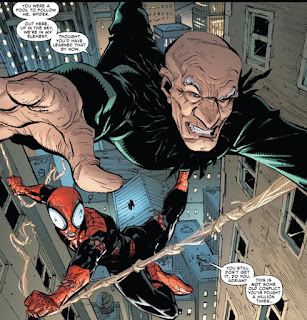 At this, Ghost Spider-Man, still in Ock's memories, is suddenly transported to another memory, where Ock's father was beating him. Back in real life, Spider-Man/ Ock is furious that the Vulture is using children. He then proceeds to beat every last sh*t out of the Vulture and succeeds. The Vulture is left in terrible condition, causing Carlie to question Spider-Man. By the end of the issue, she is clearly on to Spider-Man!

To me, this was a rather average issue. The Vulture gets taken out in the same issue he returns in. We discover a little more about Dr Octopus's past, which I honestly could not care about. Jameson is being toyed with by the new Spider-Man in this issue, even though he doesn't see it that way.

In this issue, we see that Ghost Peter is voicing some concern for Carlie's safety, seeing that it looks like she knows Spider-Man is no longer Peter Parker.