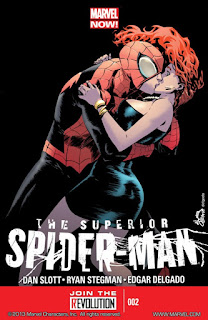 Apologies for the extremely late review. This is the second issue of Superior Spider-Man, featuring Dr. octopus, not only as Spider-Man, but as Peter Parker as well! It also features a little of our real Peter Parker , just not in the flesh.

This issue starts with Mayor Jameson, finally coming to terms with Spider-Man, congratulating him and apologizing for all his years of scrutinizing. Ghost Peter, whom no one can see can't believe his eyes!

Meanwhile, MJ and Carlie are having a little chat at a coffee shop. Carlie sort of wants to tell MJ about her encounter with Dr. Octopus and how he told her he was actually Peter, but decides to shut her mouth when MJ blurts out that she and Peter might be getting back together.

For the bulk of this issue, "Peter Parker aka Octavious, is trying his best to score with Mary Jane. His lunch date is interrupted by the needed presence of Spider-Man. Dr Ock as Peter complains about how the real Peter had to deal with this all the time and decides to come up with an invention to solve the problem.

At horizon labs, Ock, get to work immediately. We also learn that he has invented a 'robot helper' and no longer needs the help of the other inventors/ colleagues at Horizon. They have obviously noticed how Peter has changed.

On his next date, Peter Octopus tells MJ that all his daily patrol problems are taken care of. He has created a Spider bot invention that acts as a camera, where he can monitor everything going on in the city, giving him more time to spend with MJ.

After about three other dates, Peter Octopus grows slightly impatient, wondering whats taking him so long to score with Mary Jane, seeing that the only action he seems to be getting is a little peck on the cheek. Ock eventually figures out that the missing element is danger. He decides to web swing MJ back to her apartment.   Ghost Peter is beggin MJ not to fall for it. 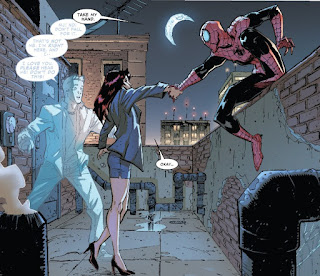 Spider-Ock almost succeeds except that Carlie was staying over at Mary Jane's place that night, thus denying him entry into the apartment. Anyway, Spidey leaves disappointed again. On his way back however, he realizes that he can simply relive Peter's memories with Mary Jane, and does not need to physically be with her. (gross for a comic)

The next morning, Ock wakes up really happy, even making some moves on Sajani from Horizon, which infuriates the ghost Peter. While in the lab, one of the spiderbots start going off. Apparently Mary Jane is in danger. Having, Peter's memories and feelings for her now, he rushes there immediately, managing to save her from a free fall ( she was dropped in mid air by one of the vultures henchmen.) 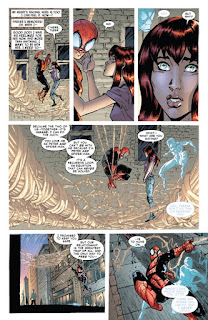 Just as he is about to score big, Spider-ock decides against having any relationship with MJ whatsoever, telling her that it is impossible for them to have a relationship as it would only put her in danger. He then leaves.

Carlie grows increasingly suspicious as she hears the story of what happened from MJ later that night. Carlie decides, she is going to get down to the bottom of this and find out what is really going on.

For starters, as a big Mary Jane/ Peter Parker fan, I am really glad Ock was not able to score with MJ. I'm also glad we got the whole issue/ worry of this fake Peter having any relationship with her out of the way in one issue. Honestly, it solves half the problem with Superior Spider-Man immediately.

I enjoyed having Ghost Peter around in this issue. Having him around gives the reader a sense of hope for his return.

Also, very quickly, we already see how this Spider-Man is indeed more superior. His spiderbot invention, although, as MJ pointed out, is very much unlike him, is actually genius! Spider-Man has suddenly become like Superman, knowing exactly when MJ is in trouble, and saving her just as she is falling in mid air! ( Sound familiar)

Peter should definitely adopt these spiderbots if and when he finally returns. I'm also glad we have Carlie on the case, to solve the mystery of Ock's death.

While Peter's strange behavior can be explained to Mary Jane and Carlie when he finally returns, explaining it to anyone else will be a slight problem. Supposing he does return, and the world finds out that Ock had switched bodies with Spider-Man, it would still not explain Peter Parker's strange behavior.

Everything Ock, as Peter does, particularly with his friends at Horizon Labs, is going to have a permanent effect, with no truthful explanation. Obviously the only out of the situation would be to tell everyone that he is Spider-Man, but we all know that will not happen...