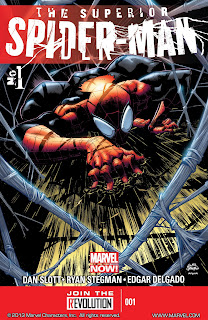 Here we are at the first issue of the Superior Spider-Man - featuring Doctor Octopus as Spider-Man!

It all starts with Peter ( Ock) visiting Dr Octopus's grave, embracing his new persona. We next see him going off to stop a new bunch of criminals who are taking over the name Sinister Six. Being the leader of the original Sinister Six, Peter Octopus, as I shall call him from now on, is not at all impressed.

The new Spider-Man easily takes out most of the Sinister Six except for the 'Speed Demon.' Seeing that this Speed Demon is moving faster than his Spider-Sense, Spidey decides to flee the scene and leave the Sinister Six to continue what they were doing. As he is leaving however, a dangerous boomerang is thrown at him. Spidey easily dodges it, but instinctively turns back to save the civilian that the boomerang is headed for.

Taking the impact of the boomerang for the civilian, Spider-Man is caught off guard for a moment and is soon attacked by another member of the Sinister Six. At this point Spider-Man unleashes his Spider claws and scratches his enemy. His enemy is slightly dumbfounded but soon decides to flee the scene. 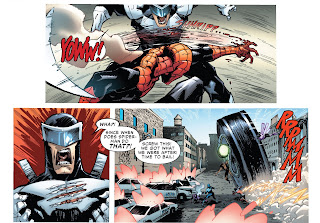 Spider-Man requests that he be able to keep some remains of the fight. Apparently there was something of value that was left behind. We next see this 'robotic' looking thing appearing at Horizon. Peter uses it to gain more knowledge and improve his inventions. 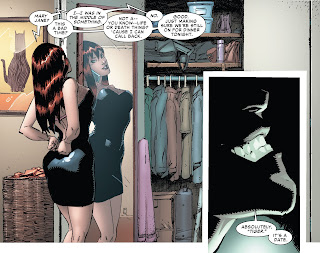 We later see MJ calling Peter to confirm their date. Peter Octopus enjoys a dinner date with MJ but is mostly just staring at her body for most of the time. During dinner, Peter explains how he inserted little spidey tracers when he scratched one of the sinister six earlier that day. He then explains to MJ that he is listening in on their conversations and tactics and will go after them later.

We later see Spider-Man stop the Sinister Six again, after listening in on all their plans, he has no problem countering any of their attacks, including Speed Demons.

At the end of it all, we see Spidey so pissed at what has become of the Sinister Six that he is about to murder the leader. Just as he is about to land the fatal blow however, he is stopped... by Peter Parker's spirit. ( What?)

Spidey is slightly confused as to why he hesitated, but we see Peter's spirit in the final scene, swearing he will find a way back. 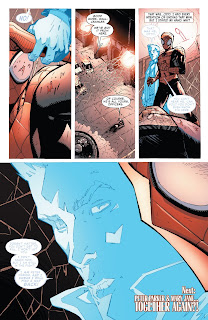 Thoughts
For starters, I'll have to say that I am very grateful to see Peter Parker is somehow still in the picture, even though he just died. So I read in some other reviews that the depiction of Peter could be done in a better way rather than a ghostly figure that no one can see. Personally, I thought that there was no problem whatsoever with the way Peter's spirit was depicted.

As far as our new Spider-Man is concerned. This is exactly how I was hoping Superior Spider-Man would be written. My main concern at the end of Amazing Spider-Man 700 was that Dr Ock was going to suddenly start acting exactly like the original Peter Parker, making it impossible for anyone to ever detect something fishy.

Fortunately, pretty much all of Dr Octopus is still in Peter's body, thus giving me hope that this new status quo will not stick.

Mary Jane- so far, is trying to think and make the best of Peter. While logically, she, who knows Peter best should have suspected something by now, we are forgetting that she has fallen back in love... and if there's anything we all know about love, its that love is blind! Poor girl.

Alternatively, she just might be able to open her eyes in the next few issues. Till then!