Venom and Valkyrie take on the U-Foes! 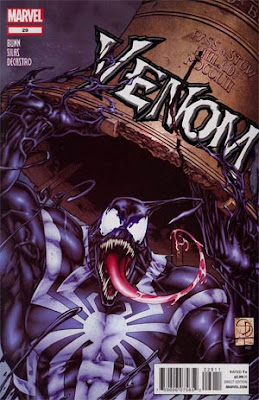 The Story - "Drowning in a Nightmare"

Venom awakens in the wreckage of the Maritime Motel, having played dead to get the U-Foes off his back, and vows to take his job as a superhero more seriously.

Meanwhile, the U-Foes prepare to test one of their alien devices on Katy Kiernan.  They reveal to her that they had found a treasure trove of alien technology in an abandoned warehouse and were using some of the equipment to teleport test subjects for the equipment they did not know how to use.  The test doesn't kill Katy but instead gives everyone a glimpse of her memories, which appear to include the Kingpin.

Flash Thompson is able to get a tip from a conspiracy buff at the Mutter Museum as to where to find Katy.  He arrives at the U-Foes' warehouse as Venom and is attacked by them.  Venom is able to call his "girlfriend" Valkyrie in for assistance but the U-Foes are still too much for them, prompting Flash to lose control of the symbiote!

Another issue of Venom and again I find myself bored by the events inside.  Cullen Bunn's story has so far been pretty by-the-numbers.  The U-Foes are your typical mustache twirling bad guys, and Flash loses control of the symbiote, again.  Flash losing control happens so many times that it's ceased to be something that excites you and instead just makes you roll your eyes.  More importantly, the atmosphere of forboding and creepiness that Rick Remender brought to the book is entirely absent.  Venom is a serviceable superhero book, but I think I'm going to take a break from this series for the time being.
Read More
Newer Posts Older Posts Home