Spider-Man saves the President as United We Stand reaches its conclusion! 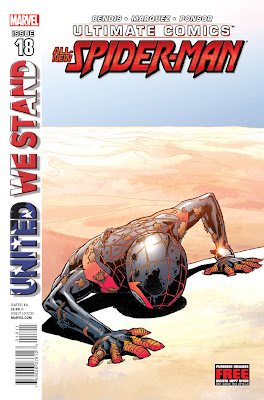 Ganke watches the battle between S.H.I.E.L.D. forces and Hyrda in Wyoming on television.  As he watches, he witnesses Spider-Man save President Captain America's life.

Spider-Man continues to wander aimlessly through rural Wyoming until he stumbles upon a Hyrda Giant Woman who also got lost during the fight.  The Giant Woman is able to knock out Spidey and carry him off.

In their apartment, Miles Morales' mother asks Miles' father what happened to him.  He explains that S.H.I.E.L.D. agents arrested him and that after Hydra agents freed him and a few other people from the back of a S.H.I.E.L.D. truck they asked him to join them.  After witnessing the Hydra agents brutally execute the drivers, Miles' father took the gun off a Hydra agent and shot down all four of them before returning home.  Miles' mother embraces her traumatized husband and tells him that they need to find Miles.

Spider-Man wakes up in Giant Woman's hand and uses his spider sting to break free before taking her down.  He is then found by Spider-Woman and S.H.I.E.L.D.  Back in New York, Spider-Woman gives Miles an alibi for his parents and tells him that when the time is right she will tell him who she is.  Miles then reunites with his parents at Ganke's house.

While the story started to drag in the middle, Brian Michael Bendis was able to end United We Stand on a strong note.  It will be interesting to see how Miles' father's experience with the Hyrda agents shape his views on himself and costumed heroes going forward.  I also like how Bendis is slowly building a friendship between Miles and Spider-Woman (who is actually a female clone of Peter Parker).  David Marquez returned to draw the last chapter of United We Stand, and as usual does a stellar job.

Despite a decent finish, I'm glad the United We Stand event is over and Bendis can get back to focusing exclusively on Miles' story.

Looks like intrepid reporter Katy Kiernan has gotten herself into trouble again.  This looks like a job for Superm...  I mean, Venom! 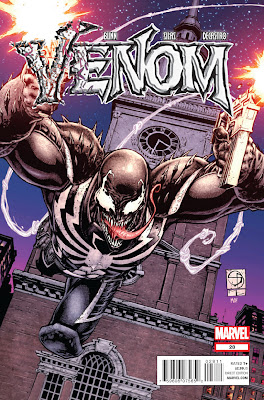 The Story - "The Land where the Killers Dwell"

At the Gallery Mall in Philadelphia people suddenly begin to disappear at random.  Meanwhile, at a gym in New York City, Flash Thompson spars/flirts with Valkyrie until he gets a phone call from Katy Kiernan telling him that something is going down in Philadelphia that he may want to investigate.  Before she can tell him what, Katy stumbles across the U-Foes and is kidnapped.

Venom arrives in Philadelphia and searches Katy's apartment for clues.  The apartment is then attacked by the U-Foes who want all the evidence Katy collected on them destroyed.  After a long battle, the U-Foes are able to fry Venom and complete their mission.  They then head back to their hideout where Katy is being held captive.  The U-Foes prepare to test their equipment on Katy...

Just look at the cover of Venom #28: Venom jumps out at the reader, his sharp teeth and tongue on full display, guns-a-blazing in each hand, with shoulder spikes, knee pads, and pouches around his waist.  Sure it's over-the-top, but I doubt any self respecting 8 year old who sees this cover won't think Venom is the coolest book on the stands.  I'm not knocking it.  More young kids should be reading comics and badassery has always been the key to Venom's popularity.

While this issue is a good choice for young readers, I wasn't enthralled by it.  This title seems to be falling into a rut.  The book used to be about a black ops Spider-Man going on secret missions for the government, but Cullen Bunn has taken it in a more offbeat supernatural/sci fi direction that I find myself enjoying less and less.  The U-Foes aren't very interesting villains and Katy Kiernan is like Lois Lane and Norah Winters, only less memorable.  I'm not sure I'll stick with this title for much longer; it's just not for me.
Read More
Newer Posts Older Posts Home