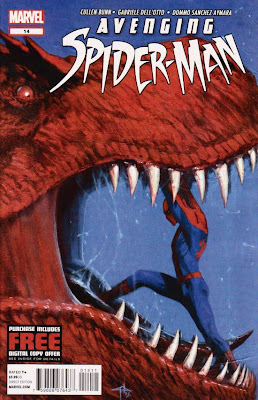 The story opens with Spider-Man fighting fire breathing dinosaurs in the Savage Land.  He is eventually joined by Devil Dinosaur and Moon-Boy.  After the fight, Spidey attempts to explain to Moon-Boy how he got to the Savage Land.  Turns out that Peter Parker arrived as part of a scientific outing with the crew from Horizon Labs.  As soon as they entered the Savage Land, Peter's spider-sense began to tingle so he stepped away from the group to clear his head as soon as they set up camp.  When Peter returned to the camp, he witnessed the Horizon crew get kidnapped by dinosaurs.  Despite not understanding a word Spidey said, Moon-Boy is able to lead him to the cave where his friends are being held! 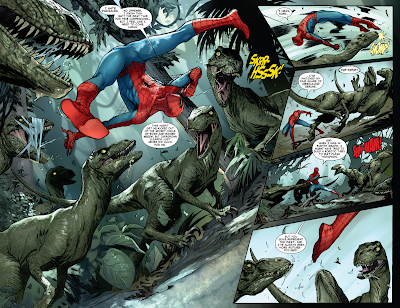 At Moon-Boy's behest, Devil Dinosaur attacks the kidnapper's stronghold, which is being guarded by several augmented dinosaurs.  While Devil keeps the dinosaurs distracted, Spider-Man and Moon-Boy sneak into the cave.  After making sure his friends are okay (without them seeing him) Spider-Man makes his way further into the cave and discovers that the kidnapper is none other than Brainchild!  Brainchild explains that he kidnapped the Horizon scientists so that they could help him bolster his defenses while he experimented on dinosaur eggs.  Brainchild then unveils his newest creation: a giant T-Rex he calls Demon Dinosaur!  Spider-Man and Moon-Boy run out of the cave with Brain Child and Demon following them.  As soon as they make it out, Devil Dinosaur attacks Demon.  During the dinosaur battle, Moon-Boy is able to knock out Brainchild.  Upon seeing this, Demon Dinosaur runs away, his heart not really in the battle.  As Spider-Man changes back into Peter, Moon-Boy releases the Horizon scientists.  As they all board a plane and head home, Moon-Boy and Devil witness the eggs Brainchild was experimenting on hatch. 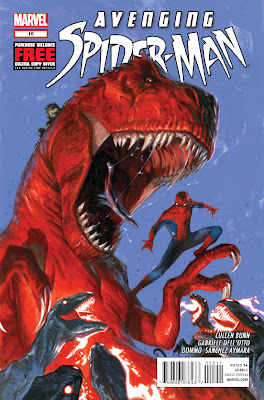 I've always been a fan of the Ditko-esque way Dell'Otto draws Spider-Man, so it was great to see him draw Spidey again.  The interiors of the book don't feature Dell'Otto's painted style as seen on the covers, but these are still two great looking comics.  Meanwhile, Cullen Bunn provides the fun, over-the-top all ages story that Avenging Spider-Man usually excels at telling.  Kids will enjoy the eye popping artwork and action while older readers will chuckle at the wealth of humour the story provides. 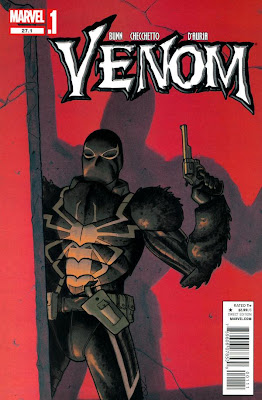 The Story - The Evil Inside Us All...

Working off a tip from Daimon Hellstrom, Venom attacks a devil worshipping cult called the Harkspur Brood in an effort to learn more about the Descent, but the cult yields no information.  Returning to talk to Hellstrom, Venom nearly destroys Hellstrom's cell in a fit of anger and has to be escorted out by security.

Later, Peter Parker joins Flash Thompson as Flash's mother checks herself into the Rose Manor Center for Wellness due to being traumatized after being kidnapped by the Fly and witnessing what her son as Venom did to him.  After they get Flash's mother settled in, Peter tells Flash that an old friend from Midtown High named A.J. Patton has just moved back to New York.  Apparently Flash bullied A.J. back in high school because A.J. is a homosexual, going so far as to break his arm.  Peter tells Flash that A.J. wants to see him.

Flash visits A.J. and his husband in their new apartment in Brooklyn.  During the visit, A.J.'s husband pulls A.J. aside and asks him why he invited Flash over after all the horrible things he did, to which A.J. replies that when he looks at Flash now he just sees a "broken-down wash out."  Unbeknownst to them, Flash can overhear their conversation.

Later that night, Flash, under the influence of the demon inside him, goes out as Venom and interrogates the cultists in the hospital.  He then goes to Rose Manor and scares his mother.  Flash has no memory of this the next day when he goes to meet Peter.  Flash tells Peter that he has decided to leave New York for good...

The highlight of this issue was definitely Mark Checchetto's artwork.  He absolutely nailed this issue, especially the scenes with Venom in action. 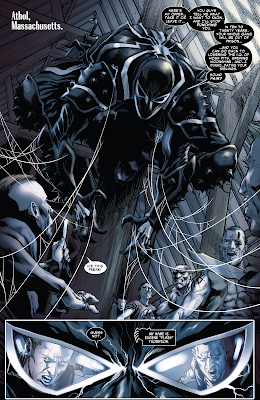 However, I wasn't a fan of the rest of the issue, specifically the way Cullen Bunn portrays Flash Thompson when he was in high school.  I never got the sense when reading the old Lee/Ditko issues that Flash was as bad as he's described in this issue.  Yeah, Flash was mean to Peter, but he was portrayed more as a lovable doofus than a vicious predator.  Reading in this issue how Flash beat A.J. because of his sexual orientation and how A.J. still wakes up at night remembering those beatings really puts Flash's character in a new light, making him more brutal and mentally disturbed then I think was originally intended.

I have mixed feelings on Venom's impending move to Philadelphia.  On the one hand, it's about time the Marvel superheroes started branching off to areas outside of New York, but at the same time it also means that Flash will interact less with the Spider-Man cast.

Bunn is taking Venom in some new directions, but I'm not sure I'm on board....
Read More
Newer Posts Older Posts Home