United We Stand limps on... 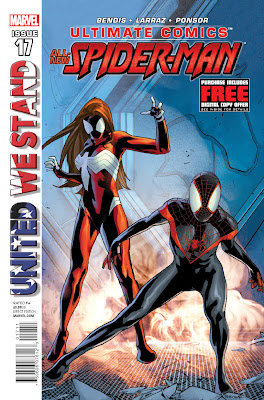 The story opens with Spider-Man stuck in the middle of nowhere when all of a sudden a S.H.I.E.L.D. helicopter flies past him.  Spidey tries to web onto it only to find that he's run out of webbing.  He tells himself he just wants to go home.

Flashback to 4 hours ago: the Ultimates and an army of S.H.I.E.L.D. agents prepare to make an assault against Hydra just outside of Casper, Wyoming.  Hawkeye gives a rousing speech to the troops before ordering Spider-Man and Spider-Woman to stick together, much to her chagrin.

Back in Brooklyn, Miles Morales' father is riding in a S.H.I.E.L.D. truck with two other civilians who were also arrested on the street.  The truck is then attacked by a group of Hydra agents, who capture the drivers and free Miles' father and the other two people.  One of the Hydra agents attempts to recruit Miles' father, who almost accepts but hesitates when he witnesses the brutal execution of one of the drivers.  Later on, S.H.I.E.L.D. lifts the blockade on the street Miles lives on, allowing his mother to come home.  When she gets there she finds Miles' father sitting on the couch cradling a gun.  Worried, she asks him where he got it and where Miles went...

As the battle in Wyoming wages on, Spider-Man and Woman do their best to fight off Hydra and their War Machines.  During the fight, Spidey jumps onto one of the War Machines and takes it out, but in doing so sends it flying out of control with Spider-Man along with it.  Spidey lands somewhere in the middle of rural Wyoming with no way of getting home...

At this point it feels like Ultimate Spider-Man is just twiddling its thumbs until this United We Stand event is over.  This was yet another issue of Spider-Man in the middle of a huge battle with no idea what he's doing, except this time it was Spider-Woman yelling at him instead of Captain America.

The one bright spot of this issue was the interesting arc Brian Michael Bendis is taking Miles' father on.  We know that Miles' father has a bit of a checkered past, and a bias against mutants, but would he really join Hydra?  My guess is no.  Still, I'm looking forward to seeing how this plays out.
Read More
Newer Posts Older Posts Home