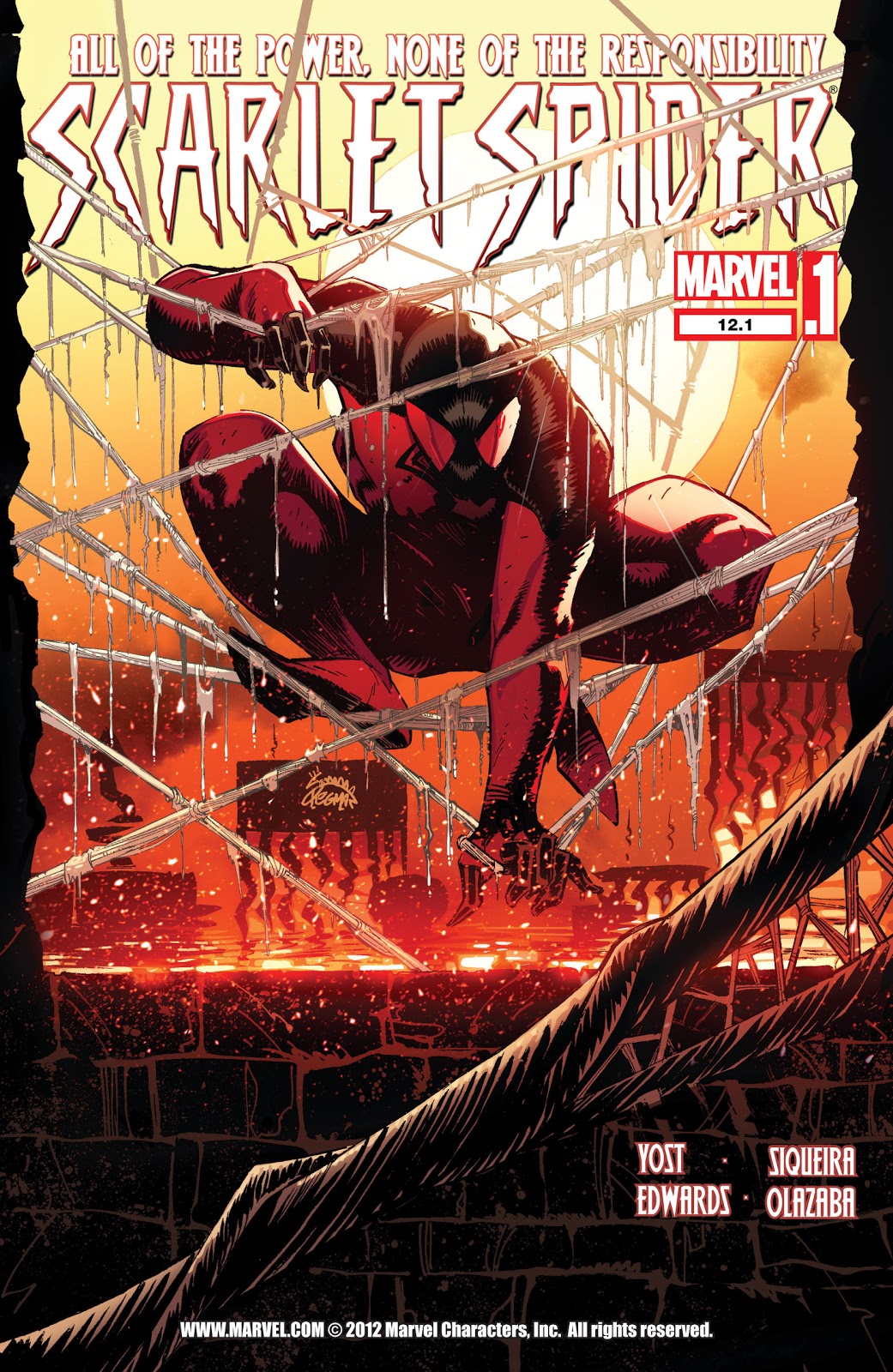 Well, it seems like we weren’t quite done with the Scarlet Spider’s first year just yet.  As part of their whole “Point One” imitative, Marvel has decided to squeeze in one last issue before the new year just in case readers haven’t been following the adventures of Peter Parker’s clone in Houston, Texas (and if not, why?).  Yes, the “point one” issues now seem like a gimmick that has run long past it’s expiration date and original purpose, with one-shot stories that have been hit or miss, and in many cases being nothing more than promotional material for upcoming titles instead of the actual title that appears on the front cover.  Still, might as well see how this particular "point one" plays out.

The issue opens with a young Japanese girl in bed pleading for help as a mysterious, shadowy man enters her room.  The man tells her that she was stupid to run and reminds her that she is his property.  He then tells her that because she has now dishonored herself and her family, her family will now die.  The girl pleads mercy, as the man reaches out his hand, saying she is going to deliver a message.

We then cut to Kaine as the Scarlet Spider, swinging through Houston, with his narration boxes bringing readers up to speed about who he is, what happened, and why he’s here.  His destination is the Japanese Gardens at Herman Park, where Officer Wally Layton is talking to a Detective Herandez.  Herandez tells Wally that he shouldn’t have called the Scarlet Spider because he’s a costumed vigilante, that Houston is not New York, and that the Scarlet Spider will only make things worse.  Wally rebuts by saying the Scarlet Spider is a hero and that, like it or not, they need his help, and mentions how things would’ve been different two years ago with a person named Clutch had the Scarlet Spider been around.

Kaine shows up, and Herandez and Wally take him over to a body propped against the wall and remove the shroud.  It’s the Japanese girl from the first scene, and on her face is a scar in the shape of a hand.  This startled Kaine because he recognizes it as his own “Mark of Kaine,” in which he used his wall-crawling powers to rip the flesh off the face of his victims back when he was a contract killer.  Wally and Herdandez explain that, when a girl like this turns up, it means she was not only brought into the country illegally and forced to work off her fare, but she was very likely a sex slave. 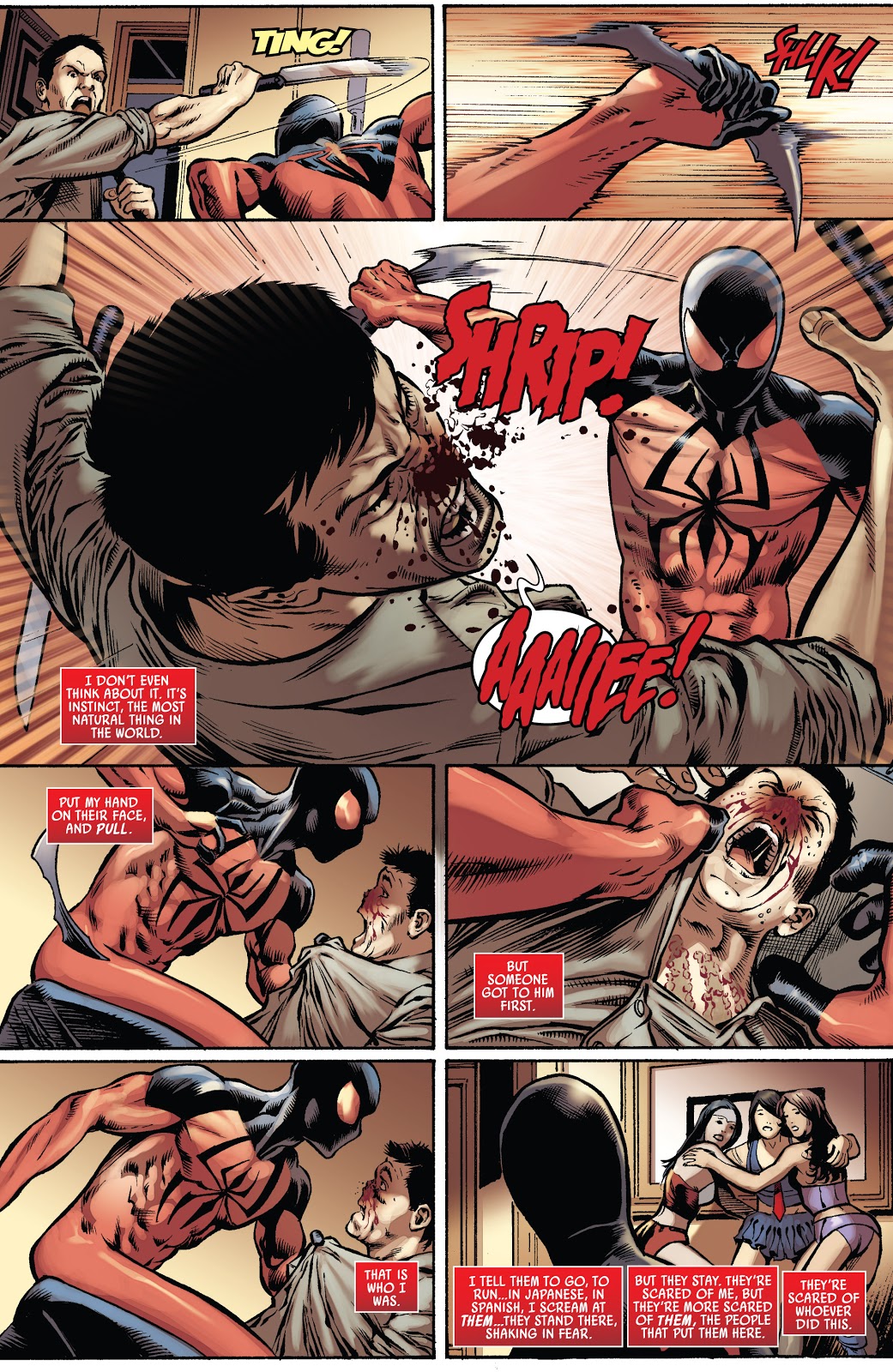 We then cut to the Scarlet Spider that night in the rain, scooping out a massage parlor that is front for prostitution.  We learn from Kaine’s narration that, because of Houston being close to the border and being one of America’s largest ports, the city is a staging ground for human trafficking, and that if one place gets shut down, another rises up to take it’s place.  Kaine then thinks that the dead girl was only fourteen and leaps into action.  Breaking through the window of the massage parlor, Kaine startles a client and the women.  When Kaine demands to know who runs the place, the owner charges Kaine brandishing two large knives.  With his quick reflexes, Kaine dodges the blades and then, with a blade of his own, slices the owner's nose off.  Kaine considers killing the owner with “the Mark of Kaine” but doesn’t as he’s no longer that person.  Plus, he sees from the scars on the owner’s chest that whoever killed the Japanese girl already got to him.  Kaine tells the women to leave, but not only scared of him but more scared of the people who forced them into the sex trade.

Kaine goes back to his rooms at the Four Seasons.  There, he thinks about Annabelle Adams, how beautiful she is, how she’s been nothing but kind to him even after he pulled her into his life, and wonders what she would think of him if she knew who he once was.  Then he goes to Aracely, and thinks that if it hadn’t been for her and his saving her, he wouldn’t have stayed and become what he is now.  He says all he wanted to do was give her a second chance just like he was given, and he wonders how many people have to die in order for that to happen.

We then see Kaine over the next four days waging a one-man war against the criminal underworld as he searches for who runs the slave trade.  Eventually, Kaine gets a name: Mark Tomanaga, aka The Mark.  On the fifth night, Kaine has shown up at the Mark’s hideout, who is calmly waiting for him and eating a prime rib dinner.  The Mark tells Kaine the Japanese girl was not the youngest he’s killed and states that, after seeing what Kaine has done over the past week, that he likes him, and that because they both understand that “power and violence are the only things people respect” they are “like brothers.”  Kaine says the Mark is a slaver and that his business is at an end, but the Mark--taking off his shades to show his left eye is blind and scarred--tells Kaine people are naturally slaves to be used by men of power, and reveals he works for someone much higher.  And from out of the shadows come several ninjas of The Hand.

The ninjas and Kaine fight, and, although they wound him, Kaine manages to defeat them all.  Even more impressed by Kaine, The Mark tells him that in order to stop him, he must kill him.  As the Mark’s hands begin to glow, and reveals his power came from “plunging his hands into the blood of the beast” to show his commitment to the Hand.  He and Kaine fight, and during the fight, Kaine comes to realize that he was just like the Hand.  Kaine then gets knocked to the ground when suddenly, two more people arrive.  One is Bruiser and the other is a man who calls himself the Arranger.

Kaine attempts to attack the Bruiser, only he’s far too strong and Kaine practically breaks his hand in the process When the Mark addresses the Arranger as “master,” the Arranger explains to Kaine that he’s not the actual leader of the Hand but merely the representative of their true leader, the Kingpin.  They're here to deliver a message: the Kingpin is taking over all of the Hand's operations in Houston.  And to show this, Bruiser kills the Mark by snapping his neck.   With the Mark now dead, The Arranger states that they have no quarrel with the Scarlet Spider so long as he stays out of their way.  Kaine tells them there's no deal, as he’s going to do everything he can to bring the Hand down, but the Arranger dismisses this, telling Kaine he’s going to have bigger problems than them.  As they leave, they thank Kaine for helping the Kingpin settle “an old debt” and Bruiser cryptically howls. 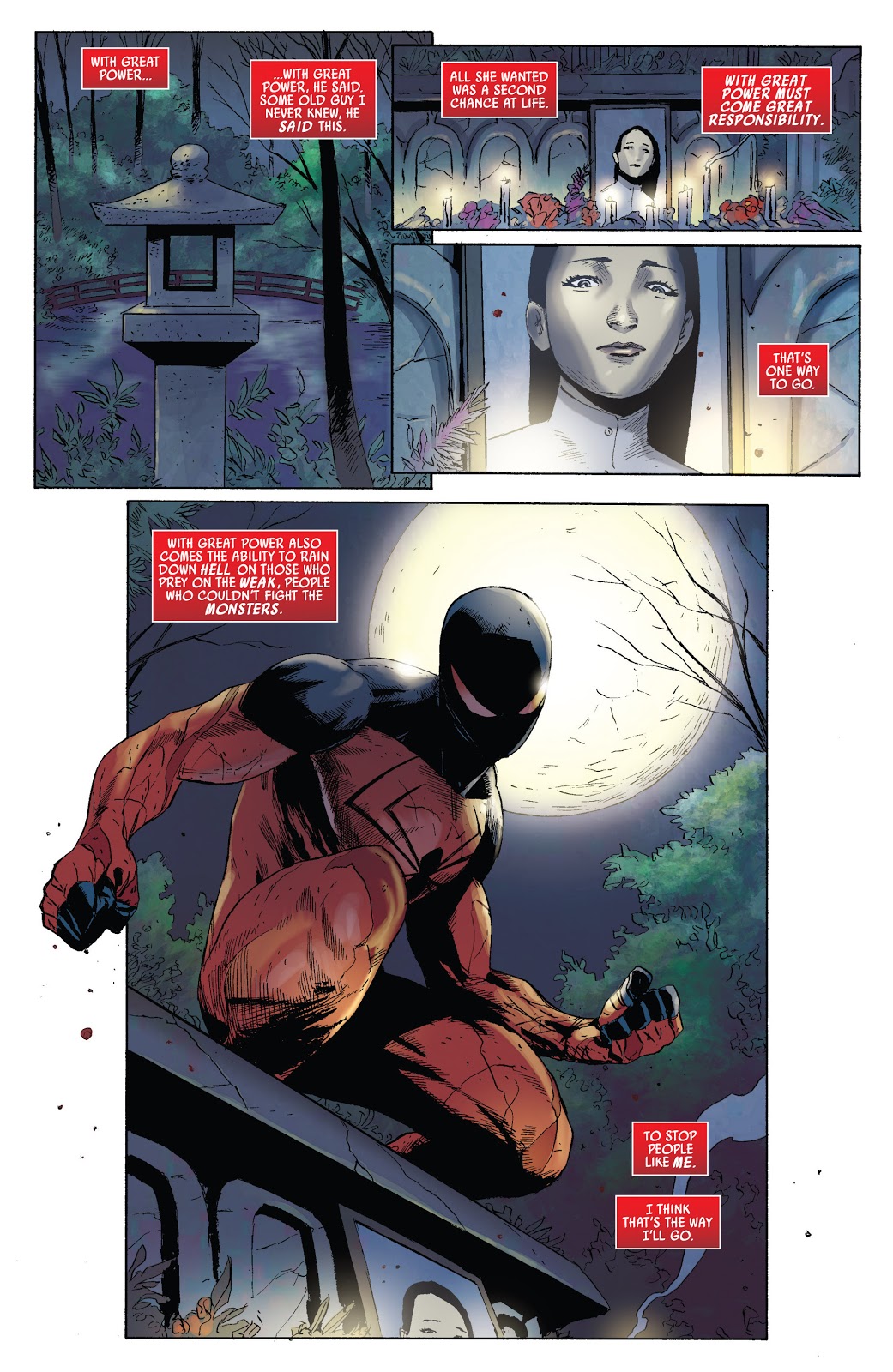 We then see Kaine at back at the Japanese Gardens, where there's now a make shift shrine for the murdered girl.  Kaine recalls Peter’s words about “with great power comes great responsibility” and thinks how that’s one way to be a hero.  The other way, the way he’s chosen, is that “With Great Power also comes the ability to rain down hell on those who prey on the weak.”  He vows to fight and stop the monsters ordinary people cannot fight--monsters like himself.

The issue ends at the Texas/Mexico border, in which we see two wolves approach a group of armed men next to a limo.  The wolves then instantly turn into a well dressed man and woman who tell the two men “Take us to Houston.”

All things considered, this might as well have been Scarlet Spider #13, but I can understand why Marvel felt the need to make this a “Point One” issue. Chris Yost clearly writes this issue as a means of introducing readers to Kaine and his current status quo; it even has the same recap page from issue #12.  And what we come away with is that Kaine, unlike Spider-Man, is not only a very dark and grim character, but he lives in a very dark and grim world indeed.  Also, Yost deserves a lot of respect for being brave enough to tackle such mature and uncomfortable topics such as sex trafficking and modern-day slavery  in a superhero comic and without coming off as heavy-handed.

However, while this story succeeds in differentiating Spider-Man and Kaine, it also risks showing Kaine as yet another clichéd brooding anti-hero that has become all too commonplace in contemporary superhero comics.  As previous issues of Scarlet Spider showed, Kaine as a character works best when his adventures are not reflective of his demeanor and serve to stress how out-of-place he is.  By putting him in dark situations such as this one, Kaine winds up looking like not only just a Spider-Man pastiche, but also a knock-off of characters like Batman, Daredevil, Wolverine, and the Punisher. 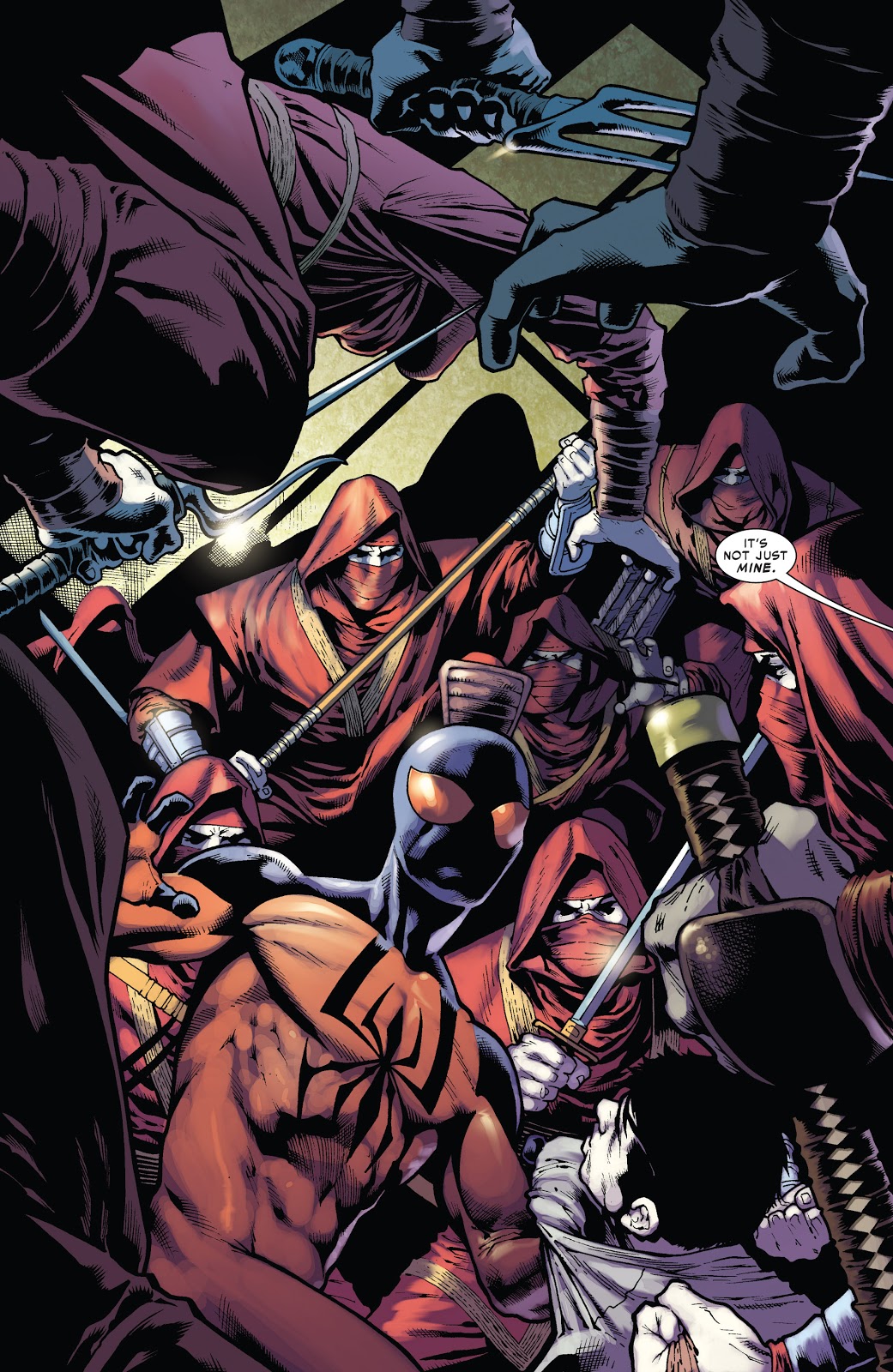 Still, there is plenty to like about this issue.  While it would help readers unfamiliar with Kaine to know bit more about his back story, Yost does a commendable job in comparing and contrasting him with the Mark, who is such a vile piece of filth that you’re glad to see him killed.  Also, this issue serves to suggest that, like it or not, Kaine hasn’t completely escaped the larger Marvel Universe considering how the Hand and the Kingpin have made their presence known.  Better still, Yost finally gives Kaine a true sense of purpose after 12 issues of him attempting to avoid responsibility and run away from his past.  Finally, Paulo Siqueira and Neil Edwards joint collaboration on the art, while sometimes iffy in certain panels, is otherwise terrific.  Not only are their action sequences well choreographed, but they do a great job in showing just how visually scary and intimidating Kaine as the Scarlet Spider would actually be.  I definitely hope they’ll return for future installments as this shows they’re a good fit for this comic.  All in all, a very decent one-shot.