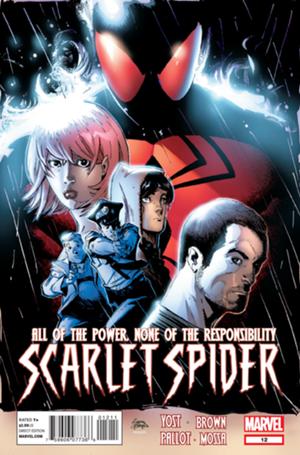 Well, the convoluted and ultimately unsatisfying mess that was "Minimum Carnage" is finally over (okay, I liked parts of it but as as whole, it really went off the rails) and we're now back to business as usual with our favorite angst-ridden, perpetually cursing, tattooed Peter Parker clone.  Best of all, it's a special Christmas issue.  So lets see if a Scrooge like Kaine can be overcome with the spirit of the holidays.

THE STORY
We open with a group of sharply dressed men planning a heist.  Their target?  A collection of diamonds valued at an estimated $17 million dollars.  The location of these diamonds?  The Four Seasons Hotel. 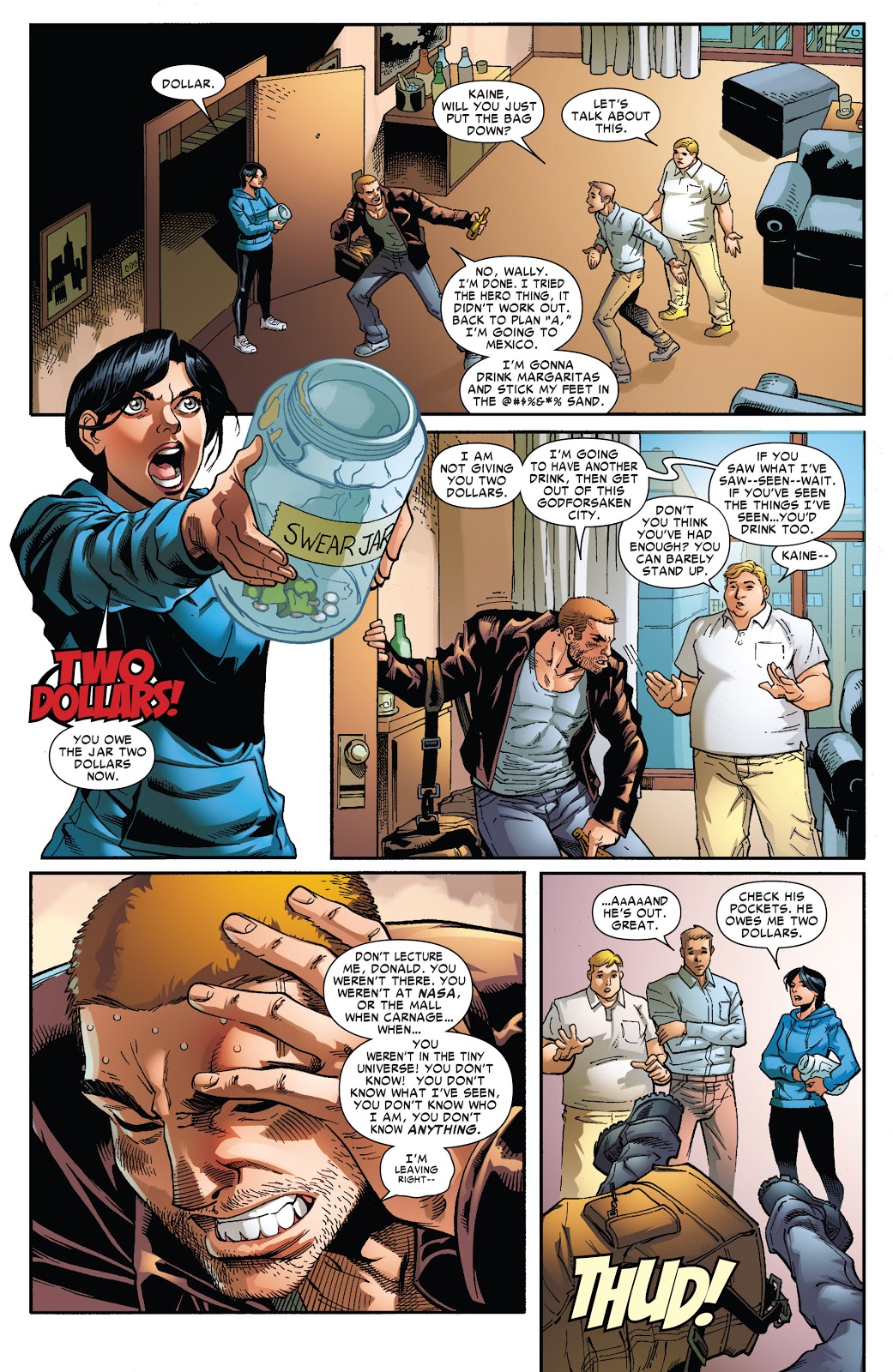 Speaking of the Four Seasons, Kaine, having been busy drinking, has his bags packed, ready to leave town for good, but Araceley blocks his path (and holding up a swear jar for him to “donate” money into).  Officer Wally Layton and Dr. Donald Meland are also trying to convince Kaine not to leave, but Kaine, rattled from the events of “Minimum Carnage” tells them he’s through with being a hero, and he’s off to Mexico like he had originally planned.  However, the beer Kaine has drunk kicks in and he passes out (being his clone, Kaine also shares Peter's low tolerance for alcohol).  As Kaine’s friends drag him over to the couch, a woman from guest relations arrives and tells them that, because the Ambassador of Belgium is arriving and booked the Presidential suite months in advance, Kaine will have to leave.

In the lobby downstairs, Annabelle Adams is on the phone with her ex when the robbers arrive all dressed as Santa Claus and carrying sub-machine guns.

Upstairs, Wally, Dr. Don, and Araceley try to figure out how to make Kaine stay.  Araceley puts on Kaine’s Scarlet Spider mask to fix it, explaining to Dr. Don and Wally that Kaine’s costume can self-repair from mere thought.  The phone rings and, before anyone can answer it, Araceley tells them it’s Annabelle and that she’s scared.

Downstairs, the leader of the Santa Claus robbers demands to know where the vault is or they’ll start shooting hostages.  And the one they grab first in Annabelle.

Upstairs, Araceley tries to wake up Kaine while Wally, much to Dr. Don’s protests, gets his gun and heads downstairs to see if Annabelle is in trouble and Araceley follows, leaving Dr. Don alone with a passed out, drunken Kaine.

Downstairs, the manager tries but is unable to open the safe because it’s on a time lock.  Annabelle then tells the robbers that if they’re looking for some real money, then one of the guests at the hotel is loaded--the Man in the Presidential Suite.

Upstairs, Dr. Don is trying to wake up said Man in the Presidential Suite with lots of coffee, and Kaine begins mumbling about being a monster made specifically for killing, and that he killed Louise Kennedy (Kaine’s detective love interest during the Spider-Man: The Lost Years) much to Dr. Don‘s shock.

Meanwhile, Wally tries to call for back-up, but gets no response.  Araceley arrives to help, but Wally tells her to stay back.  Wally then knocks out one of the Santa Claus robbers, but this alerts the others, and they all open fire.  One of them radios the boss what’s happening, but he tells to deal with it on their own as he’s heading towards the Presidential Suite.  Araceley is then standing right next to the Santa robber and he points his gun at her.  However, she tells him--with a strange, wide-eyed look--that he’s scared and that it’s okay to be scared.  And suddenly, the Santa robber begins screaming and backing away from Araceley in complete terror, much to Wally’s astonishment.

Upstairs, a recovered Kaine tells Dr. Don about Carnage, that his failure to stop him earlier proved to him that he wasn’t a hero and should stop pretending to be one.  Dr. Don, however, points out how Kaine is a hero, pointing all the lives he has saved ever since he’s arrived in Houston, the people he did manage to save during “Minimum Carnage” and that, whatever Kaine did in his past is in the past.  He’s a superhero now and perfect for Houston since the city is, like Kaine, “rough around the edges.”  At that moment, the leader of the Santa gang kicks the door in with Annabelle in his clutches demanding that Kaine start filling his duffle bag with cash--which, just as Annabelle was counting on, ends up being the biggest mistake of the Santa Robber’s life. 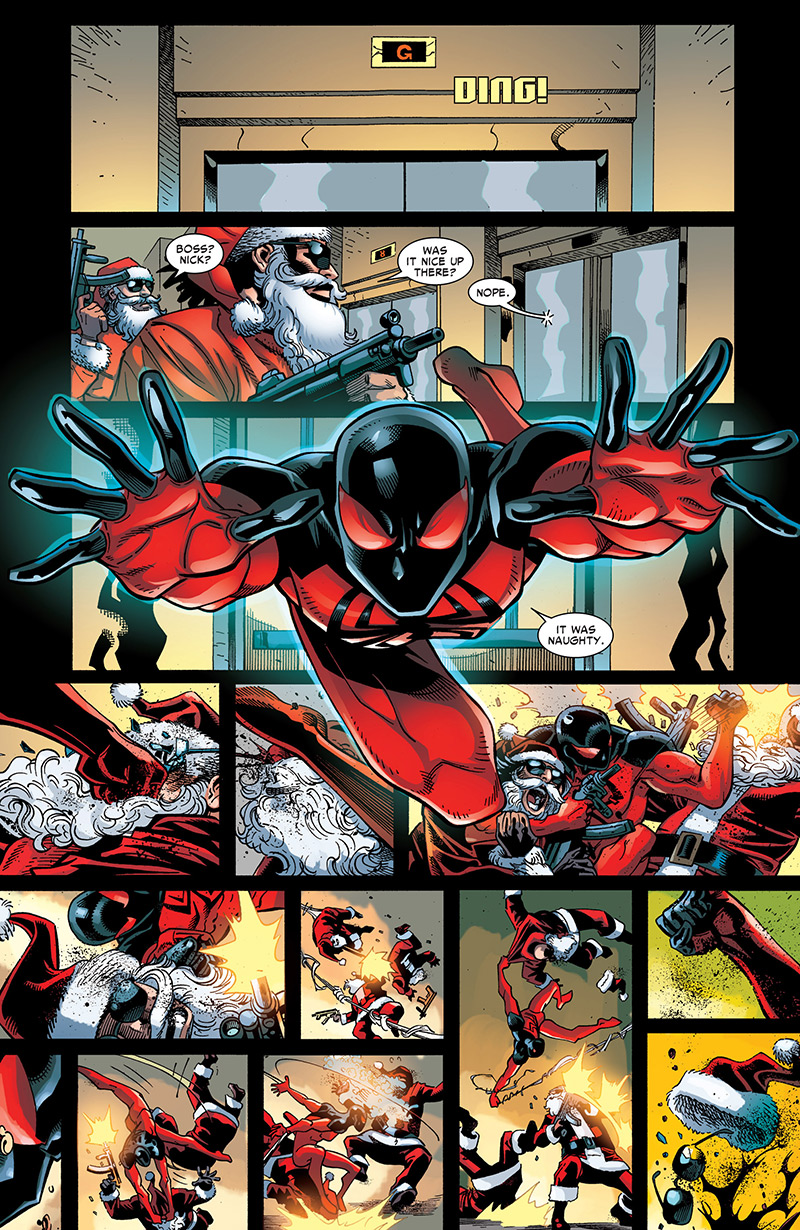 We then cut back to downstairs as the elevator dings and out jumps Kaine in full Scarlet Spider costume, and quickly kicks all the remaining Santa robbers asses (followed by a splash page that is, without question, the most awesome display of sheer, unadulterated bad-ass of the year).  Wally makes a show of how Kaine coincidentally showed up in the nick of time, and the manager of the Four Seasons thanks Kaine for stopping the robbers, telling him he can have anything he wants.  With urging from Araceley, Kaine tells the manager that, from now on, no Belgians are to stay in the hotel.

The issue closes with Kaine on the rooftop with Araceley, Annabelle, Wally, and Dr. Don, thinking that, after all this time, he may have found a home with people who care about him and who he cares about, and that, for once, he can let himself be happy.  Downstairs, however, a letter has arrived for him…from Julia Carpenter.

THOUGHTS
Now this is more like it!  Granted, this is a rather simple story, but it’s told and crafted extremely well by both Yost and Brown, balancing the right amount of suspense, action, and humor to make for a very good done-in-one tale.  More importantly, this feels like a significant step forward in terms of Kaine’s development, as he finally gets called on the carpet for his angst and, by issues end, seems to have embraced his new life.  Even if one doesn’t know all the full details of what Kaine has experienced, Yost has made it clear throughout his run and in this issue that Peter’s first clone has been on a path of redemption, that he believed he has failed to live up to his second chance, so when the last pages do occur, it’s a much deserved and satisfying happy ending. 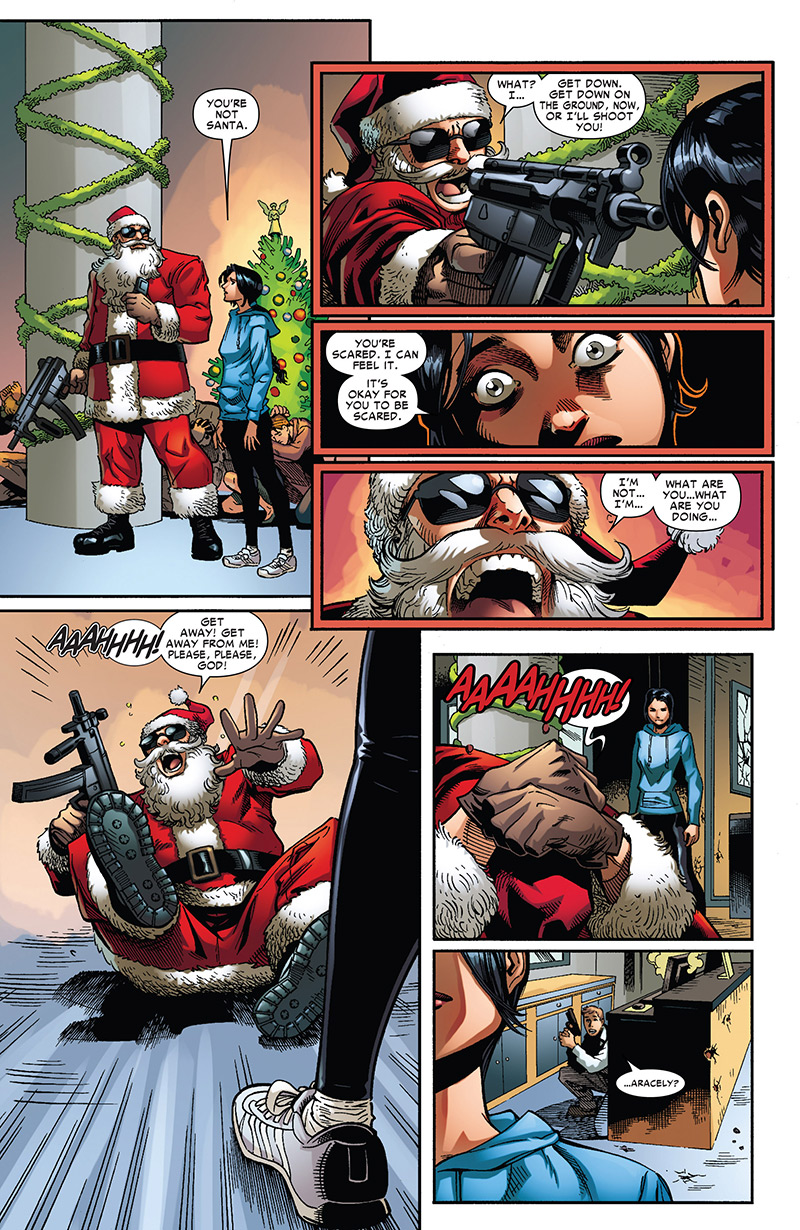 Likewise, all of Kaine’s supporting cast gets to shine, including Dr. Don, who, even upon learning that Kaine’s drunken confession of the murder of Louise Kennedy, his faith in Kaine doing the right thing never wavers.  But it’s Araceley who steals the issue with every panel that she’s in, from her demanding Kaine pay up every time he swears to her overall tenacity, she’s proved to be a really fun character.  Furthermore, this issue makes it explicitly clear that she does indeed have psychic abilities, and considerable ones at that.  Which, of course, adds more questions about Araceley’s past which is sure to offer interesting wrinkles for Kaine down the road.

And Reilly Brown, no longer simply doing back-up pencils like he did during “Minimum Carnage,” delivers, along with Terry Pallot‘s inking, what is probably his best issue to date.  Sure, it’s not of the same quality as Ryan Stegman, but it’s miles better than Khoi Pham, with some very energetic pencil work and well-designed layouts.  The scenes in which Kaine attacks the Santa robbers in particular is the absolute highlight of the issue, with the panels conveying a genuine cinematic feel followed just an absolutely incredible and iconic splash page that just screams to become a poster.  The only drawback is Andres Mossa’s coloring, which give it a rather washed out look in certain scenes, save for those two pages I described that is.

In closing, this was a very good read, particularly after the disappointing “Minimum Carnage.”  Sure, given the nature of comic books and the cliffhanger involving Julia’s letter at the end, Kaine’s new found high spirits will undoubtedly be short-lived.  But for the time being, it’s a great way to close out the first year of the Scarlet Spider series.  Merry Christmas and Happy Holidays, everybody! 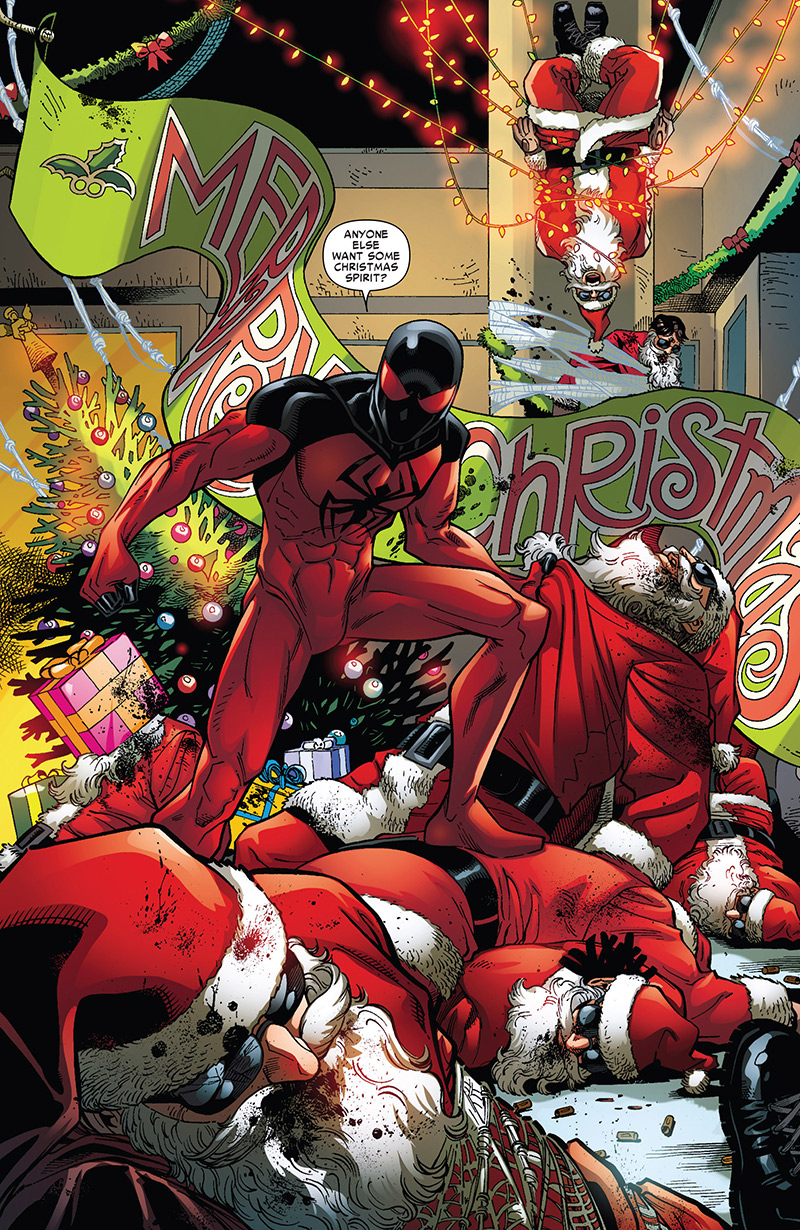