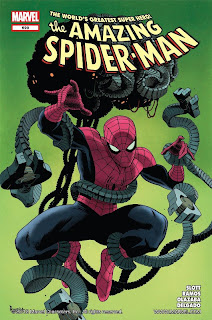 As it turns out, Peter's brain has been switched with Dr Ock's. We now have a Peter Parker living in a dying Dr Octopus' body. As in the last issue, Peter almost dies. Fortunately, in this issue, the nurse cuts Doc Ocks chest open and massages his heart by hand ( Whaat!?)

Coming back to life, Peter thinks a little about how he got into this situation. He remembers Dr Octopus, in Peter's body from the last issue, saying that he had all of Peter's memories. As such, Peter tries to recollect Dr Ock's memories. Eventually, he realizes how his brain got switched.

Apparently, every time Peter used Dr Octopus' tech - during Spider-Island, and in his most recent armored suit from Ends of the Earth, he was actually giving his enemy full access to his thoughts. All the while in prison, Doc Ock was controlling a tiny octobot, filled with his brain patterns. Somewhere between Amazing Spider-Man 697 and 698, or possibly in 697 itself, the octobot caught Peter unaware, while his Spider-Sense was down and transferred brain patterns the other way around. 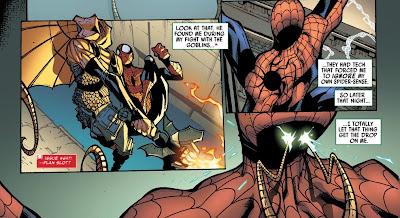 Peter's plan is to re-control the little gold octobot and warn the Avengers. Just at that moment however, the Lizard approaches him in prison, telling him that he is actually Dr Connors trapped in the Lizard's body. Peter has trouble believing the Lizard. As such, he decides that sending the octobot to the Avengers is not such a great plan. 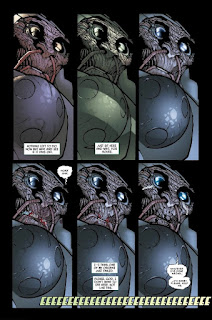 Peter then searches Doc's brain for an escape plan. He chooses one and sends the octobot to kick start the plan. Unfortunately, this uses up all that is left of the little octobot's power. Peter is left with no choice but to wait and hope that his plan works.

After waiting for what seems like a long while, Peter soon hears the alarms. In no time, he is broken free from prison by Hydro-Man, Trapster and Scorpion. According to the 'plan' they are to free another two villains. Peter refuses to free any of the other though. He does stop for a second and ask Curt( The Lizard) if he wants to join them. Curt refuses and simply snorts.

Once Peter reaches one of Dr Ock's secret bases, he then orders for Scorpion, Hydro-Man and Trapster to bring Spider-Man ( Dr Ock) to him - alive.


Thoughts
I didn't quite enjoy this issue as much as the last. Reason being that the story itself, although highly informative - tying lots of loose ends from the last issue, is not that interesting. Essentially, all that happened in this issue is Peter found out what happened to him, and escaped the prison.

Probably, my favorite part about this issue is the fact that Peter finally found out that Curt Connors was trapped inside the Lizard's body.

There is a scene I skipped in my review, where Peter imagines what Dr Ock is doing with his body - to his friends and family. Obviously, Peter imagines the worst.

There is a question of when exactly the octobot attacked Peter. From this issue is appears as though it occurred during the Hobgoblin fight. However, in issue 697 itself, I remember clearly that the octobot was still chasing him at the end of the issue as depicted in the scan below from that issue..

Well, forget technicalities. Till the next review..