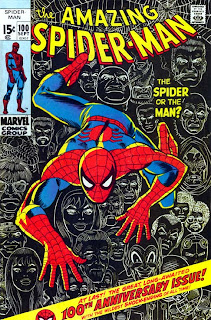 When determining the future of the Spider-Man titles, Marvel also has to figure out what the series is about. What makes this book different from any others? One group suggests that the book is about growth, and another that it's about the adventures of a young man. These views are somewhat irreconcilable. Though there's also a group that wouldn't have minded the series freezing a status quo in place at some point in the middle, where it's no longer a series about a man younger than the typical superhero, nor is it a book about a guy who will continue to change in significant ways.

There are also questions about what type of stories should be told, and what type of events should be allowed. Should there be a commitment to change approach, as the writers and editors stick with previous developments whenever possible? Should there be an illusion of change approach, with writers and editors mindful of making sure that their successors can ignore their accomplishments?

One More Day changed the rules, as then Editor-in-Chief Joe Quesada picked a side. While the erasure of the marriage was controversial, it wasn't the only thing that happened. Harry Osborn came back from the dead. And if any of the writers had been interested, he would have been joined by Gwen Stacy. Aunt May forgot that Peter Parker was Spider-Man. This was all preceded by the entire Spider-Man Unmasked era, which only occurred because all involved in crafting the stories knew that a magic reboot was coming. This may have backfired as the resulting "Back in Black" period, essentially meant as a filler to give the Brand New Day creative teams more of a head start, resulted in the best sales of J. Michael Straczynski's run on Amazing Spider-Man, as readers demonstrated an interest in a status quo unlike any they had seen before on the title.

One More Day is going to figure into many discussions about the future of the Spider-Man comics. Should Peter Parker ever learn about the deal with Mephisto? Should the marriage be restored? It seems that the intentions of all involved were to later ignore the story as much as possible, although that will be problematic, considering how important those four issues were to the status quo. Of course, writers can focus on their own stories, as well as the backstory from earlier arcs, and the 150+ issues since, but the lack of follow-up to perhaps the most consequential Spider-Man story of the last twenty years is glaring.

The decision to ignore One More Day still represents a choice in how to deal with the aftermath. But it's possible for Peter and Mary Jane to reconcile, without ever remembering that they've already been married. It could be that the post-One More Day era was mostly a speed bump in their relationship, with a reunion as obvious in retrospect as their reconciliation in Amazing Spider-Man Volume 2 #50. Peter could go back to being a high school teacher, Aunt May could learn his secret once again and Harry Osborn could die a hero once again. Though, for the moment, there is something refreshing about not knowing how all the stories are supposed to end. 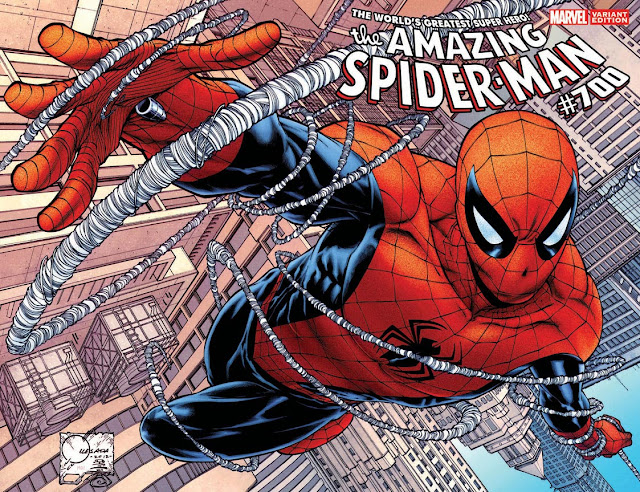 Even if the decision is made to bring Spider-Man's story to an end, there will be other debates. Is this a character who is supposed to have a happy ending? What comes next? Should the Marvel Universe keep ticking along without the Peter Parker Spider-Man, or should it be replaced with something else?

Until we figure that out, my recommendation is to go with the approach that works best in the long term. An illusion to change approach is key to preserving what works best about the character and the series, while also helping avoid bringing it all to a premature end. We'll still get great stories like Unscheduled Stop, Spider Island.and even Dying Wish. With a commitment to change approach, we might get some stories. But then it would stop. And I'm not ready for that just yet. 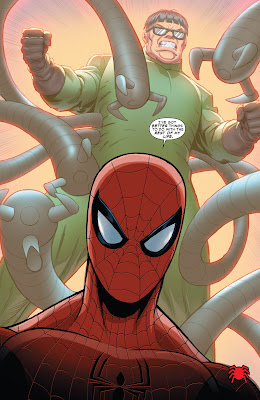 In the last twenty years there have been five Spider-Man animated series. The solid 1990s Fox animated series is probably part of a reason I'm such a big Spider-Man fan. That was followed by the less successful Spider-Man Unlimited, and the MTV cartoon, both of which lasted one season. The Spectacular Spider-Man was the best of the best, although there were legal issues after Disney bought Marvel, and that was replaced with the less universal Ultimate Spider-Man. I'm not as interested in that one, although I wouldn't be surprised if it's replaced in the next few years.

Regardless of what happens to Sony there will probably be a somewhat steady stream of new Spider-Man films. I don't know if they'll reboot the franchise again at some point, although it wouldn't surprise me. It's also entirely possible that it'll become the James Bond films, as the series will continue the same narrative with new actors playing the recurring cast members.

The success of Ultimate Spider-Man, the comic book series, has been remarkable. The Ultimate Universe is probably the most popular new imprint Marvel has introduced in the last twenty years. However, while Brian Michael Bendis still writes Ultimate Spider-Man, this version of Peter Parker has literally gone to Valhalla, replaced by a newcomer. It's a decision that made sense for a variety of reasons, helping to distinguish the classic universe from the more contained Ultimate universe.

All of this serves to show just how remarkable the continuation of the classic Marvel Universe, as well as the original Spider-Man, has been. We're getting new adventures of the same hero who was introduced in the pages of Amazing Fantasy #15. Superman's been relaunched four times. Star Trek just got relaunched. Doctor Who may just be the only other series in any other media in which the same narrative continues after nearly fifty years, although that also includes a fifteen year intermission.

It's a bit odd to praise the continued success of the Spider-Man comics while the current "Dying Wish" storyline in Amazing Spider-Man is a promised as a conclusion to that title, paving the way for a Superior Spider-Man who is not supposed to be Peter Parker. But if there's one thing I'm confident about, it's that Dan Slott has a long term plan for the series, which may involve the main character taking a hiatus. It wouldn't be the first time.

In the Clone Saga, Ben Reilly was supposed to be the new Spider-Man. But fan reaction to that was rather negative, exceeded only by the internal reaction within Marvel's staff, so Peter Parker was back soon enough. A current difference is that Dan Slott presumably has an endgame. It's worth looking at the positives and negatives of the hiatus.

An obvious problem is the lost revenue when one of Marvel's biggest characters disappears for an extended period of time. The team books in which Spidey currently appears will be less appealing, and writers will have to shelve planned team-up stories. (Negative) However, with Superior Spider-Man replacing the Amazing Spider-Man, this is somewhat mitigated. Writers like Mark Waid and Christopher Yost will also be able to play around with the new Spider-Man, and artists will have the opportunity to work on a subtly different character. (Positive) 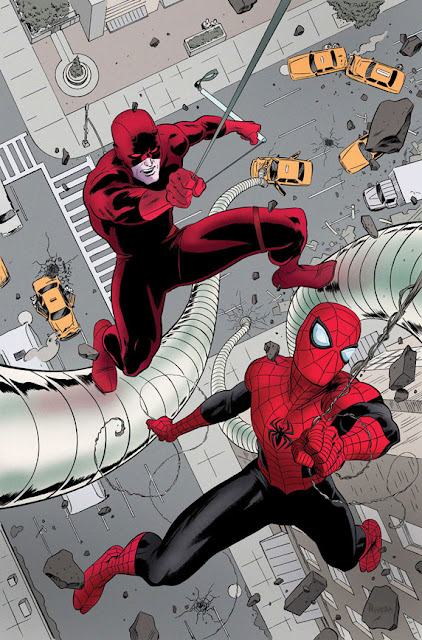 Spidey's absence would give other similar characters a chance to shine. The new attention could allow the second stringers to be better-positioned for the future. The new Superior Spider-Man would remain a prominent character even when the original returns. And when Spider-Man comes back, it will be a big deal. (Positive)

Either Marvel's going to have to keep details about the original Spider-Man's return a secret (the new schedule/ direction/ creative team) for a long time, or readers are going to be waiting a while for a project that's probably going to be cooler than anything published at the time. (Negative) This has been mitigated by the new possibilities

There may be pressure to do the deck-cleaning stories before the hiatus. These are time-consuming, get a disproportionate amount of attention and tend to suck. (Negative) On the other hand, this is essentially what we got with Ends of the Earth (which featured the defeat of the Sinister Six), No Turning Back (which featured the defeat of the Lizard) and the Hobgoblin War, which revealed the fate of Roderick Kingsley. There haven't been many complaints about the quality of the stories which tied up the various Brand New Day/ Big Time related loose ends.

There will be a tremendous amount of pressure on the post-hiatus creative team. Moreso than usual. So it'll be more of a disaster if something goes wrong. See JMS's Superman: Grounded, coming in the aftermath of an year-long Superman hiatus. (Negative) If Slott's post-hiatus work sucks, the next guys will have a similar opportunity to wipe the slate clean, without the need for a hiatus. And if his work is good, it's essentially the equivalent of allowing him to work on a different type of series, allowing him to be refreshed creatively when it's time for the inevitable comeback. (Positive)

It gives an opportunity to go in a new direction in terms of scheduling. A head start could make deadlines much more comfortable. A head start means that the creative team is working on material far ahead of everyone else, so it could end up being out of place with the rest of Marvel's product, with the writers and artists less able to respond to new developments. It also restricts the ability to respond to the reactions of the fans. (Negative)

A hiatus elevates the tension in the last Spider-Man stories before the intermission, and it means that the attention to the last Spider-Man story prior to the break won't overshadow the eventual return. Look at the hype for Amazing Spider-Man #698. A hiatus is an effective way to kick off a new schedule. So if you think Amazing Spider-Man functions better as one of three monthly titles or as a monthly with 60 pages of content or as a weekly with occasional intermissions (my ideal schedule), that's one way to kick it off. (Positive) 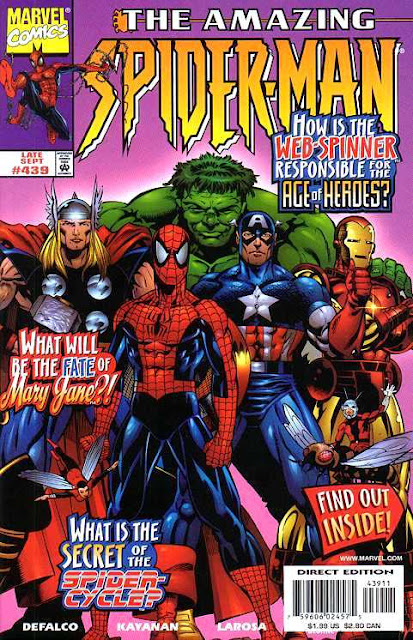 Dan Slott has joked that he wants to write Spider-Man forever, and that his neighbor's newborn may just be young enough to be his successor. I've enjoyed his run so far, so I'd love to see more. At some point, I'd hope to see more good stories by excellent creators. They're not going to stick around forever, but I'd hope to see each of them replaced by someone as good (for example if Millar/ Bagley leave Amazing Spider Man after an year, I'd love to see the book in the hands of Brubaker/ Finch.) I hope that the writers would consider the impact of their stories on the Spider Man comics 20 years later.

I hope to see continued success for the Spider man books and movies. I'd like to see the books operating under the idea of the illusion of change in order to keep the character fresh for future Spider Man writers, without the need for a Crisis of Infinite Earths type retcon for the Marvel U. And at some point, I'd love to start writing Spider Man stories.


In 2099, if I'm still alive that'll be great (I'd be 114.) If not, I'd still want future readers to enjoy the adventures of Peter Parker Spider Man, without any relaunch of the Marvel U. Miguel O'Hara could wait another hundred years.