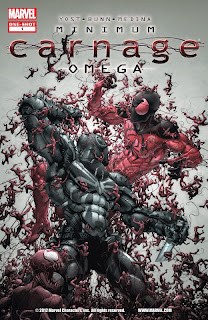 Continuing from where the last installment of Minimum Carnage left off in Venom # 27, we see Houston, getting infected by mini carnage symbiotes! While the Microverse may have been temporarily saved, Houston is now paying the price for Venom's and Scarlet Spider-'s good works. ( Carnage was last sent from the microverse back to Houston, ahead of our two 'heroes.'

Back in the Microverse, Venom and Scarlet Spider prepare to head back to the real world. Venom is given a few 'sonic' weapons to use against Carnage. Before long, our heroes and the reporter return home. Unfortunately, they returned micro-sized. Dr Ketola warned them this might happen, but she also said that the effects would eventually wear off and that they would return to normal size. This news came as no comfort however, knowing that Carnage had arrived first.

Pretty soon we see a full sized Carnage, and an army of tiny mini carnages attacking civillians. Carnage himself however concentrates of killing our heroes. All this while, the reporter girl somehow manages to stay clear of danger and simply hides behind a wall. ( What?)

Just as Carnage seemingly is about to kill both Venom and Kaine, they start growing bigger. Once back to full size, the fight evens out and pretty soon Carnage is defeated. ( Venom threw a sonic sound grenade down Carnage's mouth)

Once Carnage was down and reverted to Cletus Kasady, Venom called the Avengers to take him into Custody. Not wanting to risk anymore attacks from this maniac however, Kaine pierces a stinger through Kasady's right eye, out his head ( to kill him). Venom disapproves, but nothing can be done.

In the epilogue, the Prometheus Pit is dismantled ( which opened the portal to the microverse in the first place), and we find out that Cletus Kasady's body survived with the help of the symbiote. His mind however is forever destroyed, resulting in a body controlled by the symbiote, with no human influence whatsoever. Obviously, Carnage is sedated in captivity at the moment, but if he ever gets out, he will be more dangerous than even before.

Thoughts
Sadly, the whole minimum carnage series was not as good as I had hoped. The concept of getting Venom (Flash) and Scarlet Spider ( Kaine) teaming together to take out Carnage sounded absolutely perfect. Unfortunately, the actual story did not live up to expectations.

Compared to the last two Carnage mini series, this one lacked the ability to grab the reader's attention. Somehow, having most of the story take place in the Microverse ( a place I really could not care for), and having a pretty lame bad guy from the Microverse did not help at all... 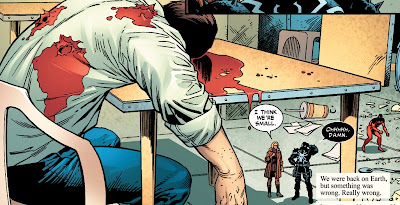