Spider-Man and the Thing help out two brothers who are in way over their heads... 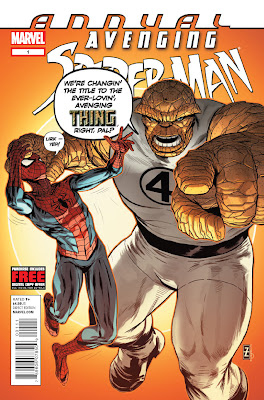 As Spider-Man and the Thing both start their days off on the wrong foot, two brothers search Central Park with a metal detector in the hopes of finding something valuable to solve their money woes.  They wind up stumbling upon a strange device that, unbeknownst to them, causes everyone in its vicinity to fly into a rage and accidentally turn it on.

As the brothers ride home, their cab suddenly comes to a halt, as the street is being congested by angry New Yorkers fighting with one another.  The brothers realize that the device is causing it and decide that they could sell it to some criminals for a fortune.  One of them arranges a meeting with a gang leader and then steals a cab.  Spider-Man, attempting to stop everyone from killing each other, spots the brothers' cab speeding away and attempts to follow them.  Unfortunately he's stopped short by the Thing, who is also feeling the effects of the device.  Spidey fights the Thing briefly before retreating to follow the brothers.  The Thing, now joined by Franklin and Valerie Richards, get the Fantasticar and follows him.

Meanwhile, one of the brothers tells the other that he's having second thoughts, and is subsequently ejected from the cab.  The brother reaches the gang hideout  but quickly finds that he's in over his head.  Luckily, he left the device on, which causes the gang members to start shooting each other.  Spider-Man and the Thing then crash through the ceiling, still fighting.  Amidst the chaos, the device is dropped on the ground which reverses its effects, causing everyone to start loving one another.

﻿
With everyone lovey dovey, the brother is able to get the Thing to smash the device, turning everyone back to normal.  As the Thing takes care of the remaining gang members, Spider-Man webs both brothers to a lamp post for the cops.  But after what just happened, the two brothers now seem grateful just to have each other.

While it was nice to have Rob Williams back on Spidey, this particular team up failed to make an impression.  While there were funny moments, (particularly from Franklin and Val) they were few and far between as Williams couldn't seem to resist the urge to stick corny pop culture references into much of his dialogue.

The Annual spends a lot of time focusing on the relationship between the two brothers, who we never really come to care about.  It was the typical relationship between the more reserved, level headed brother and the hard headed impulsive one.  You could see the story beats for these two coming from a mile away.  The best part of this issue was Brad Walker and John Livesay's artwork.  Their Thing and Spider-Man are both rendered with a lot of detail, making the book a pleasure to look at throughout.

While it contains nice artwork, the story of Avenging Spider-Man Annual #1 quickly wears out its welcome.  It would have been better served as a normal sized issue.
Read More

Spidey and Deadpool team up...  Madness ensues...  You know the drill... 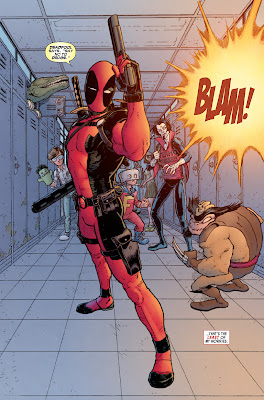 Peter Parker is having that nightmare we've all had at some point where we manage to walk into our high school wearing nothing but our underwear.  But Peter isn't having your typical pantsless dream, because Deadpool is also there, shooting everything that moves.  Deadpool explains to Peter that a supervillain is attempting to control Peter's mind and that he's been charged with helping Peter navigate through his dreams so he can wake up.  The way to do this is to travel through four levels of dreams until Peter eventually reaches consciousness.  What follows is Spider-Man and Deadpool battling R.P.G. nerds, homicidal shop teachers, and the breakfast club. 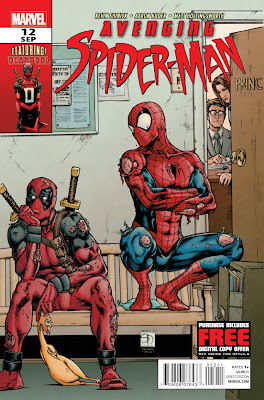 Eventually, Spider-Man wakes up in prison, where Deadpool reveals that he was controlling Spider-Man all along so that Spidey could help break out his employer, the Hypno-Hustler (who has promised Deadpool that he's found a way to kill him, which is apparently what Deadpool wants), out of jail.

Deadpool and a new and improved Hypno-Hustler (thanks to his cellmate, the Tinkerer) attack Spider-Man, who is forced to retreat.  Hypno-Hustler reveals that Deadpool put a transmitter on Spider-Man's mask which allows him to hypnotize Spidey from anywhere.

Elsewhere in the prison, Spidey is feeling the effects of the Hypno Hustler's power.  As Hypno-Hustler lets ordinary prisoners and C-list supervillains out of their cells, Spider-Man sees them as his deadliest adversaries.  Despite the hypnosis, Spider-Man is able to take them all down, so the Hustler hypnotizes Deadpool to go and kill Spider-Man.  The plan fails however, because Spider-Man is able to guess Deadpool's release word: Ryan Reynolds.

Spidey and Deadpool take down Hypno-Hustler before he escapes, but Spidey isn't through yet with Deadpool.  He is able to use the Hypno Hustler's goggles to hypnotize Deadpool into experiencing the hallucinations he experienced at the beginning of the story, leaving Deadpool doing the time warp in a prison cell. 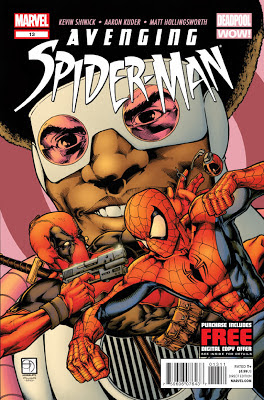 Kevin Shinick (of Robot Chicken fame) delivered a fun two part story here.  Issue #12 was particularly strong, in no small part due to Aaron Kuder's artwork.  You can tell Kuder had a good time packing the issue with all sorts of crazy visuals; it's worth a re-read because your bound to notice something you didn't the first time around.  I was disappointed that Spidey's high school supporting cast scantly appeared in the issue though.  Seeing Deadpool give Flash Thompson a swirly for instance, would have instantly made the issue worth $3.99.  It felt like a missed opportunity.

Issue #13 played out more like a typical Spider-Man/Deadpool team up.  It's always fun to read these two characters interacting, and Hypno-Hustler's inclusion ensured that all the typical jokes about disco and the 70's were found here.  You'll definitely have a smile on your face by the time the story ends, and really, what more could you ask for?