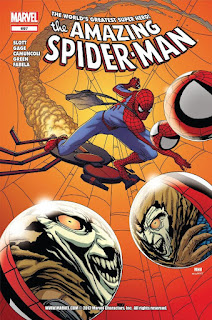 Starting exactly where Amazing Spider-Man 696 left off, Peter and Max try their best to escape from the two Hobgoblins.

The Story
As they run, two things happen.

1) Norman's Osborn's Goblin key, which Max stole begins 'pinging,' leading to the assumption that the Goblin hideout must be near.

2) Peter's Spider-Sense starts acting up again as they run further away from the Spider-Sense enhancer which he just busted. ( there are many of these devices across the city)

At some point during the chase, we find out that Max didn't come empty handed, but had actually come with a Force Shield powered by his cell phone battery!

Peter and Max eventually find their way to the Goblin Safe - filled with the Goblins gadgets. Unfortunately for them, Norman had a self destruct sequence in place without a password. Peter quickly calls his friend Harry, whom we have not seen for a while now. Harry gives them the password, but more importantly, has changed his total appearance and seems to be running away. ( I must have missed something, when did we last see Harry again? ) 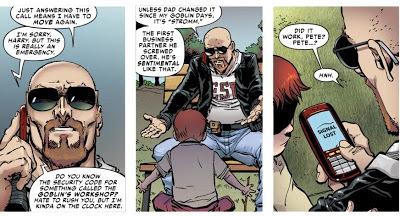 Realizing they can't hide in the saferoom forever, Peter comes up with a plan to 'dress up' as Spider-Man ( Norman has some Spider-Man costumes in his vault). He says he will distract the Hobgoblins for a while. Max can escape out the back ( they found a secret backway out) and save Norah, who is about to be blasted to bits by a drone Kingsley sent after her in an attempt to get Peter and Max out.

In the midst of the plan however, Tiberius Stone manages to get the Spider-sense enhancer working again. At this point, Peter's brain starts 'exploding' again. This time however, Peter remembers his Kung Fu training and begins to block out his Spider-sense altogether. 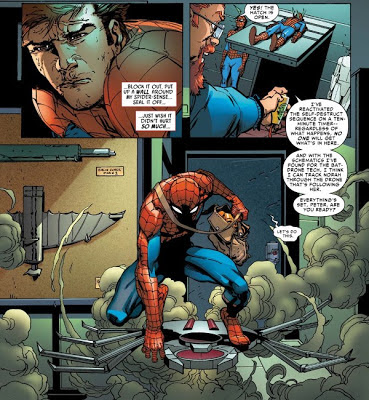 Spider-Man soon takes on both the hobgoblins, using some gadgets he found in Norman's Vault, including a Spider-Glider. In the end, Spider-Man manages to buy Max enough time to reach Norah and protect her from the blast with his force shield. After hearing that Norah was safe, Spider-Man, not wanting to risk his safety without Spider-Sense, swings away to destroy the remaining Spider-Sense enhancers.

Hobgoblins, Phil Urich wants to chase after Spider-Man, but Kingsley back stabs him. He does however, offer Urich a chance to remain Hobgoblin, after beating the crap out of him.

In the epilogue, we see the Kingsley has a bunch of crooks working for him around the globe, most recently Phil Urich as well.  We also see Madam Web is coma, and Norman Osborne, not in is ward. ( why was he here again? )

Thoughts
All in all, this was a pretty okay story. The main idea here was to resurrect Kingsley, and show that he is boss! Peter Parker barely comes up with a good reason to be able to pull off being Spider-Man in front of Max. I was pretty impressed with Max's force shield however. Then again, if he is such a great inventor, why not have him come up with something like that in mere minutes of distress... honestly, anything is possible.

Finally, from the looks of things, we will certainly be seeing Doctor Octopus for the 'last time?' in the next issue. (I left out the only two scenes suggesting this in my review )