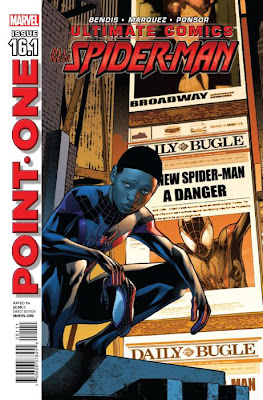 Betty Brant sits at her computer reviewing the footage of the Prowler's death.  She is able to isolate the last words the Prowler said to Spider-Man before he died.

The next day, at a meeting at the Daily Bugle, Betty proposes to J. Jonah Jameson about doing a story about the new Spider-Man, suggesting that him and the Prowler were related.  With the okay from Jameson, Betty conducts an investigation into who the Prowler was, leading her to his old apartment.  As Betty searches the empty apartment she finds the body of the spider that bit Miles Morales and gave him his powers.  Betty then confronts the former Oscorp scientist who worked with the genetically altered spiders.  The scientist tells her it was a genetically altered spider that gave Peter Parker his spider powers and suggests the possibility that it might have happened again with the new Spider-Man.  Betty next spies on Miles Morales and his family as they return home from a movie.

Betty tells Jameson that she believes that the new Spider-Man is Miles' father.  Jameson tells Betty that he is not going to run the story, saying all it will accomplish is the destruction of the man's life and family.  Betty storms out of the room, telling J.J. that if he won't run the story, she'll find someone who will.

But when Betty returns to her apartment, she is murdered by Venom! 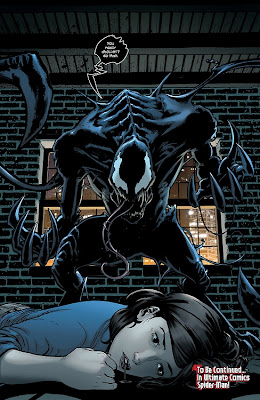 These point one issues are supposed to be good jumping on points for new readers, so I have to question why Marvel would release this while Ultimate Spider-Man is currently in the middle of a storyline.  Won't a new reader get confused if they pick up issue #17 and find that it's not a continuation of this one?

The story itself was well done, with the highlight being Brian Michael Bendis' portrayal of Jameson, who comes off as the hard ass publisher with unshakable integrity.  Bendis' J.J. isn't as fun as the 616 version, but he is more human.  By contrast, the Ultimate version of Betty Brant was pretty unlikable, and her death at the end of the story doesn't provoke much of a response.  However, it is interesting that Venom would murder her in the first place.

This point one issue serves as a well done, if unconventional introduction to the origin of Miles Morales, as well as a cool teaser for things to come.
Read More 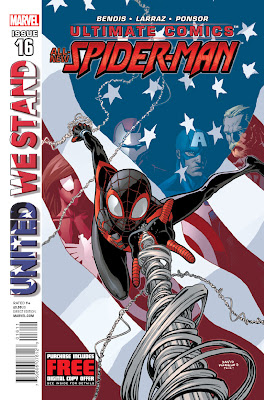 Aboard the Triskelion, Tony Stark informs Captain America about the new Spider-Man, whom Cap is eager to meet.  When they spot a news report accusing Spider-Man of being a murderer, Cap decides he needs to meet him now.

At the Morales household, Miles sits in his room still blaming himself for what happened to his Uncle Aaron.  His guilt is compounded when his father comes in to tell him about his uncle's passing. 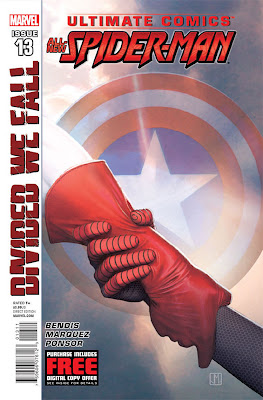 Later at school, Ganke attempts to reassure Miles that his uncle's death wasn't his fault.  Miles then receives a phone call asking him to meet in a private location.  Shaken, Miles makes his way towards the location when he spots Batroc the Leaper in the midst of robbing a jewelry store.  Miles reluctantly changes into Spider-Man and takes him out, while Captain America kneels on a nearby rooftop watching him.

Miles eventually arrives at the meeting location, where he comes face to face with Aunt May and Gwen Stacy.  After introductions, May attempts to give Miles a box containing one of Peter Parker's belongings but is interrupted by Captain America, who says that he does not want Miles to be Spider-Man anymore.

Cap tells Miles that he is too young to be Spider-Man despite the protests of Aunt May and Gwen.  Mary Jane Watson then shows up and asks Cap if the reason he is being hard on Miles is due to his guilt over what happened to Peter.  The debate goes on until Cap receives a phone call telling him he's needed.  Before leaving on his motorcycle, Cap tells Miles that if he disobeys him, he'll throw him in prison and calls his parents.  Aunt May suggests that Miles go and help Cap, but Miles points out that he won't be able to catch up with him.  May then hands Miles the box she was going to give him earlier, which contains a pair of Peter's webshooters!

Spider-Man is able to get the hang of his new webshooters and follows Cap to the Lincoln Bridge where the Rhino is wreaking havoc.  Spidey is able to help Cap defeat the Rhino, convincing Cap that Miles can be a superhero, but he is going to need training. 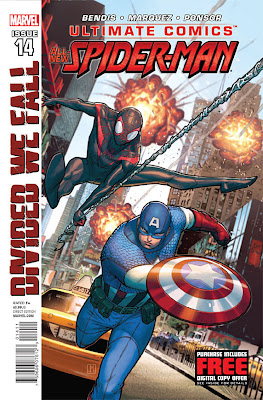 In their room, Miles shows an enthusiastic Ganke his new webshooters.

Later, Miles arrives at his house and finds police cars outside.  Upon entering, he sees his mom and dad being questioned by Detective Maria Hill.  Hill, responsible for the investigation into Aaron's death, questions Miles as to whether his uncle said anything to him before he died.  During the questioning, Hill reveals that it was likely Aaron's malfunctioning equipment that killed him, and not Spider-Man.  Although Miles is relieved to hear this, his father still blames Spider-Man for his brother's death.  Miles is able to successfully lie his way through the interview, prompting Hill to leave. 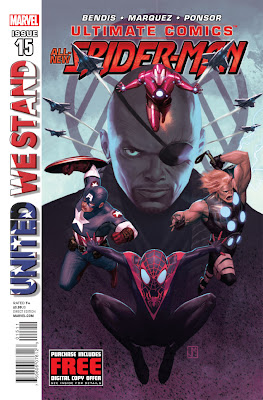 The next day at school, all the students are called into the gymnasium where they are informed that due to the United States being on the verge of collapse, school is being cancelled until further notice.  As Miles and Ganke pack up, Ganke suggests that Miles use his new found freedom to go help the Ultimates put the country back together.

Taking Ganke's advice, Spider-Man is able to, with some trouble, land on the Triskelion where he is confronted by Captain America and a group of soldiers.  Spidey tells Cap that he wants to be an Ultimate.

In New York City, Miles' father discovers that the street his house is on has been blockaded and that he is being denied access.  When he attempts to get through anyway, soldiers arrest him and send him to a detention facility. 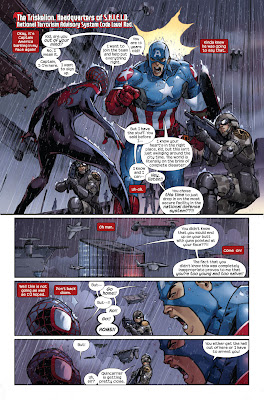 Captain America yells at Spider-Man, telling him he's out of his mind.  The Triskelion is then attacked by Hydra, forcing the two to work together.  After successfully repelling the attack, an impressed Cap concedes that Spider-Man can join the Ultimates.  Later, after Miles phones his mother to tell her he's alright, he heads to a press conference where Captain America announces he has just been elected President of the United States!

So apparently the Ultimate Universe is in the midst of a crossover.  I had no idea this was going to happen until I saw the banner on issue #13 of Ultimate Spider-Man.  Aside from Spider-Man, does anybody really care about the Ultimate Universe anymore?  As the stories get stranger and stranger, the line has begun to resemble Marvel's latest version of What If?  Captain America as President?  As a new status quo, it seems kinda silly.

Luckily, despite the over-the-top crossover event, Ultimate Spider-Man is still a kick ass book.  The event has in no way derailed Miles' personal journey to becoming a hero; Brian Michael Bendis has successfully been able to use the event to showcase Miles' heroism and insecurities.  His first encounter with Aunt May, Gwen and M.J. was a surprise, as all three didn't seem to have a problem with Miles taking over from where Peter left off.  When May gives Miles Peter's webshooters, it's a special moment for both characters.

Bendis also finds time for Miles' supporting cast, and once again Miles' best friend Ganke is the highlight.  Scenes like the one where Ganke suggests superhero catch phrases to Miles, followed by Miles showing Ganke his new webshooters, are among the best in the book.  Bendis has never forgotten that it's the human touches that truly make a Spider-Man book.  Miles' relationship with his father is also getting more interesting.  One can't help but expect that the father's incarceration will lead to a confrontation between him and his son (as Spider-Man).  David Marquez once again does a fantastic job on art duties.

However, the story does suffer from a bit of a repetitive narrative.  The same sequence of events literally occurs in both issues 14 and 16: Cap yells at Spidey, Spidey disobeys him, Spidey proves himself to Cap, Cap accepts him.  The first time was fine, but Cap's hostility got a little tiresome the second time around.  I'm also not a fan of Spider-Man joining the Ultimates this early, but then, I've always preferred Spider-Man as a solo hero.

Despite tying into a crossover, Ultimate Spider-Man is still focused primarily on Miles Morales' journey, as Bendis is able to successfully utilize the crossover to continue his story unencumbered.  Still, I'll be happier when things go back to normal.