This issue begins with Madam Web falling into comma and Peter being tied to a chair in Shadowland. Contrary to what I thought in my last review, Phil Urich aka the Hobgoblin did not suspect Peter and Spider-Man were the same person. He simply brought Peter to the King Pin because he knew Peter made gadgets for Spider-Man.

While sitting around in King Pins base, Peter notices Tiberius Stone - the traitor from Horizon Labs. Peter also finds out the reason for his Spider-Sense going haywire. The plan is to video tape Peter as a hostage and send it to Max, forcing him to come up with a way to contact Spider-Man and get him to save Peter. 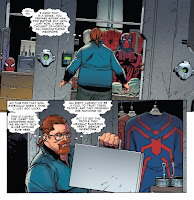 Once he receives the video email, Max breaks into Peters lab and sees all of Spider-Man's gear.Max manages to find the case the bad guys want, but can't seem to find a way to contact Spider-Man. Max decides to pull a bluff and approach the bad guys, trying to get them to believe that Spider-Man passed him the case and is watching from a distance.

Meanwhile, Roderick Kingsley - the real hobgoblin is busy ransacking Phil Urich's apartment, looking for things he can use against his imposter. He comes across a few photos of Norah.

Coming back to Madam Web, no one at the hospital can identify her as she had skinned her finger tips and had no ID with her. Some people think she might have been crazy as she was saying something about "...his future ending in a flash of gold." In the very next scene we see a gold octobot coming out from the sea. (what could this mean? #gianthint )

Anyhow, Max eventually turns up with the case, which we later find out contains the key to the Goblins stuff. As the King Pin holds it in his hands however, it is snatched away by Roderick Kingsley, dressed in his own Hobgoblin outfit. The two Hobgoblins then duel, distracting the bad guys.

At this point Max tells Peter that he brought some web shooters. Trying hard to focus, Peter manages to shoot a webline, pulling the Hobgoblin's glider down on the Spider-Sense jamming device.

From here on, things get better for Peter and both Max and himself begin making their escape. Peter is obviously careful not to give away his secret identity however.

The story ends however with the two Hobgoblins deciding to kill both Peter and Max, who have now run off with their precious key, before killing each other.

All in, a pretty decent issue. Hobgoblin fans would be glad to see the real Roderick Kingsley back in action and kicking ass. Peter Parker once again has some pretty decent luck with Kingsley's timing. Honestly, if it wasn't for all this hype about ASM 700, I'd think that this whole story would probably just end up fine with Peter making a safe escape, leaving nobody hurt.

Fortunately, this is not a newspaper comic, and things are gonna change leaving us fans holding to our seats (sorta). I'm not so sure Madam Web will come out of this coma the same though..