Infinite Spider-Man 13.5: Is Peter Doomed to Never Get the Girl? 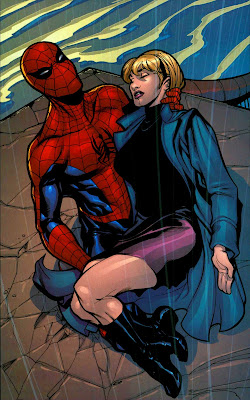 Since One More Day, some readers came to the understanding that Peter Parker won't get the girl, be it Mary Jane or anyone else. I didn't think much of it. The logic behind the decision was that there are more stories to be told with a single Spider-Man than with a married Spider-Man. His life wouldn't be stable, so he probably wouldn't keep the girl, but as long as the stories continued, he would have an interesting love life.

However, with the (likely misleading) hints that Peter Parker's story coming to an end with Amazing Spider-Man #700, it's worth considering what happens when there are no new adventures of Peter Parker as Spider-Man. My guess had always been that his story would come to an end in the usual way, with the hero riding off into the sunset with the love of his life. But that isn't necessarily the way this tale should end.

I recently read Supergods, Grant Morrison's autobiographical history of superhero comics. His take on the Silver Age was that the earliest heroes represented the Kennedy Man. They were handsome, intelligent optimists with gorgeous girlfriends/ wives, often with respectable professional positions in a scientific field. Examples included Barry Allen, Ray Palmer, Ralph Dibny and Reed Richards.
Morrison views Spider-Man as a response to that ideal. A guy who is naturally pessimistic, who sometimes screws up and who often doesn't get the girl. The hero of "the spotty, hormonal outsiders" who "revealed the truth behind the sugared lies of Barry Allen and Ray Palmer."

It sometimes seems that Morrison has done great work with every major superhero franchise except Spider-Man, so it is worth taking his interpretation of this character with a grain of salt. But it beings up some interesting questions. Was that Spidey's conceptual engine in the very beginning? If so, under what circumstances is it okay to change the conceptual engine? Shouldn't the thing that made the series so unique in the beginning be a part of the end?

Peter Parker had a love life, even in the Lee/ Ditko comics. But he did eventually did lose the girl, which made him different from the Kennedy Men. Liz Allen moved away, ending up with neither Peter or Flash. Betty Brant left Peter for Ned Leeds. And Gwen Stacy died.

However you define the first act of Peter Parker's arc, it doesn't end with the hero getting the girl. Amazing Fantasy #15, which could very well have been the only Spider-Man story, ended with Peter Parker as alone, and unlucky with women as he had been before the spider bite. By the end of the Lee/ Ditko run in Amazing Spider-Man #38, Peter & Betty had broken up. 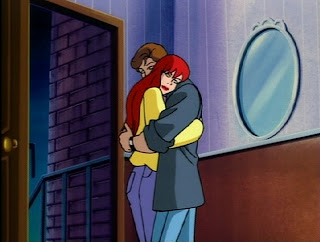 Peter Parker obviously got the girl in Amazing Spider-Man Annual 21, and some would cite that as the end of the era. But that seems arbitary. David Michelinie, the writer of that story, stuck around for nearly a decade, so it's not as if it marked a major change in creative teams. Two of the first stories with a married Spider-Man featured earlier writers revisiting their earlier work. Peter David penned a rematch between Spidey and the Sin-Eater, while former Marvel Team-Up writer JM Dematteis brought back Vermin for the six part Kraven's Last Hunt crossover. Todd Mcfarlane would soon become the most consequential Spider-Man artist since John Romita Senior, with the introduction of the most popular villain in decades, although that story served as a sequel to the alien costume saga from a few years earlier. David Michelinie had also been seeding Venom in his earlier Web of Spider-Man work.

Peter and Mary Jane did ride off to the sunset at least twice. During the Clone Saga, Peter and MJ went west to raise a family, while Ben Reilly took over as the new Spider-Man. Although that didn't take, and Peter was back pretty quickly. He quit once again before the 1998 relaunch, although that wasn't ever intended to stick. In both cases, members of the creative teams stuck around, continuing their work on the title when Peter returned.


There are also other versions of Peter Parker. While Spider-Girl depicts Peter Parker as a happily married father, Reign and Earth X feature him as a widower. The 1990s Fox Animated series ended on a cliffhanger, with Mary Jane lost in another universe. The first Spider-Man film had Peter realize that he can never be with her. He changed his mind in the sequel, although later films in the saga suggested that at some point, he would still have to choose between the girl and being Spider-Man.

The Amazing Spider-Man seemed to go in the same direction as the first Spider-Man film, until Peter decided to go against his final promise to Captain Stacy. Though it was hinted that this could end badly for Gwen. Unless they decide that a sequel's going to adapt the final Ultimate Spider-Man saga, rather than the death of Gwen Stacy. Ultimate Spider-Man didn't get to ride off into the sunset with the girl of his dreams. He just died. Which was also the ending of quite a few What If? books.

It's always satisfying to have the boy and the girl get together at the end of the story, but you could make the argument, that Spider-Man's story has served as a counterpoint to the ordinary. An unhappy or ambiguous ending could be more fitting.