Carnage continues his slaughter throughout the Microverse! 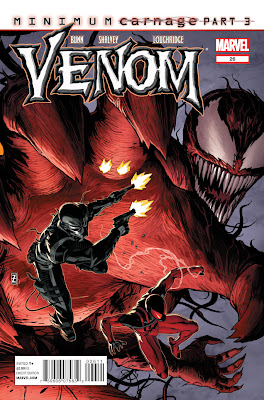 The Story - Minimum Carnage Part 3: The Madman & the Microverse

The Microverse assassins lead Carnage to one of their flesh factories that was once used to breed an army of killing machines.  The assassins inform Carnage that they want him to be the instrument of the Redeemer's destruction.  Katy Kiernan tells Carnage that the reason they brought him to the factory was so the assassins could reproduce his symbiote and create an army of Carnages...

As Venom rides aboard the Micronauts' spaceship, they tell him that they want him to go back home due to the corrosive effect his symbiote has on the Microverse.  However, the leader of the Micronauts informs the team that the Redeemer would like to see Venom.  The Micronauts' ship is then attacked by one of Marquis Radu's armadas.

Scarlet Spider is able to take down the giant monster who confronted him last issue.  He is then healed by the hooded figure, who is revealed to be the Redeemer.

Carnage slaughters all except one of the assassins who broke him out of prison.  He then asks the assassin he spared to lead him to Radu.

The Redeemer brings the Scarlet Spider to Radu's base, and tells him that he plans to heal Radu.  They are then attacked by Carnage.

When the Secret Avengers told Flash that they found a way to sedate his symbiote, I had thought that Venom had lost one of the key aspects that made him a fun character to read about; that fear of losing control of the monster within him.  Fortunately, Cullen Bunn seems to have no shortage of ways for Flash to lose control of the suit, bringing back that sense of tension and unease from when the series first started.

Minimum Carnage has so far been a great fish out of water story for both Venom and Scarlet Spider.  Reading their reactions to the crazy situations Bunn and Chris Yost have put them through has so far been a blast, though I'm not sure how they're going to keep the momentum going for another three issues.  Carnage fans should be happy that this story features their favourite character at his murdering best.  A shout out should also be given to Declan Shalvey, who handled the art duties for this issue; he draws a menacing Carnage.
Read More
Newer Posts Older Posts Home