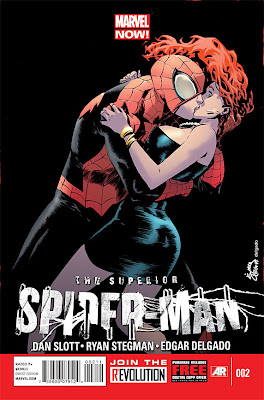 Almost exactly five years after One More Day, Dan Slott and Marvel plan to kick off a new direction of the Spider-Man series. Amazing Spider-Man will come to an end, at least for now. In its place will be Superior Spider-Man, as part of the Marvel Now! series of rolling relaunches.

So far, we've been told that this new Spider-Man is not Peter Parker. Although McNulty suggested that it may still be Peter Parker, operating under a new identity. Marvel representatives say that the man under the mask is supposed to be a character with some Spider-Man pedigree. And according to Dan Slott, this new guy will be romantically involved with Mary Jane.

So far, I've enjoyed Dan Slott's work on the series. I think he has a good sense of the character, and that the status quo of the Big Time era had been worth exploring. Whatever happens with the Superior Spider-Man, it seems to be a story that Slott wants to tell, rather than an editorial mandate. I trust him to consider the long-term implications of the development, even when he announces a project with a radically different status quo than the norm. 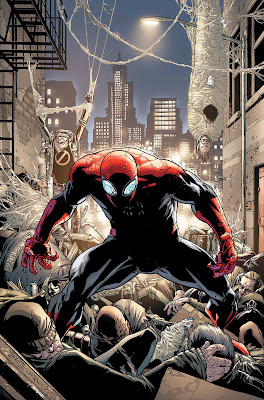 Before Superior Spider-Man was announced, there was a lot of speculation about what was going to happen in Amazing Spider-Man #700, including the potential destruction of New York City, Peter Parker's death or his retirement from the superhero business. My favorite theory was that Peter Parker would choose a new superhero alter ego, allowing someone else to become Spider-Man.

It makes sense from a financial standpoint. Marvel gets more material with the best character in comics, in addition to an excuse to launch a new high-profile monthly. However, since Superior Spider-Man will remain a twice monthly title, it seems unlikely that there's going to be a new Peter Parker book. Although it's possible considering how many Marvel Now! titles have yet to be announced.

Developments in Amazing Spider-Man #695 have a lot of potential, fitting various scenarios. When it became public knowledge that Peter Parker made Spider-Man's weapons, this could provide an incentive for him to fake his death, especially after Doctor Octopus learns his secret identity. Or it could be the impetus for him to operate openly as a superhero, but just not Spider-Man.

A major reason I'm not bothered by the Superior Spider-Man rumors is that I'm fairly confident that it's temporary. After 30 or so issues, I suspect that Peter Parker would be back as Spidey. Or if he faked his death, he'll resume his old identity in dramatic fashion. If this hasn't happened, I would imagine that it's something that the writers could establish pretty quickly when the time comes.

But there will likely be some interesting stories before that happens. Just as there were interesting stories with Bucky as Captain America, and with Dick Grayson as Batman. Although the most successful version of that particular storyline may just have been Knightfall, which provided much of the basis for The Dark Knight Rises.

Whatever happens can add to the Spider-Man mythos in a postive way. The new Spider-Man, whoever he is, would have a higher profile, even when Peter Parker takes back the mantle. That's something that could continue to shake up the series in many different ways.

The alien costume saga is a precedent for how a development can have long-term consequences. While Peter Parker went back to the classic costume soon enough, he still occasionally dons the black and white suit. The primary significance of the storyline was the way it led to the creation of two of Spider-Man's best villains, one of whom has recently been successful as the lead of a superhero title.

If Peter Parker isn't the Superior Spider-Man, some readers are likely to be upset about the character hooking up with Mary Jane. Although I don't mind that. In One Moment in Time, Mary Jane expressed strong reasons for not wanting to date Spider-Man. So that's something Slott will have to address, although it doesn't seem too difficult. Mary Jane dating a Spider-Man who isn't Peter Parker is certainly a story we haven't seen before, and one that could only be done in the aftermath of One More Day.

There is a lot of short-term potential in Superior Spider-Man. And it can result in some interesting long-term developments. It can fit a commitment to change approach, but it can also be the type of shake-up an Illusion of Change approach requires every now and then.

Infinite Spider-Man 13.3: Blood On His Hands 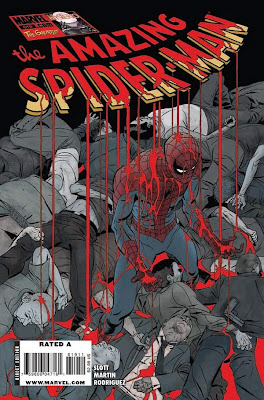 A final One More Day related fan theory is that Peter Parker has blood on his hands in the aftermath of his deal with a devil. One popular theory was that Mephisto has somehow gained Peter's soul, although the story suggests otherwise. Mephisto's previous characterization suggests that this was not a necessary motivation. This particular conclusion requires believing that a willingness to trade something you value for someone else's life can result in damnation, even if the person who wants to make the deal assures you that your soul is safe.

I've argued before that it was characteristic of Peter to sacrifice his marriage, considering how much he values life.  He would do everything possible to save someone who was injured (indirectly) because of his actions, For Peter to turn down the deal with Mephisto, he would have chosen his own happiness over the life of another, which doesn't strike me as responsible. Hell, the Ultimate Peter Parker was willing to die to save Aunt May.

Some readers suggested that foreseeable consequences of the deal with Mephisto reflect poorly on Peter Parker's morality. There were some questions about whether Mephisto was able to gain something else. Although it has yet to be established what that would be. In a CBR interview, Joe Quesada suggested that he had another story in mind, as a follow-up to One More Day and One Moment in Time, so it's possible that this would deal with the changed timeline.

In One Moment in Time, it was implied that Mephisto changed the past by freeing one of Electro's henchmen from Amazing Spider-Man Annual 21. So it's possible that Peter Parker could be blamed for anything bad that this guy did.


An interesting discussion came up at work today. One of the women who works here had unfortunately suffered a very late-term miscarriage a couple of months ago, and she was speaking about it for the first time. Much like my sister, who went through the same ordeal years ago, this woman and her husband consider themselves to have been parents. They had named their son, prepared a room for him, and spoke to him while he was still in the womb. All they have left are the memories of their child, and they will continue to love him throughout the remainder of their lives.It made me wonder - why didn't Peter and Mary Jane feel the same way? Why were they willing to trade their memories of Baby May for a temporary gain, to allow the devil to destroy their daughter's soul by erasing her very existence? Is Marvel editorial making a statement about the value of stillborn children?

What Omar says has to be taken with a grain of salt. He later blamed Marvel for upsetting his sister.


Well, I spoke with my sister over the weekend and brought up the idea of whether stillborn children have souls. She reacted VERY negatively to Spider-Man's choice, and in fact she hung up the phone abruptly while sobbing so hard I could barely make out what she was saying - something about her love for the child she lost. Needless to say, she was very upset - nice job, Marvel editors! - and she hasn't returned the calls I made yesterday or today.

So he's either staggeringly insensitive, or a troll. But if the latter is true, One More Day still gave him some material. Trolls do their best work if there's a weakness to exploit. 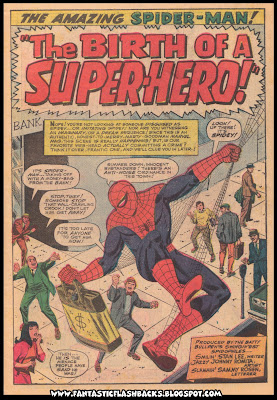 Going purely by the text, Peter & MJ loved their daughter. This was referenced in Spectacular Spider-Man #241. I guess they never considered what would happen to Baby May's soul during an intense 24 hour period. In the years since BND, this is something very few readers have posed. It always seems odd when readers think it's unrealistic that characters hadn't come to the same obscure conclusion they did with the benefit of hindsight.

The pregnancy was also a plot point which had essentially been quietly ignored. There wasn't even a reference to Peter and MJ's unborn child in JMS's entire run, although it was mentioned in Millar's Marvel Knights Spider-Man title at the same time.

Some readers think that Peter Parker should be held accountable for the nonexistence of the daughter who appeared towards the end of One More Day. By the same token, you could also argue that he killed several of his children by choosing to use contraception with his wife.

One More Day did have convoluted religious implications. Mephisto did explicitly say that he hoped that the deal would upset God. I don't know if it would fit Peter's character to choose God over someone else's life. In most cases in which someone sacrifices another person's life to make God happy, that guy's considered a psycho.

Aunt May probably would not have wanted Peter to take a deal. The best analogy I can think of is a guy still being heroic for jumping into a burning building to save another, despite being told to save himself. The story presented a case where either decision (saving Aunt May's life or choosing the marriage) would have worked for Peter. The question of whether the decision is moral is different from whether it was characteristic for Peter Parker. He is the type of guy who would save a life even if there are some indirect consequences. He'll rescue bystanders, even if it means that the supervillain gets to escape.