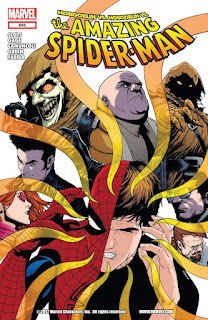 This seemingly fabulous issue ( after the last few bores ) begins with the Hobgoblin, raiding a Biker's bar filled with guys sporting the Green Goblin's tattoo. Hobgoblin is about the make away with a really valuable briefcase when Spider-Man comes in to stop him.

Spidey is all ready to take on the Hob Goblin, with new earpieces to block Hob's harmful screams. Hobgoblin however has also been preparing for Spider-Man. He gets Tiberius Stone, the spy from Horizon to turn on the Spider-Sense jammer. Something goes wrong on his part however, and Spider-Man's spider sense goes up a level, making him untouchable.

Hobgoblin makes a run for it, grabbing Stone with him. In a distance, Roderick Kingsley, the real Hobgoblin watches, planning his move.

Throughout the issue, we see Madame Web having a talk to her daughter, sending her daughter away for a while alone. It is implied that she thinks her time on earth is up, and she does not want her daughter to be around to see it.

Meanwhile, Peter Parker keeps the briefcase safely in his Spidey Vault, unable to open it as it is booby trapped. Not long later, Peter finds out some bad news that his "job"as Spider-Man's gadget inventor is going to be published on the headlines. " 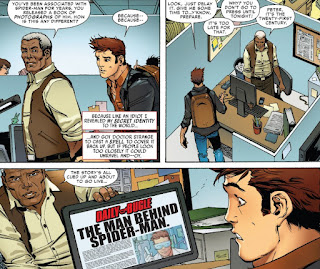 While trying to convince Robbie to take it off the press, Peter's Spider sense starts tingling when Phil Urich comes by with Norah. At the same time, the King Pin is trying to make a lesson of Tiberius Stone for screwing up. Stone begs for one more chance and the King Pin somehow agrees. Elsewhere, also taking place at the same time, Madame Web calls for 911, knowing that she's gonna need some medical attention soon.

Stone demonstrates to the King Pin his new adjustments to the Spider-Sense jammer. When he clicks it, Spider-Man's spider sense are enhanced a hundredfold and Peter immediately jumps to protect Norah and Phil, thinking danger is nearby. Pretty soon, everything around him is a potential threat and he starts going mad! 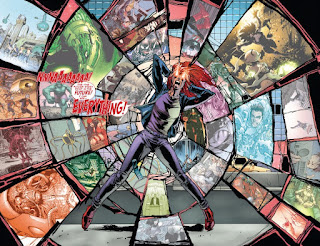 To make it worst, Madame Web is also having trouble as she can now see everything in the future. She appears to Peter in front of everyone, calling him Spider-Man, trying to warn him of something. This gets Phil curious, especially after seeing Peter run off frantically! Phil then gets a call from the King Pin asking him to complete a task. Phil states that it is already done!

He then chases after the disorientated Peter as the Hobgoblin and takes him out easily with a gas bomb, knowing fully well that Peter is Spider-Man.


Thoughts
This was a really good issue after having a lame story like Alpha for the last three issues. Several recent events have shown Peter's growing concern for his secret identity being exposed again, for a second time to the world!

In this issue however, it seems as though his big secret is going to be blown. Obviously the one thing that could save Peter might be the real Hobgoblin who will come kill this imposter before getting the chance to blurt out the news. Spider-Man comics can now go two ways - either get really interesting, and put Peter in the stickiest situation possible, or just go back to regular newspaper style comics where we all know that everything will work out fine in the end.

What do you think will happen?