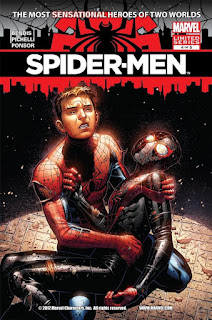 Here is a double up review for the rest of the Spider-Men mini, where Peter Parker meets Miles Morales of the Ultimate Universe.

The Story - Spider-Men 4
It starts exactly where we left off in issue number three. Peter Parker of our Universe visits Gwen Stacey and Aunt May of the Ultimate Universe. Shocked, Aunt May and Gwen start attacking Peter. Peter eventually tries to explain himself and Aunt May faints.

In the next scene, Tony Stark questions Nick Fury as to why he let Peter roam around freely. Fury states that he did so to clear his conscious on some promises he made to their Peter Parker who recently passed on.

We later see the Ultimate Universe MJ get a call from Gwen trying to explain whats going on about this mysterious older Peter.

When Aunt May finally awakens, she sees Miles, Gwen and Peter chatting in the living room, each learning a little about the other world. Everyone in the room shares a moment, including Aunt May when she learns that Peter grew up and is living his life based on Uncle Ben's famous words.

Later, SHIELD comes to pick Peter up and take him back to base. As Peter leaves however, he notices Mary Jane in a distance. Unfortunately, before he can say anything, she runs away. Back at the base, the Spider-Men, Nick Fury and Tony Stark figure out a way to pinpoint Mysterio's "hole in the wall" between worlds.

This issue starts with a really curious Mysterio in the 616 universe, who insists that he must see Peter Parker suffering in the ultimate universe. He opens the portal only to find Spider-Man and some of the Ultimates waiting for him. 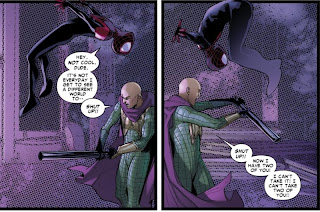 In the last panel we see Peter Parker, back at his home, googling Miles Morales. He is pretty shocked when he sees the results!

This story, though not carrying too much depth was really good and entertaining. One thing I can't get over with however is the fact that we will not be seeing Mysterio anymore in the 616 universe... since he's stuck in the Ultimate Universe now. NOO!

It was interesting to see Peter's conversation with Gwen and how he constantly avoided mentioning that she's dead in his universe.

I also forgot to mention that Miles gets Peter's blessing in being the new Spider-Man, which probably means a loooot to him! This story also leaves us all wondering who Miles Morales is in the 616 universe! While he may be a good black kid in the Ultimate Universe, I reckon he's some sort of white bad guy in 616..

Overall, this was a great read and highly recommended.