"The End of Alpha" pretty much sums this whole issue up. Recently the Spider-Man stories have been either really good, or really bad, and Alpha's story is an example of one of those that are really really bad .

The Story
It begins with good old Alpha touring the world. His parents now regret their irresponsibility in raising him and are trying to get him to come home. Unfortunately, they can't get a hold of him as he is roaming around Tokyo and can only be reached on his private cell number.

Peter call's him on his private cell, asking him to come in for a check up. However, Alpha responds saying he's too busy and will come in twice the following week. At this, Peter realizes that he has been in his lab for ages ( weeks I suppose). He also realizes that he is going to miss seeing his Aunt May off at the airport like he promised. As, Spider-Man, Peter tries to swing to the airport asap but is stopped by the Avengers stating that they have another world threatening danger at risk requiring his help. Apparently the world is being attacked by Terminus.

Captain America immediately asks Spider-Man to call Alpha for help. Spidey reluctantly agrees and before Alpha can finish saying "on my way" he's back in Manhattan. The Avenger's are amazed that he can now use two powers at once - Speed and flight. 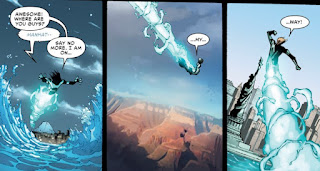 Alpha easily takes out Terminus, but not before causing some kind of ripples in the air, taking out air traffic control and causing harm to civilians. Anyhow, Spider-Man, with the help of Captain Marvel ( previously Ms Marvel ) gets to his aunt's plane and after a long series of events manages to help them land the plane safely. 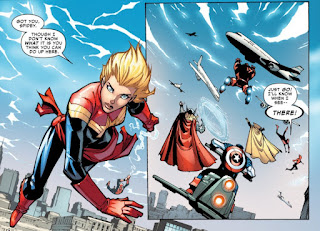 At the end of the battle, Alpha takes off and Spider-Man requests for the alien tech. The next day, Spider-Man calls Alpha in for a check up, and with the help of the alien tech manages to reduce Alpha's power significantly.

Andy is told that his power is still in him and will probably grow one day. However, he has to learn to mature and be responsible. He is also told that he can no longer use the name Alpha if he is to ever become a hero again.

We also find out that Aunt May may be partially crippled for life and, after the persuasion of her nephew will be moving back to New York.

In the epilogue, we see that the real Hobgoblin is back in town! 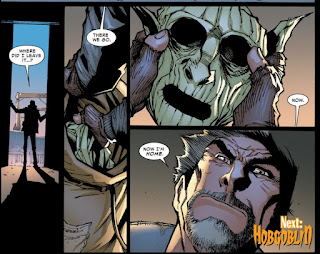 Unfortunately, the whole Alpha arc seemed like a waste of time to me. Spider-Man pretty much made a new future really powerful enemy by taking away Alpha's powers.. through deceit! That's gonna burn.

I have a feeling everything Peter has done in these last three issues is gonna bite him in the back pretty soon. Things like, missing for a few weeks in his lab ( he did mention that he's not sure if he's still on the FF), not picking up Aunt May's calls, missing them at the airport, not picking up Aunt May's death message call ( while in the plane), thought that was a lil hard as he was busy being Spider-Man saving their plane, and finally, tricking Alpha into losing his powers.

Personally I don't think Captain America for one will be too happy about them losing their most powerful good guy on the planet, especially since he entrusted the responsibility to teaching Alpha to be a real hero to Spider-Man.

The other thing I'd like to mention is that in these last three issues, we've had TWO major world threatening villains attack the world and get killed in a few pages. Kinda makes us think what the big deal about Wolrd War Hulk was all about some years ago!

That's all for now. Till the next hopefully ' on time ' review.