There's a One More Day related fan theory that comes up every now and then at CBR: Was Mary Jane pregnant? Anyone who came to that conclusion is going to have a different understanding of the story, as well as what Peter and MJ gave up, than the typical reader.

The final chapter of One More Day began with Mary Jane standing by a bathroom, shortly after Mephisto offered to save Aunt May's life in exchange for Peter Parker's marriage. Some readers came to the conclusion that Mary Jane was throwing up, although this is not explicitly stated at any point. 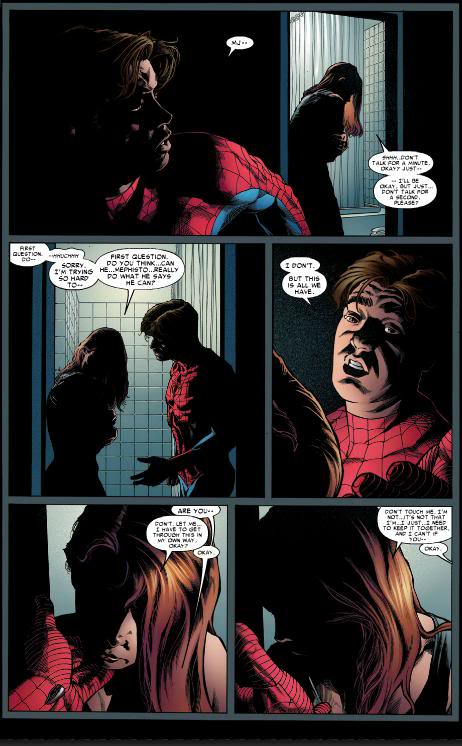 After Peter & Mary Jane accepted the deal, Mephisto gloated and showed them a vision of the daughter they would have made if they had just stayed married. 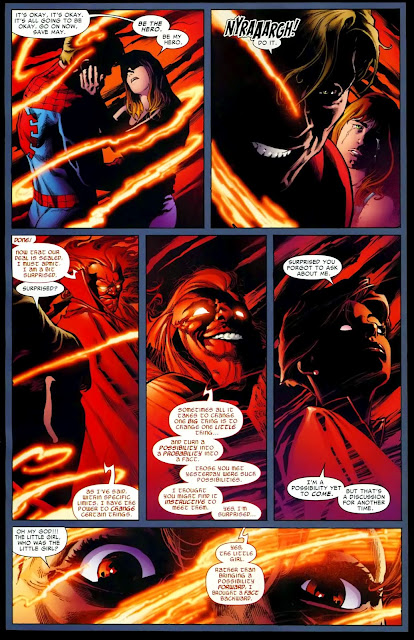 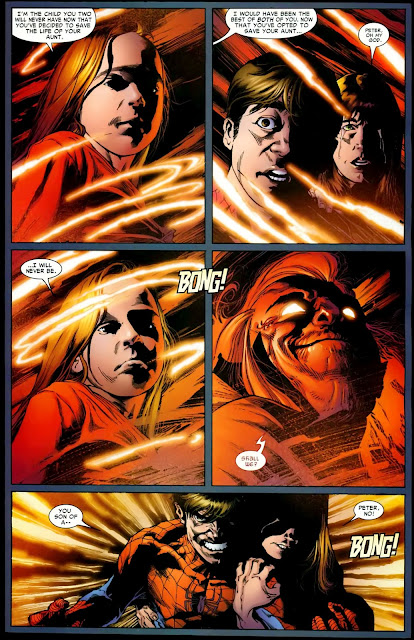 This was foreshadowed in the preceding chapter, in which Spider-Man met a cryptic little girl and a cross-dressing Mephisto. It may be an understatement to say that this foreshadowed the later scene, considering how obvious the dialogue is. It was pretty clear what JMS and Quesada were setting up, in a scene in which a little red-headed girl, described as a possibility Mephisto doesn't want to talk about yet, talks about her beautiful mother, and smart father. 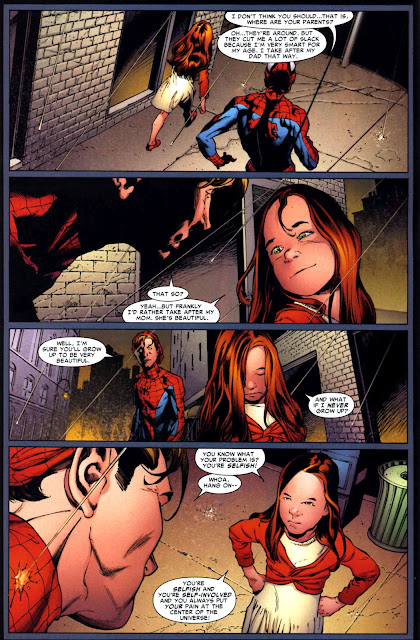 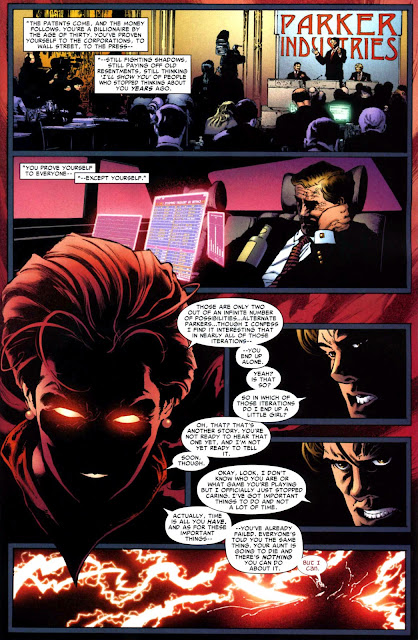 Comics is a medium which is heavily reliant on visual shorthand, and a young woman possibly throwing up is visual shorthand for morning sickness. And this is a story that ends with the revelation about the child Mary Jane could have had.

Rob Bricken of Topless Robot was clearly under the impression that this was a plot point. In his rundown of the worst non-Clone Saga Spider-Man stories, he summed up One More Day as Spider-man Sells His Pregnant Supermodel Wife to the Devil, He elaborates the point...


Around part three of One More Day, Peter starts having weird encounters with other-dimensional versions of himself that are wealthy but alone and miserable. They lead him to a little girl who bitches at him for being horrible and self-centered, and then takes him to Mephisto. Being the Devil and all, Mephisto promises he could save Aunt May, but only in exchange for the most valuable thing Peter has: his marriage! Mephisto then teleports Spider-man back to wherever the hell MJ is, and it turns out she got the same offer. MJ is having obvious morning sickness, but talks things out with Peter anyway. She decides giving their marriage to the devil is okay because, hey, they’ll probably find each other again (I read it as “we both know this shit won’t stand once there’s been a change in editorial”). Mephisto makes sure Peter knows that by making the deal he’s essentially giving Mary Jane a magical abortion and shows them the daughter he’ll never have, the little red-haired girl who yelled at him.

From the issue, there was no reference to the future child having already been conceived, something Mephisto would have enjoyed gloating about. Nor was there any indication that Mary Jane was aware of any pregnancy. She could easily have just been sick due to the stress of a difficult decision. An upset stomach has also become visual shorthand for that. She may also have just been sobbing, which people often do in difficult situations.

There isn't sufficient reason to conclude that she was pregnant. It seems pretty clear that this wasn't a result that the reader was intended to come to, considering how it was never clearly stated. If it was meant to be a plot point, it would have been easy enough to construct a few lines of dialogue making that explicit. Currently, for this fan theory to pan out,  the reader would have to connect several dots to understand something that seems to be rather important to the story.

That said, it's technically possible that MJ was expecting Spider-Man's baby. And it doesn't even matter what Marvel's planning at the moment. The next Editor-in-Chief and writer could always reveal that MJ was pregnant, even if that wasn't the intent of Quesada or JMS. Likewise, if Quesada and JMS intended to suggest that, chose to keep it vague, and decided to never to mention it in subsequent interviews, those plans could very easily change if the next creative teams decide that it's a topic that isn't worth addressing.

Peter & MJ were expecting a child during the Clone Saga, although that ended with either a stillbirth or Norman Osborn faking a stillbirth in order to steal his archenemy's baby. Some readers thought that the little girl Peter met in the alleyway was supposed to be Mayday Parker, and that the twist was supposed to be that Peter and MJ eliminated the daughter they didn't know was alive from existence.

There were a few well-documented delays on One More Day, and a last minute catastrophe as JMS decided to provide a script that was different from what had been commissioned. Quesada also mentioned how he had to change the dialogue for finished artwork and rewrite portions of JMS's script, which further complicates efforts to determine what's really going on in a given page. The fan theories neglect to take into account the problems inherent in conveying nuance in rushed work. When creative teams are in a hurry, they often won't realize how their work can be misinterpreted. A generation ago, this resulted in one fan theory that the wedding annual included a last minute fling between Mary Jane Watson and Bruce Wayne.

I don't think JMS and Quesada realized that when a character is introduced as Peter and Mary Jane's daughter, many readers will think it's meant to be Spider-Girl. There were no references to Mayday Parker during JMS's run, which was generally rather light on references to the work of earlier creative teams. In Amazing Spider-Man #500, a future version of Peter Parker revealed that he and Mary Jane were parents, but they had a son named Ben. It seems unlikely that JMS would have added a plot point which requires a familiarity with obscure periods of the Spider-Man comics in order for a reader to understand what's going on.

In interviews, Joe Quesada suggested that the clone saga pregnancy would not have happened if Peter & MJ weren't married. He made the point in response to a question about One More Day and Brand New Day.


Since the marriage was derailed, but so many stories hinge on these two living together, are you saying that Peter and Mary Jane were co-habitating? And that MJ almost had a baby out of wedlock, but (presumably) lost it? In the end, I still plan on enjoying 'Brand New Day,' but I'm curious as to what kind of history these two share now."


The question sort of answers itself when you quoted my saying that "almost" everything happened. The funny thing about the pregnancy issue is that Marvel at the time scrambled to derail the story as quickly as possible. I don't know exactly how that story got as far as it did, but they ultimately realized it was a huge mistake. So, taking that into consideration, I personally feel that that's one that didn't happen, chiefly because Peter and MJ now not having been married, would have taken proper precaution to avoid getting in the family way in the first place.
The truth of the matter is that we're committed to preserving as much of these stories as is humanly possible, but because the marriage is no more and now never was, there are going to be elements that have changed. It's inevitable. But we're striving to keep those ripple effects minor, and you can suss them out in most older stories if you just give it a moment's thought. So Jonathan Caeser stalked a single Mary Jane rather than a married Mary Jane, Norman Osborn and Venom once knew that Peter Parker was Spider-Man but forgot along with the rest of the world, and so on.

Look at it this way: Norman Osborn was dead for twenty years, and then was suddenly revealed to be alive. And that changed elements of all sorts of Spidey stories that had come before it, the entire Harry cycle, the stories where Harry's shrink becomes the Green Goblin, and the whole Hobgoblin cycle. But the details of how this could all work eventually got revealed, for good or ill, and today, nobody much questions the fact that Norman is back and never really died. What we're talking about here is the same kind of thing.

In the case of MJ's pregnancy, that storyline was itself created to end the marriage -- the creators involved only made MJ pregnant because they were planning to reveal that Ben Reilly was the real Peter Parker, and then have MJ and her clone-Pete ride off into the sunset and out of the series together. And it's an element that hasn't even been mentioned in "Amazing Spider-Man" in close to ten years, so it's not an omnipresent element that's suddenly being taken away. It was a turn down a bad road, and some of the creators even realized it at the time (which is why Mary Jane was pregnant for something like two years, as the creative teams struggled to figure out how to write themselves out of the corner they were suddenly in.) So that's an area where we maybe need to squint a little bit more in terms of overlooking it. Or, hey, you can chalk it all up to Mephisto's motivation of preventing Peter and Mary Jane's child from coming into the world.

This would mean that the Clone Saga happened slightly differently, although Ben Reilly still died, Kaine was still introduced and Norman Osborn revealed that he wasn't dead. In One Moment in Time, in which Quesada explained how Peter & MJ decided not to get married, Mary Jane revealed that, as far as she was concerned, the main reason to get married was to provide stability for children. As she had decided not to have children with Peter, she didn't see a point to getting hitched.

It's worth noting that the bathroom conversation occurred with different dialogue in the final issue of One Moment in Time. This version of Peter and MJ were explicitly not married. They were just on the verge of a break-up. 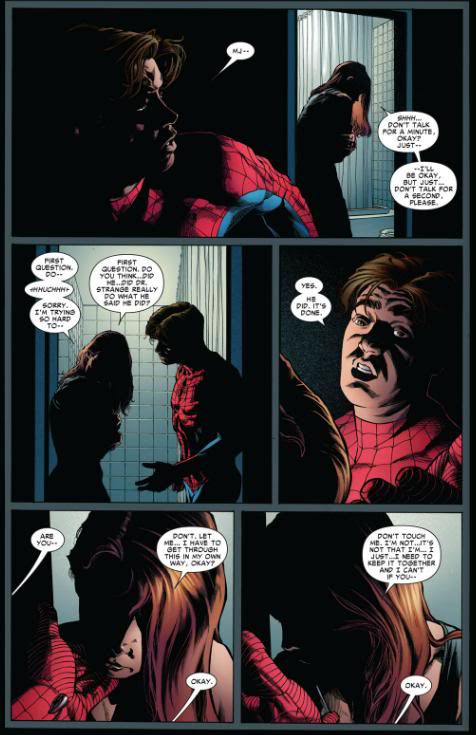 There's just as much evidence that she's suffering from "obvious morning sickness" in this scene, as there was for One More Day. I wouldn't be surprised to see fan theories in the future about what happened to Mary Jane during the gap between her appearances here and her later return to the books.

The idea's now out there. Technically, it's something a future writer could exploit, although it's probably not worth it. In previous entries, I've noted the problems with making Peter Parker a father. It would be too permanent a change to make what some readers inferred an official part of the character's history, just as it would be wrong for a writer to reveal just what Mary Jane was up to with the mysterious Bruce on the night before her wedding. To Joe Quesada's credit, he chose not to emphasize what was going on there when he revisited that night in One Moment in Time.

There's one final fan theory about One More Day to address. What does it mean for Peter Parker's immortal soul? And what does the deal with Mephisto say about his morals?