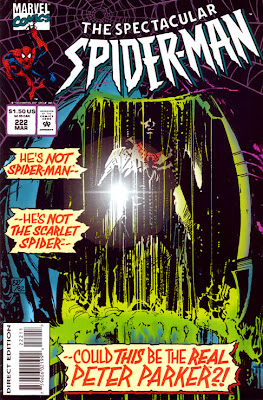 As an example of how pop culture has changed, even The Atlantic has a piece about their favorite television fan theories. The most interesting deliberations aren't about what's going to happen next, but about what has already happened. Superhero comics can be just as susceptible to this type of speculation with readers discussing their interpretations of stories, some devoting more time commentating on the suspicions of others than on reading the actual comic.

There are plenty of fan theories about One More Day, since it was a four part story which changed the most popular Marvel character's reality in significant ways. While the One Moment in Time storyline a few years later answered a few of the questions, there were still a few major details that were left up to the individual reader. And that resulted in several readers coming to some unusual conclusions, with a few deciding that the Spider-Man in Brand New Day is set in a different universe than the pre-OMD Spider-Man.

A refresher course may be in order. Within the context of the Marvel Universe, it's understood that there are thousands of coexisting realities. The regular Marvel Universe is referred to as Earth-616. That started as a parody of DC's decision to refer to the pre-Crisis DC Universe as Earth One, while the Golden Age DC Universe was Earth Two. The joke was that the world of the Marvel comics wasn't even one of the most important universes. Fans started using the designation as a way to compare the regular Marvel Universe to the Ultimate Universe, or to any alternate worlds. Some think that it's too much of an in-joke, a mannerism that can make Marvel comics seem unapproachable to new readers.

Tom Brevoort doesn't care for it.


I can tell you for sure that those of us actually working on the books virtually never use the term — and I kind of wince inside whenever I hear somebody use it. It just sounds so stupid to my ear, and so counter to the kind of mindset we try to foster in regard to the stories we create and the thinking we try to employ.

Neither does Joe Quesada.


I never use it, I hate the term pure and simple and agree with Tom’s assessment of it. I can’t remember ever hearing it in the office and only really see it used online for the most part. I think the term really came into vogue when the Ultimate Universe came into prominence, but in my world, the language and distinctions are simple, there is the Marvel Universe and the Ultimate Universe. Anything other than that reeks of all that DC Earth 1, Earth 2, Earth Prime stuff which I’ve never really taken to, but then again, I got into DC when they got rid of all that stuff so it was from and for a different era than my own.

So some readers took to referring the post-Brand New Day comics as occurring in Earth-617, or some variation thereof. A few One More Day detractors called it Earth-666, to signify Spider-Man's deal with Mephisto. Ironically enough, biblical scholars recently determined that the number of the beast is probably 616.

That leaves the question of whether this is the same Marvel Universe. The counterargument is that previous comics, including Karl Kesel's Fantastic Four one-shot Death in the Family, established that attempts at time travel usually just result in the creation of an alternate reality. In that case, if a hero goes back in time and changes the past, the present still remains the same, but there's a new parallel universe in which things went differently.
I don't think this was the case with the time manipulation in One More Day. Otherwise, the next page after this sequence would involve Peter and MJ wondering why nothing's changed.

Rules about time travel in the Marvel Universe are murky at best, often based on what works for a particular story. It's later been established that small events in the past can be changed, and that in those cases, the universe will correct itself.

At CBR, stewart48 summed up the tenuous nature of the 616 Marvel Universe, for anyone trying to argue that it should now be called something else.


Based on the Marvel rules of every potential choice has its own reality, 616 is just a term for the here and now of the Marvel U. Marvel U has probably been through different numbered universes with all the time travel storylines the x-men alone have been through.

Just wanted to blow your minds once again.

Dan Slott noted the inconsistencies with how it's been done in other Marvel comics.


Absolutely true. There are even times in the FF when Reed's "rule" doesn't apply-- and, if it did, the whole story would fall apart. (FF #352 is a good example of this.)

There have been countless examples throughout key Marvel stories and runs where time travel ACTUALLY occurs WITHOUT causing a parallel universe-- just as there have been times where it HAS. (MARVEL TWO-IN-ONE #50)

It really is pick-and-choose. Sorry that it's not so consistent. (Though, rule of thumb, it's USUALLY Doom's time machine that causes the alternate universe scenario... except for the few times it doesn't.)
For example, when the WCA had their big time-travel adventure (Did they use Doom's machine? I can't remember that part clearly.). In that story one of the WCA leaves a MESSAGE in the past knowing that their friends will find it in the present. That trick DOES NOT work at all with the alternate history rule.

So I don't think this particular fan theory pans out. But there's another one that has resulted in an interesting interpretation of the sacrifice the Parkers made.