It all starts with a random old lady seemingly getting a heart attack and dying. At this, a telepathic no name calls for his brother to "bring together the team."

We next see that this Telepathic no name is actually a friend of Spider-Man's whom, for some reason, Spider-Man is trying to ignore. The guy's name is Psi, and as much as he would like to try to help, he can't help himself from getting in Spider-Man's way of stopping the bad guys.

Psi reminds Spider-Man of the time they worked together in the Brooklyn avengers. Back then, Spidey was a nerd, constantly being picked on at school. As such, he thought it fun to join a team who he thought was attached to the Avengers. Psi asks Spider-Man for help as he suspects someone is out killing members of their former team.

Anyhow, the two oldest team members died, both above 80 years of age, and although everyone is thinking they may have died naturally of old age, Psi is convinced that an old enemy is killing them one at a time. Spider-Man doesn't buy into his theory, but he is stopped by Psi's brother - Fi. Fi asks Spider-Man to play along as he hasn't seen his brother so excited in ages.

Through the issue we find out the reason Spider-Man left the Brooklyn Avengers was because they were all too clumsy and unable to stop any real villains. He finally left when he decided that it was too dangerous for them to be playing hero, especially since they were incapable of properly fighting street villains. 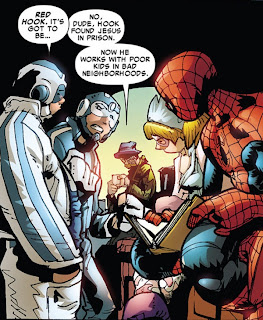 It was when the guns came out that Spider-Man decided this hero business was too dangerous for these guys.

The team visits Jerry Mander's who can hardly recognize the Brooklyn Avengers, save for Spider-Man of course. The team leaves disappointed and Spider-Man eventually tells Psi that there is no killer, and that his team mates died of old age. Psi leave disappointed and hurt. Unfortunately, Psi's dead body is later found with a red hook sticking out. At this point, no one can deny that someone really is killing the Brooklyn Avengers! 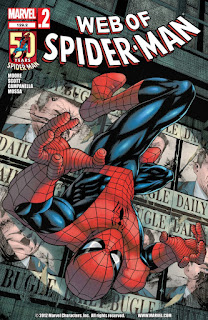 Spider-Man naturally blames himself for psi's death. Fi, being a telepath like his brother, was able to see that it was the Red Hook who committed the crime.

Spider-Man, Fi and the Hypster chase after the Red Hook while Paintball and Boiler go back to their apartment. ( see the image attached below if you're wondering who's who. ) Spidey and the team are attacked by the Red Hook when they jump him. They soon find out however that the Red Hook really did become good and that he only attacked because they jumped him.

Anyway, to cut this already really long review short, the Brooklyn Avengers eventually take out the real crook - their landlord, dressed as the Red Hook, who wanted them to move out ( or die) so he could sell his place to some new developer.

A memorial service is held for the deceased and Spider-Man bids his farewells.

Thoughts
All in all, I didn't find these issue too interesting. Sure it was fun to see some past bits of Spider-Man's life in Brooklyn. It was also interesting to see the Brooklyn Avengers take their Landlord out "Brooklyn Style"

However, there was no real attachment to the Brooklyn Avengers. I mean, even Spider-Man changes his phone number after telling them they can call him anytime!

While Spider-Man is portrayed to be a little snobbish at first, we soon realize that he had rather valid reasons for leaving them.

The art in both these issues were not really to my liking either. I found it hard to notice the Red Hook stuck in Psi's body!

Anyway, here's the spoiler filled review for those interested. 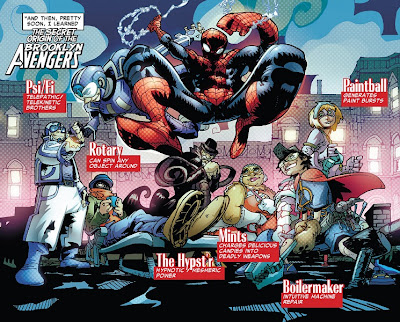