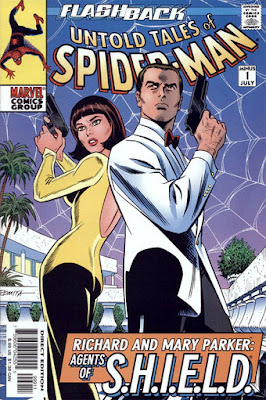 There are a few smaller decisions about Peter Parker's character that the next Spider-Man writers may touch on. Although it's just as easy to ignore it completely.

On his now-deleted formspring account, Dan Slott was asked about Spider-Man moments he disliked. He brought up the revelation from Parallel Lives that Mary Jane had always known who Spider-Man was, as well as Spider-Man's victory over Firelord from Amazing Spider-Man #270. But the cited one moment from the Silver Age.


When we found out that Peter Parker's parents were secretly spies.

Even though Stan "The Man" Lee came up with this, I'm not crazy about it (blasphemy, I know!). To me, Peter Parker is an "everyman." Yes he's was a super-genius kid from Queens... But chances are you've met or known a very clever person in your lifetime-- maybe even from Queens. But the second you add, "And his parents were secretly spies," to me THAT'S where Peter Parker's life stops being about "the world outside your window" and more about a crazy comic book character's adventures. Does that make sense?

I don't particularly care for that either, but as far as I can tell, there's really nothing that can be done about it. Spider-Man's parents are usually ignored, although the mystery about what happened to them became the central arc of Marc Webb's Amazing Spider-Man reboot. But any attempt to retcon this aspect of the comics is bound to be horribly convoluted.

As an aside, on CBR there is currently a boomlet of speculation that the major development in Amazing Spider-Man #700 may somehow involve Peter's parents. I doubt it's going to happen, but there is speculation about it.

Spider-Man should definitely be a Mets fan. There isn't any elaboration needed here.

The average comic book reader and comic book writer will have spent a lot of time consuming pop culture, so there is the temptation to include all sorts of reference to films, television and music from Peter Parker. I don't know if that's the right tack for Spider-Man. This is a guy who is going to be enormously busy, so I don't think he's spent a lot of time watching television or listening to music. He won't have time to read Rolling Stone and shop for albums.

So his musical references would consist of a few hit singles, stuff he liked before he was bitten by a radioactive spider and gifts from friends and family. I think his favorite TV shows would be those with self-contained episodes (The Simpsons, Law and Order) as opposed to longer intricate narratives (Breaking Bad, The Wire). There are probably quite a few films that he always meant to watch, but never got around to. He would feel the same way about books. The one thing he would find time for is science related stuff, although he would probably be a few weeks behind on NPR's Science Friday podcast and various magazines.

The debate about whether Spider-Man should have organic webbing or mechanical webbing seems to be settled. In the Raimi/ Maguire films, the webbing was just one of the many powers Peter Parker gained, like his spider-sense and ability to scale walls. Sam Raimi suggested that it was unrealistic for an ordinary teenager to develop such an impressive product, so his Peter Parker didn't invent mechanical webbing.

Spider-Man later gained organic webbing in the comics, and I considered whether it was hypocritical of former Marvel Editor in Chief Joe Quesada to support organic webbing while criticizing the spider-marriage. It was undone after One More Day, which isn't something fans seem upset about. Sometimes fans are bothered by the way no explanation has ever been provided, but I don't think that's a story worth telling at the moment. Perhaps if there's ever a sequel to One More Day, it could be touched on.

It has also been observed that the point that a biologically accurate version of organic webbing would be different from what we're used to. Artist Kerry Callen demonstrated this in a parody of the classic cover of Amazing Fantasy #15. 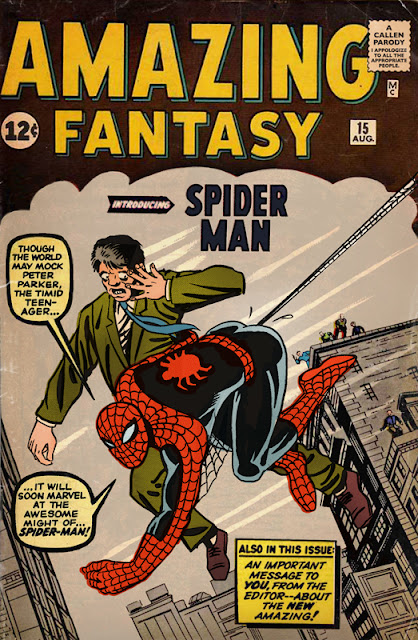 My last name is Mets, so I have selfish reasons for liking Paul Jenkins's take on Peter Parker as a fan of the New York Mets. But it's something that fits the character considering the team's complex reputation. I also like Peter associates the team with his Uncle Ben. He wasn't a fan of other teams or other sports as a child, and he wouldn't have the time to develop an interest after the spider bite.

One small thing that's bothered me is the occasional references to Peter Parker being a teetotaler who can't hold his liquor. It seems to me that the main reason for this to preserve the character as a role model for younger children. So he's the one character in comics who explicitly does not drink. But as most people do imbibe sometimes, it makes it slightly more difficult to relate to Peter Parker. And the option of getting the character drunk would be advantageous for the writers and the artists.

But for the most part, it's just something that can be ignored.