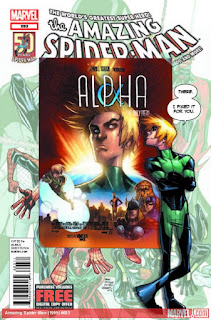 Once again, I am not really buying into this whole idea of Alpha, being an all powerful brat. This issue starts where Amazing Spider-Man 692 left off.

At this point, Spider-Man is really starting to hate this kid wonder he just created, not to mention that Spider-Man had just been labeled Alpha's sidekick by the press. Running out of ideas, he goes to MJ's club to seek her advice. MJ tell Peter that Alpha probably needs a role model in his life, like how Uncle Ben was to him. In the midst of their chat however, Peter realizes that Alpha does not have a mask, thus, exposing his alter ego to the public. Peter rushes off, leaving MJ behind, as usual.

The scene then switches to Chrissy, the girl Alpha used to like, and made out with in the last issue. Chrissy is on her way to visit her boyfriend and is really excited. Her good day takes a turn for the worst when she opens Alpha's room door, to see him making out with Paula Lake, the school cheer leader.

Chrissy leaves the house and the Macguire residence is once again visited by 'another fan' - Dr Warren and his little girl, Princess. This Dr Warren however is non other than Warren Miles aka the Jackal, ( probably a clone though) and his little girl is not really a girl.

Anyway, the Macguire family is kidnapped along with Alpha and the cheer leader girl. Apparently, Alpha is a real noob at using super powers and lost the fight immediately.

By the time Spider-Man reaches the scene, there is nothing but some organic webbing left at the house. (I forgot to mention that Dr Warrens 'daughter' was a creepy looking Spider girl)

Anyway, Peter has a short non essential scene with Aunt May later on and then sees Max Modell, requesting his help to create a tracking device to determine Alpha's location. Peter also tells Max that he wishes to leave Horizon Labs after this is all done, seeing that he has brought more bad to the company that good. Max assures him otherwise saying that he helped Spider-Man save the world and other stuff like that. 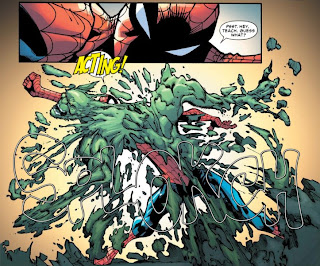 Pretty soon, Spider-Man has a tracking device and heads for Jackal's lab. He is greeted by the Jackals new 'girls,' and is eventually 'caught.' Spider-Man learns that Jackal is planning to clone Alpha, creating an army of super powered Alphas. Being a smart guy however, we later find out that he wasn't really caught, but instead pretended to be helpless so he could get to the Jackal and throw a hard punch in his face that makes him explode.

Unfortunately, as expected, the Jackal who exploded was just another clone. Spider-Man is unable to stop the cloning process and pretty soon, the Jackal has four or five Andy Macguire's. Luckily, Alpha's powers were not part of his DNA, thus resulting in his clones just being ordinary humans. This results in the Jackal reverting to Plan B which includes, his spider girl things eating the hostages, while he harvests the Alpha energy from Andy.

Spider-Man, knowing that the energy can't be harvested without killing him does his best to motivate Alpha to get free ( he's trapped in something), while fighting off the spider girl things. Alpha however doesn't need Spider-Man's motivational talk however as his fear of losing the power is strong enough to break himself free. Once, free, Andy kills his helpless clones, hating the fact that he used to be like them, without any power and useless.

Spider-Man is shocked at what Alpha did, but the Jackal soon diverts his attention a big red button he presses which instantly blows all the clones in pieces.

Anyway, by the end of this issue, Andy decides that he doesn't need Spider-Man and instead decides to go solo - Tony Stark Style. We next see him in some mansion making out with some supermodel whose picture he has all over his room.

After staying in his lab for a few days, Peter is also visited in his lab by a supermodel - Mary Jane Watson, who brings him some food and asks him what he's been working on. Peter tells her how he tricked Alpha into thinking that there might be a spot for him on the Avengers if he constantly comes for tests. What he doesn't know is that there is no space for him on the Avengers and that Peter is secretly working on a way to take away Alpha's powers.

MJ's question's Peter's actions asking if it is his place to say that Andy is not worthy of the power...

Thoughts
Honestly, the one thought going through my head right now is... " That's a really long summary! " This issue is a little longer than usual, which is good. I liked seeing Mary Jane appear several times in this issue, giving some useful advice.

Throughout this issue, Peter was trying to be an 'Uncle Ben' or 'Captain Stacey' to Andy. Andy's attitude however was a little too much for Peter to handle. Probably the most disappointing part for him was when he was trying to motivate Andy to break free by telling him to think about the people he loves. All Andy did however, was think about himself and how he would be useless without his powers. Seeing Andy break free with these thoughts alone pretty much tells a whole lot about the kid's character.

Lots of people on the comic boards are pointing out how Alpha is moving through girls faster than the Human Torch! This is pretty true. I think Andy's whole story and character is being rushed, being paced little too fast. At this rate, I will not be surprised if Andy's story will end in the next few issues.