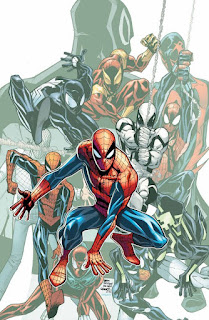 Based on a little something I read a while ago, it appears that Peter is now in his 30's as of this issue. As such, I suppose its now fine to age the character a little and give him a sidekick - Alpha.

I wasn't too excited about this sidekick, but I won't judge the character too soon.

The Story
In this issue, we are introduced to a new nobody - Andy Macguire. Andy is pretty much an invisible guy in his school. No one notices him. Unlike Peter however, he's not a brilliant nerd, neither is he a cool guy people would want to hang out with.

Anyway, one day he goes to a school trip to Horizon Labs where Peter tries to show off his new tech he just built. Somehow something goes wrong and Andy is zapped with some kinda electrical charge that turns him into a superhero.

I know, it sounds a little lame, but it's just an introduction to the kid. ( Being bitten by a spider is really not all that cool either )

Peter is eventually given the task of creating a costume and some gadgets for the kid, just like he 'does' for Spider-Man. Unlike, Peter however, this lil guy seems to be abusing his powers big time - showing off, using it to get girls, pushing the bigger guys around and etc. Spider-Man watches from a distance to see what it is exactly he has created. 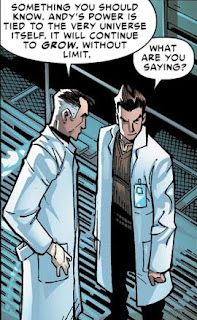 Anyway, Mr Fantastic explains that this kid currently contains Alpha Level Powers or powers that have the potential to reach an Omega Level ( like Hulk or Phoenix) Essentially, this kid is really powerful.

We see Peter and MJ making a visit to Aunt May and her husband somewhere along the lines. Peter can't seem to pay attention though as his mind is fixed on Andy. MJ eventually has a little chat with Peter after Aunt May and JJ Sr leave.

Peter then leaves to look for Andy, who is busy looking for crime to fight after seeing that people online think he's a loser, and not a real hero. Andy bumps into Spider-Man, who then tells him that he will take him in as a sidekick, to teach him some things about being a hero.

Anyway, after one night of training, Spider-Man tells Alpha/ Andy to stay put as he had just received a call from the FF about a mega threat. Andy is told to stay put. To cut it all short, the FF and Spider-Man are having a slight problem when all of the sudden Alpha appears, steals the Thing's "clobbering time" catchphrase and takes the bad guy out with one punch.

In the epilogue, we see the jackal observing everything that is taking place, and preparing his next move.

It was overall a really dull issue. What I probably enjoyed the most from this issue was seeing the Jackal again. Somehow, I don't see this Alpha character sticking. Something tell's me he's gonna die, or probably become a villain of some sort. He may also loose his powers pretty soon.

All in, this Alpha kid just does not fit in too well here. I mean, what is he doing in this book? He doesn't even have a single Spider power!