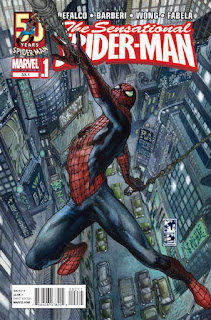 Here it is, the double up review of the Sensational Spider-Man 33.1 and 33.2, before I get started on ASM 692. If there's one thing that I can't stop thinking about in this issue, its Carlie, and how she somehow transformed into this rather shapely supermodel figure. Seriously, this character has really evolved physically since she was first introduced.

The Story - Monsters Part 1 ( SSM 33.1)
This issue takes place soon after Mayor Jameson is elected as Mayor. It all starts with Spider-Man fighting the Red Vulture ( the new one) While fighting, the vulture cuts down a container of illegal immigrants, women, looking for work, caught in a human trafficking mess.

Carlie, who was on the scene thinks the Vulture is somehow tied to it, though Spider-Man mentions that it isn't his style. Throughout this issue, Carlie is trying to get to the bottom of this case, thinking it might be her ticket to becoming a detective. She is stopped by an FBI agent and his partner, Special agent Charles Devonshire and Special agent Vito Casio, and is told to let go of the case. At this point, after watching a fair amount of police movies, you could probably figure out who the bad guy is. ;) Obviously, our girl does not listen and soon risks losing her badge. 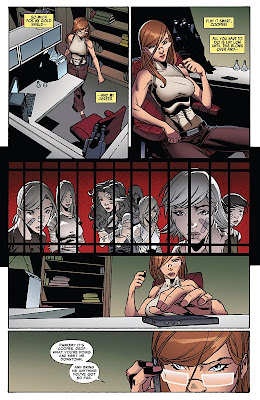 In this issue, we see a fair bit of Carlie working closely with both Peter and Spider-Man. As far as I can remember, I don't think Carlie knows at this point that they are both the same person. Peter eventually keys Carlie in on who the big boss behind it all is - a Mir Vorski. What Carlie doesn't know is that this Big Boss, is also closing in on her, and has hired someone to take her out.

Fortunately, Spidey manages to catch the hired thug before he can harm Carlie. The Red Vulture however, working independently has other plans for Carlie as well, trying to get her off his own tail. This issue ends with Carlie being swept off her feet by the Red Vulture.

In this issue, we have the Vulture asking Carlie why she is hunting him. After explaining about the women and children, the vulture explains how he is not involved in the scene below.

He then drops her in mid air after seeing Spider-Man pursuing him, but not before giving Carlie a number to call for answers. After Spider-Man saves the falling Carlie, he goes back to his now webbed victim ( the first guy who was trying to hunt Carlie) looking for answers.

Spider-Man eventually catches Agent Devonshire doing some dodgy stuff on camera. As Peter, he brings it to Carlie. Carlie informs Devonshire's partner of what he's been up to. His partner Agent Casio listens to what Carlie has to say. 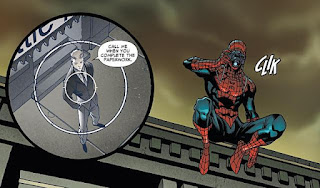 The next day, Carlie finds out that the bad guys won and got away scot free with $5million in cash. ( its a long story) Dissapointed, Carlie calls Peter out for a drink. Unfortunately for Mr Vorski however, he isn't as happy when we sees the Vulture in his office with a tied up Agent Devonshire, clearly beaten for information.

Moral of this story: The bad guys win, but they don't really win.

Thoughts
This issue was really a Carlie issue, featuring Spider-Man. Sure, Spider-Man had about 40% screen time in the issue, but this story was more about Carlie and the corrupted police force. I'm not entirely sure why the bad guys won, but I guess the main message in these two issues was that Carlie is a like-able character, not to mention a good cop ( in case you didn't already know ).

I like that they brought the Red Vulture back into the picture. We haven't seen a story with him in it for a while now. As for the art, I thought Barberi did a pretty decent job with the art work here.