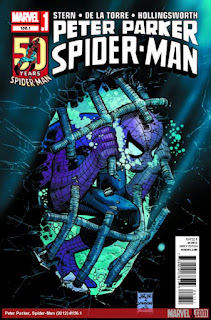 This issue pretty much recaps the significance of Uncle Ben in Peter Parker's life. While the story may not be so necessary to continuity, it does keep the reader interested.


The Story
The story starts with Spider-Man rushing to keep his appointment with Norah Winters, his former colleague. Apparently she thinks she's on to something and needs Peter's help. Peter agrees since he technically owes Norah for helping him out financially before. ( sort of )

Norah asks Peter to be her photographer and takes him to the ACME building - the place of Uncle Ben's death. Peter escorts her into the building but stops when his Spider-Sense starts tingling. They are stopped by a security guard whom Peter recognizes as a security guard for the Brand Cooperation ( some guys who caused trouble in the past ). Before Norah can try to sweet talk her way in, Peter pulls her aside and says they should get moving.

Norah isn't too impressed, and is in fact annoyed that Peter wussed out on her. Back at her office, the Daily Bugle, Jonah tells Norah that the ACME building is where Peter's Uncle was killed.

Spider-Man, somewhat curious as to why his Spider sense went off when there was only one security guard,  heads back to the ACME building. This time he snoops around, recalling the night he found the crook who killed his uncle. Spider-Man eventually finds the guard with another guy.

It doesn't take long to figure out what is going on. The Brand Cooperation is busy exploiting Spanish workers down some tunnels to do their dirty work. Spider-Man tries to save them and warn them of an incoming flood, which he found out from the Security guard who just didn't care.

Anyway, the building collapses as a result of an explosion, but no one is hurt thanks to Spider-Man. Spidey then tells the illegal Spanish workers to contact his friends Matt Murdock to settle their legal problems. 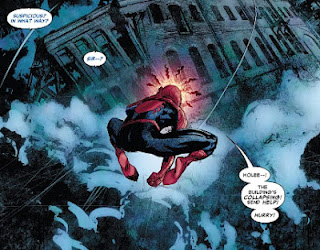 In conclusion, Mayor Jameson states that he will rebuild the former ACME building into something else memorable. Norah also apologizes to Peter after finding out about his uncle. As expected, this issue ends with Peter talking to Uncle Ben in his subconscious, assuring him that he is trying to use his Great powers with Great responsibility.

Thoughts
As you can probably figure out for yourself, the story here was not all that great. Just another Spider-Man adventure with zero importance to continuity. It really might as well be a cartoon series episode. However, being a 50th anniversary issue, I suppose this story would be relevant, reinstating the importance of Uncle Ben to Spider-Man comics, not to mention, the Great Power and Great Responsibility part.

I suppose if there's anything this issue does, it's reminding the readers that the Brand Cooperation still exists and is busy planning a little something that just might come up in the issues ahead.

For those who don't know anything about the Brand Cooperation, here's a brief recap. (Click to enlarge) 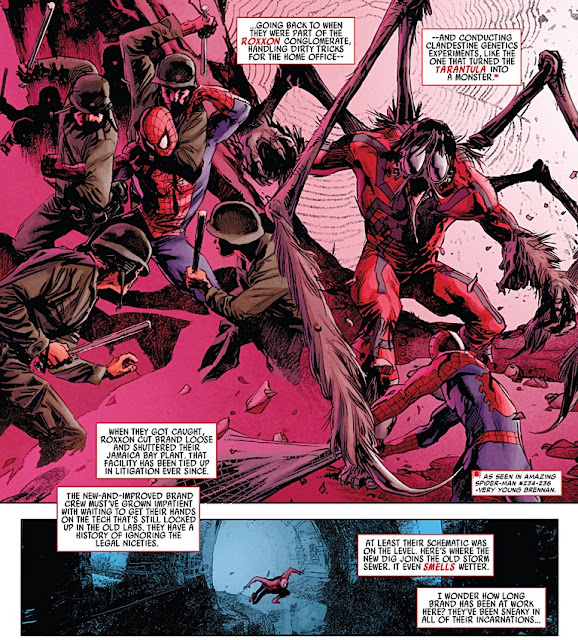