Ty Templeton joins Dan Slott for the conclusion of Ends of the Earth! 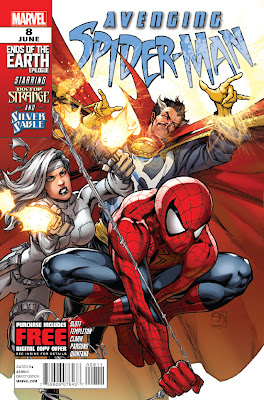 Spider-Man desperately searches for Silver Sable's body in the remains of Doctor Octopus' underwater base before being called up by Captain America, who informs him that his oxygen supply is about to run out.  Cap orders Spidey to help escort Doctor Octopus over to the Raft.  While heading to the Raft, Spidey recounts an adventure he had with Sable that made him realize how special she was:

After stopping a mugging in Times Square, Spidey spots a coded message from Silver Sable on the jumbotron asking him to meet her at the docks.  When he arrives, he gets into a limo with Sable, Doctor Strange and the Princess of Symkaria.  Sable and Strange explain that the Princess is set to marry Doctor Doom against her will.  Doom desires the Princess because she is the seventh daughter of a seventh daughter, and thus has the potential to give birth to the next sorcerer supreme or to become one herself.  Strange explains that to prevent Doom from exploiting her, the Princess must marry someone she genuinely loves.  Since the Princess has had a crush on Spider-Man since she was a girl, Sable asks Spidey to marry her.  Before Spider-Man can give an answer, the limo is attacked by Doctor Doom.  Before Doom can get the Princess, Strange is able to cast a teleportation spell, sending the Princess and the heroes across town.

The Princess, unimpressed with Spider-Man's showing against Doom, reveals that she has been in love with a pastry boy in the royal kitchen named Marek since she was sixteen.  Spider-Man volunteers to go get Marek (who lives in New York) and bring him to the embassy.  Spider-Man gets Marek to the embassy without trouble, and the wedding immediately starts.  Doom arrives during the ceremony, and Spider-Man has no luck in holding him off.  Sable however, is able to stall Doom just long enough for Marek and the Princess to "consummate" their marriage.  With the Princess no longer of any use to him, Doom flees, leaving Spider-Man to marvel at Sable's bravery and willingness to put her life on the line for love.

After Doc Ock is brought to his cell, Spider-Man informs him that the scientists at Horizon easily managed to override the tech in his satellites, meaning they never could have worked, and thus he hasn't left any legacy for the world to remember him by.  Meanwhile, as Black Widow and a team of divers continue to look for Sable, a lone octobot stalks the ocean floor...

This issue functioned both as an effective epilogue to Ends of the Earth while at the same time delivering a fun team up that Avenging Spider-Man readers are now accustomed to.  Ty Templeton and Dan Slott deliver a nice tribute to Silver Sable here, though with no body being found, I doubt it'll be long before her or the Rhino show up again.  Ends of the Earth as a whole ultimately proved to be disappointing (globetrotting Spidey just isn't my thing), and although this was one of the more entertaining chapters of the storyline, I'm glad it's in the rearview mirror.