A new day, a new arc, what will Kaine get himself wrapped up in this time?
Let’s proceed.

Story:  Scene 1: Off the gulf of Mexico there was a disaster that occurred while Roxxon corp. was drilling for oil…more on that later (later as in not this review)

It’s a very hot day in Texas and Kaine is no doubt feelin the heat as he patrols the city in his costume.  All of a sudden, KablAmmO !  There’s a big explosion from a building and tons of flaming debris comes falling down, about to hit the citizens below.
Kaine uses a web net to catch the debris but, a then a woman comes dropping down from the sky right into his accepting arms. Is it love at first sight?  No just the passion of the moment, and her relief from being saved as the two share an intimate kiss. Which leads to them getting in bed together. (You wonder why this type of thing doesn’t happen to Spider-Man? Well the title does say “None of the Responsibility”)

Anyway, after the sex, Kaine finds out that this woman actually caused the explosion, and rather than hang around and ask questions, Kaine does what most men probably would do; He gets the heck outta there. Kaine jumps right out the window.

He tries to shake off the whole sleeping with the enemy experience, but to no avail. Aracely forces him to clear his conscience. So he goes out night prowling, only to find that the girl’s apartment is completely empty. He seeks out his good buddy, Officer Wally Layton to ask him about Roxxon / Galveston explosion. According to Roxxon oil corp., it was due to a gas leak, but Kaine knows better and heads to Roxxon for further info. 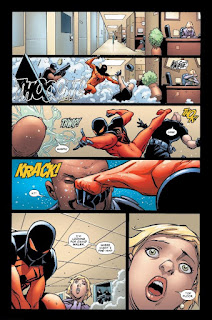 Kaine forces his way up to CEO of Roxxon, David Walsh. It is there that he is reintroduced to his daughter Zoe, the woman Kaine slept with just recently. Mr. Walsh explains to Kaine that he had to cover up the explosion by saying it was a gas leak to prevent himself and his company embarrassment and avoid having his daughter sent to prison for her assault on the company.

Kaine persists but is then interrupted by a group of estranged super heroes know as “the Rangers” ( No, not the baseball team, and not the MMPRs either. )

We’re headed for a showdown.  To Be Continued.

Review: Well that wasn’t exactly what I expected. With all the possibilities left over from last issue, things could have gone in a number of more interesting directions; however what we get is something totally alternative. Ehh whatever.

This couldn’t have been Kane’s first time with a woman, could it?
There’s nothing like casual sex to stir the plot. I say sarcastically.

Oil is no doubt a big industry and topic in Texas, so naturally writing about an oil controversy makes sense, but having a super hero team that actually calls themselves the Rangers is a bit cliché and buffoonery.  But, go ahead and have a guy dressed like the lone ranger get into it with Kaine, why not?  Because it’s a little tacky, that’s why.

Kaine mentions how he’s been dead in the past and he prefers living. ( A reference to what happened to him after Grim Hunt and before Spider Island, which confirms that he was somehow conscious enough during the experience to remember it. Maybe spiritually.)

At 1 point Kaine also says how he wishes he still had his Spider sense. ( Did I miss something? I could have sworn he’s been using it this whole series.)

But what really bothers me is that with so many other pressing issues in Kane’s life, How are we as readers supposed to care about what’s happening with Roxxon oil?

I don’t know what else to say about this issue. Just disappointed.
Read More
Newer Posts Older Posts Home