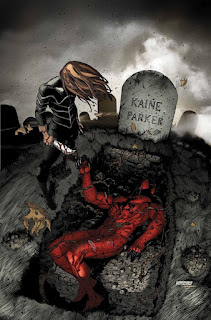 When last we saw our reluctant hero, he was saving the city of Houston from a nuclear bomb threat, so it makes perfect sense that in this issue the Scarlet Spider is the hottest buzz about the city. Everyone seems to be obsessing and singing his praises, meanwhile Kaine is having his arm tattooed. The female tattoo artist is going on about her little experience meeting the man in red.

Just outside the tattoo shop, Kaine is being stalked by not one but two women. The first is the little young lady known as Aracelly (yes, the same girl that’s been staying with Kaine the whole series.) She was able to track down Kaine based on her strange psychic connection with him.
The 2nd stalker is another little young lady with hair of gold and a knife in her pocket. The mysterious blonde remains unseen by the other two.

Aracelly convinces Kaine to take her to a BBQ joint, where she gets busy stuffing her face and making personal comments about Kaine, thus angering him. Despite Kaine’s line of questioning, Aracelly is still unable to remember her past, or the reason she has a psychic connection with him.
Aracelly mentions that she wants to them to go to a concert, which brings the conversation to Annabelle.

Just in case you forgot, Annabelle is the bartender Kaine met, and delegated her to look after Aracelly while he is busy.  Aracelly and Kaine, meet up with Annabelle at a concert and Kaine is admiring Annabelle when loe and behold, the blonde stalker emerges from the shadows to confront Kaine. He immediately recognizes her; Ana Kravinoff. 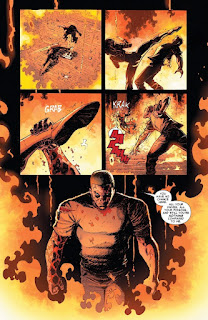 The fight ensues. Kaine has vengeance against her for what she did in “Amazing Spider-Man Grim Hunt” Kaine holds his own very well despite being poisoned and bare handed. Just as the ceiling is about to crash down on her Kaine makes a last second save.
She calls him weak and warns him that her father is going to come after him. Kaine leaves before the poison completely paralyses him.

The next scene is a bit of a touching moment when Kaine tells Annabelle to leave him before she gets hurt, but she won’t because she cares too much about him.

Elsewhere, at a Fed. Detainment center, a mysterious man and his wolves has come to set a certain maniacal villain free. He tells the captive that he is needed back at home. The man being detained is the Salamander (from issue 2) and he wants revenge on Scarlet.
However, the elder man retorts that his wolves will deal with the Spider.

And some where else, Julia Carpenter aka Madame Web is having a major psychic spasm, exclaiming,” She’s coming back, She’s coming for Kaine!”

And at yet another undisclosed location, Sergei Kravinoff is getting the debriefing from his daughter about her encounter with Kaine. She tells him he’s pretending to be a hero and it’s made him soft. Kraven informs her that they have more hunting to do.

Thoughts
Issue six gives us plenty of good content and lots to look forward to. This issue really moves the plot forward and opens doors for other big plots to develop.

Ryan Stegman is back! but unfortunately only for this issue. What a tease.  So naturally the art looks stunning. 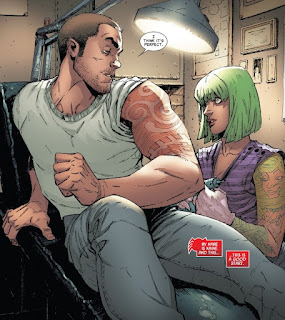 Story wise, I really like what I’m reading. Kaine is truly painting the town red. I like the idea of Kaine getting a tattoo, and people requesting the scarlet spider symbol as their tat.

I believe Yost is having fun playing around with the idea of Kaine having a psychic buddy, kind of like the personification of his conscience following him around. To top that off, and really drive that point home, Aracelly is wearing the infamous blue hoddie! The very trademark of the original scarlet spidey and the guy Kaine refers to as his brother.

Therefore, Aracelly in some way represents all of that, and maybe even has a deeper tie in with Kaine’s past. This is all a very good thing for us readers and the plot because #1, it gives Kaine someone to have rapport with ( the story wouldn’t be interesting if he were a recluse) #2 She is young and female, so it emphasizes the fact that Kaine feels a sense of  responsibility to protect her. # 3 It provides mystery and intrigue about her character’s origin. (Why does she share a psychic link with Kaine?) #4. Kaine can’t hide anything from her so it’s almost like we have direct access to his true thoughts, instead of just what he decides to tell people or his narration.

I think writer Chris Yost is emphasizing the fact that Kaine can’t get rid of the people in his life no matter how much he warns them, scolds them, or wishes they would leave ; they realize he needs them, and rightfully so.

So this time Kaine has a brawl with Ana Kravinoff. It seems like this was inevitable, seeing as how “grim hunt” was so memorable and of course Kaine would want revenge for being killed.  I love seeing Kaine pissed off and splattered with blood, he really looks psycho cool. Lots of quality action frames.

Now on to the preludes. Yost includes four epilogues or previews to upcoming stories.
The first involves Kaine going to visit a priest. Kaine says he feels guilty for his past and wonders why he wasn’t punished by God with death. The priest suggests confession.

The 2nd involves the releasing of the villain, Salamander by a mysterious benefactor.
This is very important and overdue, because the Salamander links with Aracelly’s character, so most likely we can look forward to some more insight there.

The third is yet another incident of Madame web freaking out. But what does it mean that SHE is coming for Kaine, who is She?  If you have been paying attention since the beginning of this series, you should have a pretty good idea. (More on that later)

Then that leaves Kraven. Back from his battle with Venom in the Savage land, He’s set his target on Kaine, but why?  This is pretty epic; a major Spider-Man villain is after Kaine, not some 2nd rate clown like Jack O’Lantern. A real top tier villain of the Spidey universe, and he’s got backup.

So the big question is, who will strike first? I absolutely cannot wait.
I give this issue a 9 out of 10.
Read More
Newer Posts Older Posts Home