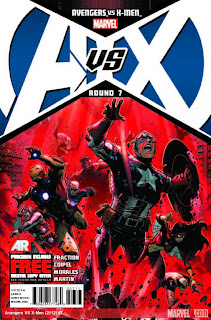 Just to summarize, so everybody knows what is going on here. The Avengers and X-Men are fighting. In the last issue, a powered up Cyclops has decided that there will be no more Avengers.

The Story
This issue starts with Cyclops furious that the Scarlet Witch has aided the Avengers and helped them teleport away. It is not long however before they are found. A big fight takes place and Hawekeye gets fried, literally ( but has not died). Instead, he is kept captive, barely alive. When the Avengers finally manage an escape, Captain America is no pleased.

Stark explains that the Avengers left the scene too soon and that he needed a little more time to analyze the newly separated phoenix force. Iron man separated the phoenix force in the last few issues, thus powering up 5 of the X-Men, including Cyclops. 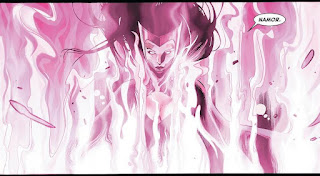 The Avengers agree that the only thing the X-Men are afraid of is the Scarlet Witch. As such they devise an illusion to make it seem that she is with both teams of Avenger's at once, for safety reasons. Very soon we have another fight scene, in two different places at once, both with Scarlet Witch present at the same time.

The X-Men are a little confused and Transonic evaporates ( or something along those lines). Strangely, like Hawkeye, we find that she did not die, but is somehow taken hostage by the Avengers.

In the meantime, the Avenger's have a new plan to all hide in another world called K'un L'un that Iron Fist knows more about. There Hope will be trained properly and the X-Men will not be able to find them. Tony also find's out that Hope and Logan are already there.

Just as the Avenger's prepare to leave, they are attacked by a furious Namor, who, with the help of Emma Frost, went behind Cyclop's back and prepared to start a war.


Thoughts
I'm not much of a X-Men guy, but almost every time I read an issue with Emma Frost in it, I get the feeling she's some kinda slut. I'm not sure if it is the Phoenix force causing her to go behind's Cyclops and starting something with Namor, or if that's really her in her own mind.

So far, looks like the Avenger's are getting their asses handed to them, though I can't shake the feeling that they are gonna win this war hands down. 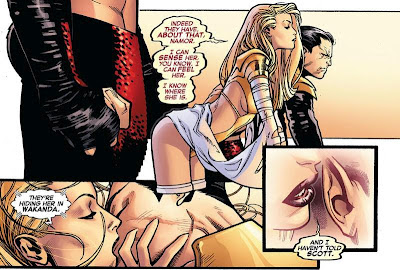