Best Spider-Man Stories #3: Nothing Can Stop the Juggernaut 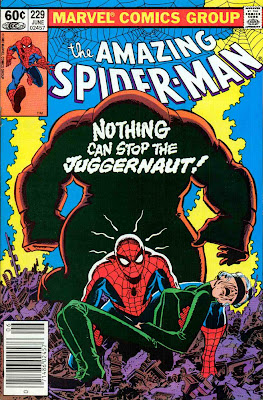 What Happened: Black Tom Cassady sends the Juggernaut to kidnap Madame Web, when Spidey shows up to try and stop that which is unstoppable.

Why It's In The Top 50: Mister Mets remembers reading the story in school.

I remember reading this comic in Middle School, and some of my classmates thought it was ridiculous. They remembered Juggernaut from the X-Men cartoon, and felt that Spider-Man didn't have a shot. And I realized that was the point of the story.

If you've never read the story, you would imagine that it was a very one-sided battle, and you'd be pretty much right. This is two issues of Spider-Man doing whatever he can to hurt the Juggernaut, and for the most part failing. It's also the best Spider-Man battle ever done, and I notice echoes of it everywhere from Spider-Man's first battle with Morlun (Amazing Spider-Man Volume 2 #32-33) to a battle between the Flash, and Gorilla Grodd (Flash #193-194.)

The story's simple. The crippled psychic Madame Web has a dream in which a gargantuan monster emerges from the water, so she calls Peter Parker for help. And I just love Peter's reaction to it all, such as his fears that he's fighting Namor, or making a little joke that a supervillain's found out who he is, and is calling his home, and then picking up the phone, and hearing "Spider-Man." The eventual battle will prove Spider-Man's determination, and refusal to surrender, right until the end. And a lot of things get destroyed, from a construction site to a gas tanker to a few doors.

Jesse describes why he chose this story.

I think this story truely highlights Spider-Man as the guy that can overcome anything. Stern decided to throw the gauntlet at Spidey, by really staking the odds against him and having him always find a way. Its that type of writing that solidified Spider-Man being in a class above the rest. Sure he's not the strongest, the fastest, or even the smartest, but his combination of will power and resiliency wins the day.

The Juggernaut story is a prime example of this. 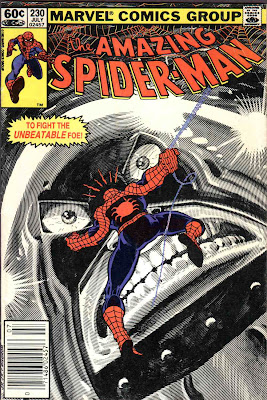 What the pros say: In an interview with Fred Hembeck for Fantaco's Chronicles #5, Roger Stern explained his preference for villains like Juggernaut.


Well, for one thing, we've seen Spider-Man fight Dr. Octopus 10,000 times and people shouldn't see Dr. Octopus unless I can get a new wrinkle on it. Like Bill [Mantlo] was starting a storyline with Octopus and it does have a new wrinkle in it; its very wellput. I like pulling villains who have never encountered Spider-Man before but who had been around. For instance, we've seen this guy fight Captain America or the Hulk or whoever and he fights them this way, but up against Spider-Man, it was something different. Basically, its someone different to play off Spider-Man to show what Spider-Man can do. Take Nitro: Her'es a guy who blows himself up; how does Spider-Man handled that? We know how Captain Marvel handled it; how could Spider-Man handle a character like that? Well, here. I'll show you. Basically, I was trying to get back some of the spideryness in the strip that had been lose over the years. Its inevitable, when a character has gone through so many different writers and artists, that the new team will tend to spin off what the previous teams had done. You can't help that, but the thing tends to get diluted after a while. You gotta get back to what made this character really great.


What others say: In a post for Chasing Amazing, Mark Ginnochio explains how this story was the perfect example of set-up and payoff. It was #7 on CBR's list of the best Spider-Man stories and #9 on Complex.com's Top 25 list. Wizard Magazine liked it even more than we did, declaring it on multiple occasions as the best Spider-Man story ever. In their 105th issue, they declared it the seventh best comic book of all time, behind Watchmen, Batman: The Dark Knight Returns, Batman: Year One, Daredevil: Born Again, Batman: The Killing Joke and X-Men: The Dark Phoenix Saga.

Elsewhere on this board: Bulletproofsponge summarized the story as part of the Spider-Man classics series. 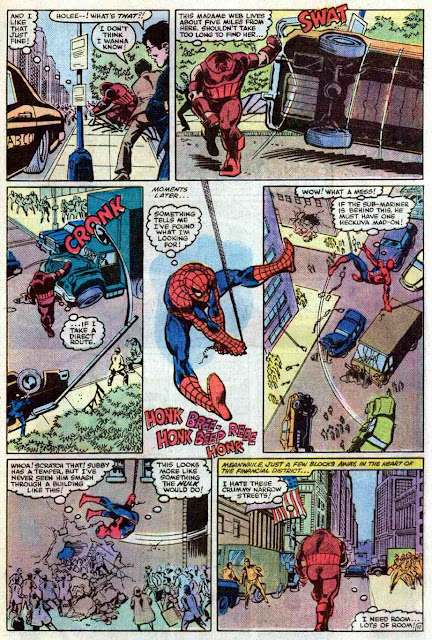 The set-up to the fight is excellent. I just love Spider-Man's train of thought. He was concerned that he might have to fight the Sub-Mariner, as Madame Web predicted that the enemy would come out of the water. And now he's slowly starting to realize that he would have been lucky to fight Namor. The sequence with Spider-Man swinging past the damage in the direction of the monster responsible is just one of the those definitive superhero moments that defines the superhero in general. 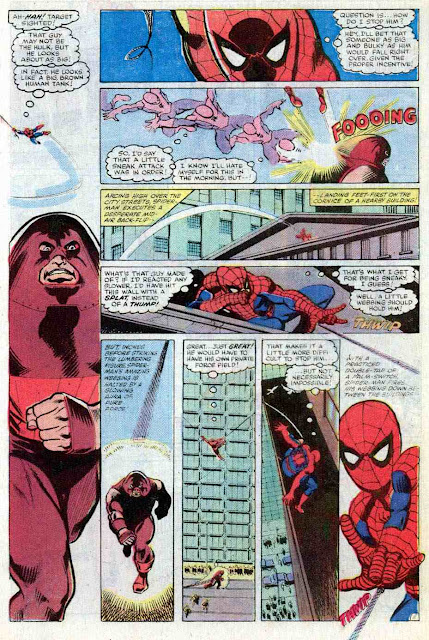 I also like the idea that Juggernaut doesn't even notice Spider-Man's initial effort against him. It's a great example of just how hopelessly outclassed the wall-crawler is. 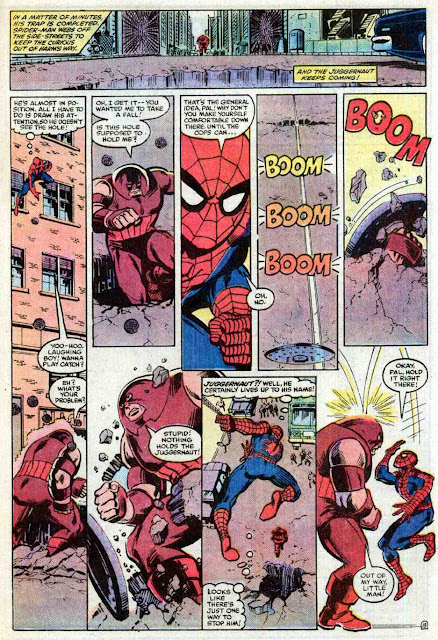 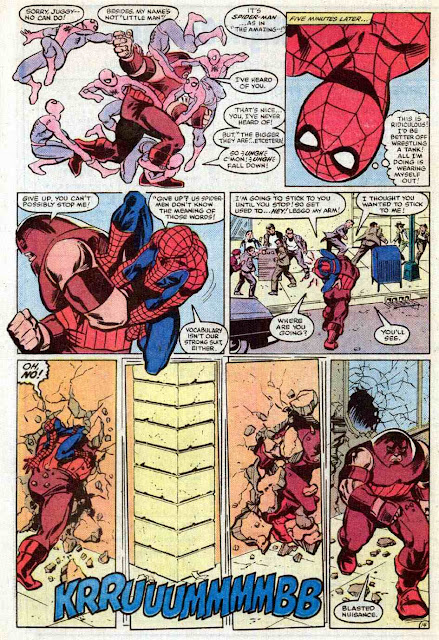 And now Spidey finally gets Juggernaut's attention and the battle is underway. And the contrast in their demeanor is excellent. Spider-Man is just making quips, while the Juggernaut loses his patience. And it took Juggernaut about five minutes to get annoyed enough that a violent response is merited. These little details elevate this from an above-average fight scene to the best fight scenes in any Spider-Man comic. 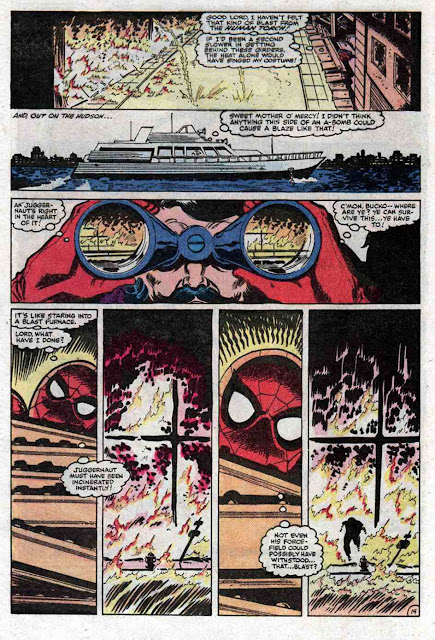 This scene is just excellent. Spidey has slammed a gas tanker into the Juggernaut. And before he learns that Juggernaut has remained unscathed, he starts to consider the ethics of his action, worried that he may have killed his enemy, And then the villain who can't be stopped keeps coming.

The Juggernaut routinely appears on lists of the best Spider-Man villains, and this story is why. He never had a moment quite this impressive in the X-Men comics. 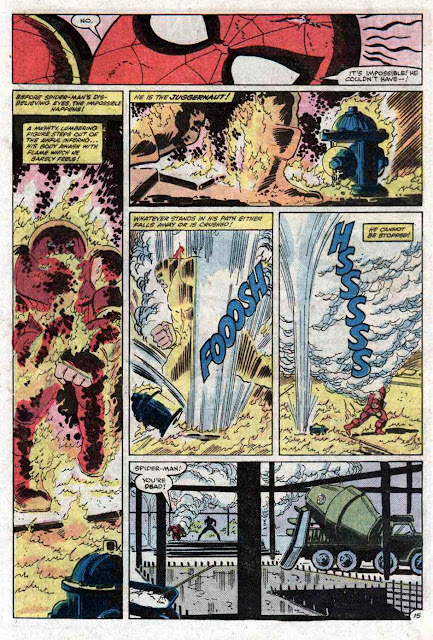 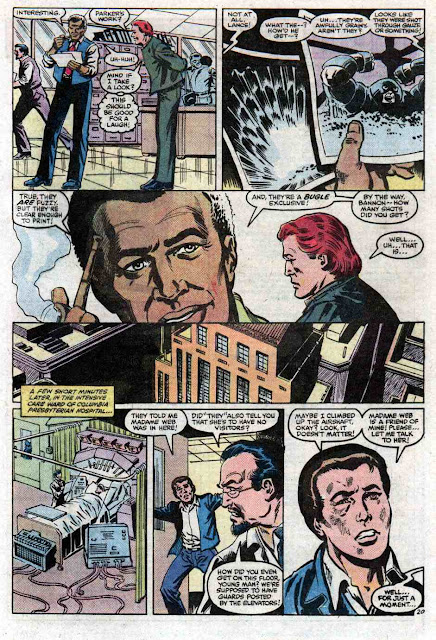 There's something really disconcerting about seeing Peter Parker actually injured after a fight. It had been done before and since in stories that appeared in the Top Ten.

I also appreciate the detail about Peter's photos coming out unusually, right before Lance Bannon gets his comeuppance.