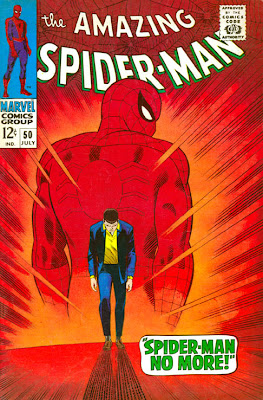 Now we're approaching the top twenty of our list of the best Spider-Man stories to date.

What Happened: Peter Parker decides that he's been spending too much time as Spider-Man, so he quits. Jonah is ecstatic, and a new bad guy decides that this is the perfect opportunity to take over Manhattan's criminal organizations. A former supervillain makes an ill-advised decision to challenge the new Kingpin of Crime, ensuring that Spider-Man will have his hands full should Peter Parker remember the lesson of Uncle Ben's death.

Why It's In The Top 50: Mister Mets praises the story's handling of Spider-Man, the Kingpin and J Jonah Jameson.


It's one of the most iconic Spider-Man stories, but it also has one of J Jonah Jameson's strongest arcs. First, he contributes to Peter Parker's monumental decision. Then he gets his comeuppance in a memorable way. And then agents of the Kingpin pay him a visit in order to shut him up. Lee and Romita are great at showing the integrity of one of the best comic relief characters in the superhero genre. And that's before his stupidity gets someone killed.

Spider-Man's realization that his private life isn't all that important is also rather daring. And it's a lot of fun when he's back in action, letting the criminal world know that he's not finished with them. I love his response to a crook who wondered why he took a punch "I had a king-sized itch back there, and I figured if I waited long enough, one of you pussycats would scratch it for me."

The Daredevil comics took the Kingpin, but this debut was enough to solidify him as one of Spider-Man's greatest enemies. He's calculating, imposing and still constantly underestimated. It's a helluva winning formula. 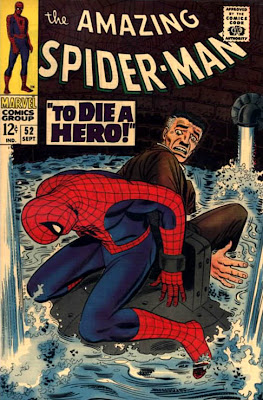 What the pros say: In his introduction to the Marvel Visionaries: John Romita Sr. hardcover, John Romita Jr. recounts the influence of Amazing Spider-Man #50.

A great moment in my father's and my relationship was sitting next to him at the screening of Spider-Man 2 at New York's Ziegfeld Theater and seeign the smile on his face when Peter Parker walks away from his discarded costume mimicking the famous "Spider-Man No More" issue he drew (Amazing Spider-Man #50). It was a smile of gratification underplayed and humble as is typical of my father. It reminds me of when I spoke to director Sam Raimi about the possibility of working on storyboards and character designs for the Spider-Man movies. It occurred to me as I saw my father's issues of Amazing Spider-man spread all over his offices that I wouldn't really be needed as a consultant because they already had my father's years of work to refer to.

In an interview with Danny Fingeroth in the inaugural issue of Write Now! Magazine, Stan Lee explained his take on J. Jonah Jameson.


I don't know what was in my mind when I wrote the relationship between Peter and Jonah Jameson. But I think I have always felt there is always friction between an employee and an employer. I mean, I was very close and a good buddy with my boss Martin Goodman who was the publisher when I was editor, but there was still friction between us. Also, I tried to inject humor into the strip when I could. I couldn't think of anything funnier than to have a guy he worked for hate Spdier-Man, and not know he was really Spider-Man, and even Peter Parker because this guy didn't like teenagers to begin with. I think Jonah Jameson is just an amalgam of all of the narrow-minded adults I knew, and I knew many.

What others say: "Spider-Man No More" was #4 on complex.com's list of the top Spider-Man stories. Al Sjoerdsdma of spiderfan gave every issue five stars. Mark Ginnochio of the Chasing Amazing blog recalls the experience of getting that copy of Amazing Spider-Man #50. He considers the end of the issue one of the great "Stand Up and Cheer" moments. 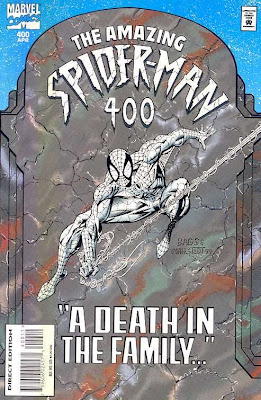 What Happened: Normally, we want to avoid spoiling the end. But even if this wasn't widely known as the one in which Aunt May dies, it had a cover of a gravestone and it's largely about Peter and Aunt May. The tragic death of the beloved Aunt May. Just before her death May reveals a secret to Peter, a secret that she had been keeping for a long time.

Why It's In The Top 50: Jesse Brown looks back at the story.


This was a very emotional tale and end of an era for Peter. His Aunt May for his entire life had been the closest thing to a mother for him and a huge inspiration. Her "death" ultimately brought Peter and Mary Jane closer together. May's death was given the weight and respect for her character it truly deserved.

It was the soft and quiet farewell that you would hope to share with your elders. It served as a strong conclusion to her character arc, and highly memorable event in the overall timeline.

What the pros say: J.M. DeMatteis is very proud of this story, as he explains in the book Comic Creators on Spider-Man:

If I had to pick a handful of my best stories, Amazing Spider-Man #400 would definitely be among them.  As with Sal on Spectacular #200, we had this sequence where Mark Bagley just nailed the scene.  His art was so emotionally rich that I didn't have to write a line, and it worked out just beautifully.  After the story was published, I got a call from John Romita Sr. who told me that this was one of two times in his entire life that a comic book story made him cry.  Can you imagine how that call made me feel?  It was like Santa Claus personally showed up with my Christmas present.

Mark Bagley discusses his collaboration with DeMatteis in the same book:


I got to do some interesting stuff with Marc, like the death of Aunt May.  Between you and me, she's still dead as far as I'm concerned.  I thought Amazing Spider-Man #400 was one of the best Spider-Man stories ever done.  The writing was spectacular, the inking was really good, and some of my pencilling was actually adequate.  It obviously worked pretty well.  My wife cried when she read it.

What others say: "The Gift" was #13 on complex.com's list of the top Spider-Man stories. Mark Ginnochio of the Chasing Amazing blog remembers the anticipation for the issue.

Related Stories: "The Gift" was part of the much larger Clone Saga storyline. It was later revealed that the Aunt May in this issue was a professional actress hired by Norman Osborn in a story called "the Final Chapter". 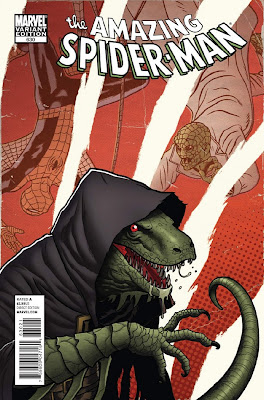 What Happened: With the unwilling help of Madame Web, Ana Kraven has been making Spider-Man's life quite difficult. While Spidey deals with unemployment, an evil version of Aunt May, and the realization that his friends with benefits relationship with the Black Cat isn't what he thought it was, Curt Connors once again falls off the wagon and transforms into the Lizard. Ana Kraven interferes, making sure that this will not fit the usual pattern of Lizard stories. One of Spider-Man's oldest enemies is changed forever, as things get nasty. Really nasty.

Why It's In The Top 50: Mister Mets explains.

The Lizard's my favorite Spider-Man villain, so I was looking forward to his upgrades in "Shed." It's the highlight of the Gauntlet period, and probably Wells's best Spider-Man work. This is the most effective use of Ana Kraven manipulating Madame Web's visions of the future, twisting the typical conventions of the Spider-Man/ Lizard relationship. Bachalo's work was appropriately moody, and Rios's fill-in work wasn't bad. The story also moved along Peter's relationships with Carlie, the Black Cat and Anti-May quite well. I had high expectations when I heard about it, and it lived up to that standard. It truly is the biggest Lizard story. And probably the best.

This is Spiderfan001 favourite Lizard story:


What I loved about "Shed" was how Zeb Wells got into the Lizard's head and depicted the ongoing mental battle between Curt Connors and his scaly alter ego.  Then, midway through the story, Wells takes all the familiar elements we associate with the Lizard and fearlessly takes a wrecking ball to them, leaving the character in a new and interesting place.

What others say: David Utzemeti of Comics Alliance calls it a grim and gritty comic done right.  It ranked #14 on IGN's 25 greatest Spider-Man stories list. Gerard Delatour of the Spider-Man Crawl Space thinks it may just be the worst Spider-Man arc he has ever read. Neil McClean of spiderfan gave the story generally negative reviews as well.