Here it is, the conclusion to the Ends Of the Earth series we've been following so closely. Unfortunately, it did not come anywhere close to the last event- Spider Island. Anyway, here it is.

The story
It all starts with Mysterio and the good guys, fighting the mind controlled Avengers. After dozens of fight scenes, including a rematch between Spider-Man and Spider-woman ( with kung-fu skills this time). Half way through, like I anticipated, Spider-Man remembers to use his magnetic webbing.

Unfortunately, he soon finds out that he has run out of it, along with a number of his other gadgets. It all falls upon Mysterio, who suddenly remembers he has something that has the same effect as Spider-Man's magnetic webbing.

As soon as the Avengers are free, nuke missiles go flying out of the ground into space. I'm guessing they explode up there and the Octavian lens magnifies its effects on earth. Anyhow, Iron Man, Thor and Red Hulk go up to space to destroy them. The other Avengers are all knocked out on the floor. Pretty convenient that the only ones awake were the ones who could fly, or jump real high.

Mysterio then decides to retire from being a good guy and performs a disappearing act after leading Spidey to Ock's main base, and giving him a machine with which to go there. 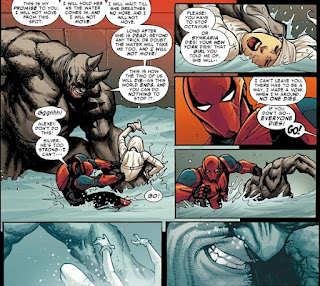 Once in the base, Spider-Man and Sable confront Rhino. Rhino catches Sable and taunts Spider-Man, saying he will not move until both he and Sable drown. ( In case you're wondering, the place is flooding because Dr Ock is pushing the system to complete the lens in time. ) By doing this, Spidey will fail because Sable would have died. Rhino seems to get a kick out of it, but doesn't really try to stop Spider-Man from finding Dr Octopus.

Spider-Man eventually finds Dr Octopus and takes him out. Being Spider-Man however, with his silly no one dies policy, he save Dr. Octopus from drowning. The issue ends with Spider-Man mourning over the death of Sable.

Thoughts
Did Sable really die? I highly doubt she did. I'm sure she found a way to survive, whether we find out in the next issue or in the issues ahead.

I liked the fact that Sable made a reference to MJ when she told Spidey to leave her, else 'that girl she was telling him about' would die.

Also, Mysterio forgetting about how he could have actually stopped the mind controlled Avengers, after complaining so much about going up against them, was pretty lame. What was not lame however, was seeing Mysterio take on the Red Hulk, using a giant statue. You have to read the issue to appreciate it.

Overall, still an okay issue series in my opinion.